Microsoft (NASDAQ:MSFT) has been one of the true all-stars of this bull market. Despite its massive $1 trillion-plus market capitalization, the company just capped off a fiscal year (ending June 30) in which it grew revenues by 14% to $125.8 billion and operating income an even better 23% to $43 billion. 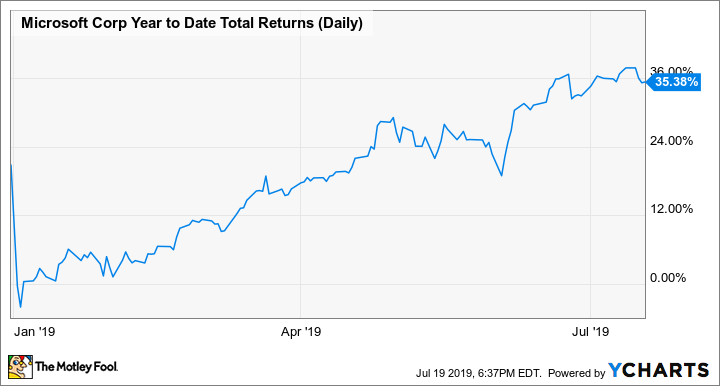 With the stock at all-time highs and trading at more than 30 times earnings, some may rightfully wonder if all the good news is priced in already or if the company can keep growing at this torrid pace. But don't listen to the naysayers. Here are three reasons Microsoft's stock is poised to keep the good times rolling.

1. As-a-service segments at your service

Microsoft has perhaps adapted to the cloud computing age better than any other "old tech" company. The company is not only benefiting from the switch to cloud-based software in its core Office and Dynamics applications, but its Azure infrastructure-as-a-service has carved out a de facto No. 2 position, behind only Amazon (NASDAQ:AMZN) Web Services. 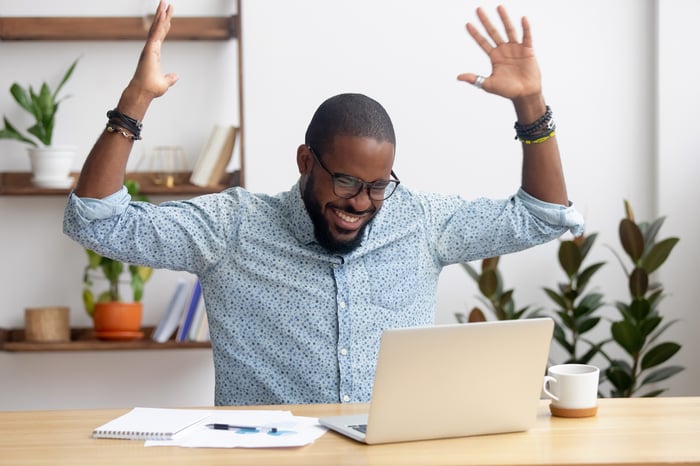 Software delivered as a service via the cloud is much more efficient for software makers, which no longer have to make the effort to produce discs and sell a different version of software every three to five years. This allowed Microsoft to expand gross profits in its Productivity and Business Processes segment by 20% last quarter (in constant currency), above the segment's 17% constant-currency revenue growth. Even better, operating expenses grew at a slower pace than revenue, at just 9% in constant currency, enabling a whopping 25% operating income growth in this segment.

As the cloud-delivered Office 365 and Dynamics 365 platforms make up more and more of Microsoft's total software base, margins should continue to expand. Last quarter, Office Commercial 365 grew a whopping 23% versus just 8% for Office Commercial overall. The company's Dynamics 365 offering grew an even higher 48% in constant currency versus 15% for that segment overall.

Finally, Microsoft's LinkedIn product is also part of this segment, which grew at 28% in constant currency. Social media advertising is a very capital-light business, so I would expect LinkedIn's growth to contribute to the segment's margin expansion as well.

While Microsoft's Productivity and Business Processes are its current cash cow, the company's Intelligent Cloud, which includes Azure infrastructure-as-a-service, is Microsoft's highest growth segment. As this segment grows, it should also become more profitable. Last quarter, Intelligent Cloud grew 18.5% (22% in constant currency), overtaking the Productivity segment and the More Personal Computing segment for the first time.

Being not only the company's largest but also its fastest-growing segment makes Intelligent Cloud a key part of Microsoft's future. The main growth engine is obviously Azure, which surged a whopping 64% year over year in the quarter (68% in constant currency). That's a deceleration from last quarter's 73% (75%) growth but is still good for Microsoft's highest-growth segment and amazing for a business of its size.

One concern is that Microsoft doesn't break out Azure's margins, leading one analyst to question if the unit is profitable; however, I think that concern is a bit overblown. Amazon's Web Services division has operating margins near 30%. Since the cloud infrastructure market seems poised to be an oligopoly, I think there's room for others to exist with good margins, even if they don't reach as high as Amazon's.

In the quarter's press release, management noted Azure experienced "gross margin improvement." The overall Intelligent Cloud segment's operating expenses grew 23%, leading to lower operating income growth of just 15%. Still, Microsoft is clearly investing in the future of this high-growth business to catch up to Amazon, and eventually, these investments will moderate as Azure continues to grow.

Finally, another reason for optimism for Microsoft's fiscal 2020 was a huge 25% increase in bookings (in constant currency). Bookings take into account the change in revenue plus the change in long-term contracts that have been signed but not yet recognized. This figure was larger than expected, and management pointed to several large, long-term Azure contracts like the one it signed last week with AT&T. Since this figure grew at a higher rate than overall revenue, it's a bullish sign for revenue growth in 2020 and beyond.

The ultimate buy and hold?

It's no surprise that Microsoft's stock has continued to push higher. With solid low-teens growth, profit expansion, and the "sticky" nature of enterprise cloud and software contracts, Microsoft still appears to be a solid long-term holding, even at current all-time highs.