Please ensure Javascript is enabled for purposes of website accessibility
Free Article Join Over 1 Million Premium Members And Get More In-Depth Stock Guidance and Research
By Dan Caplinger - Jul 23, 2019 at 11:18AM

The stock market jumped out to early gains Tuesday morning.

Earnings season kept rolling forward Tuesday, and Coca-Cola ( KO 0.89% ) saw substantial gains as the soft-drink giant made progress toward accelerating its future sales growth. Harley-Davidson ( HOG -2.33% ), however, showed more volatility in its stock price, as investors fought over whether good bottom-line performance was enough to eliminate concerns about sales trends.

Coke gets a pop

Shares of Coca-Cola climbed more than 5% after the beverage giant reported its second-quarter financial results. Investors reacted positively to the recent efforts that Coca-Cola has made to try to innovate and keep up with changing consumer preferences, and the company believes that there's a lot more progress to come. 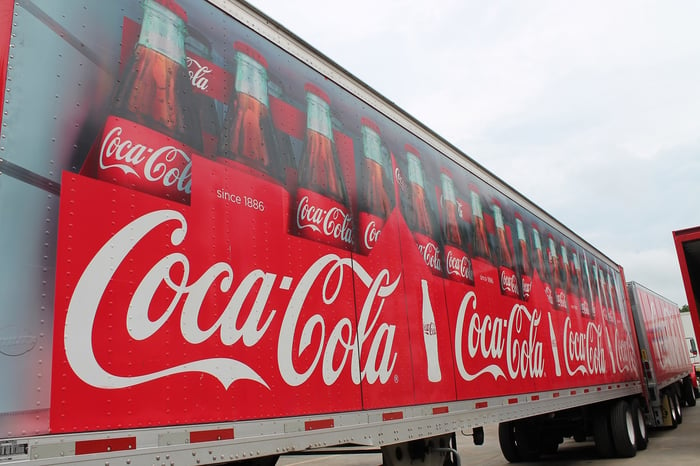 During the quarter, Coca-Cola saw sales climb 6%, with all of that growth coming organically through higher volumes of concentrate sales, as well as a more favorable sales and price mix. Adjusted earnings per share managed to post a 4% rise despite seeing 9 percentage points of downward pressure from the strength of the U.S. dollar versus foreign currencies.

Coca-Cola pointed to several drivers for its growth. The Coca-Cola Zero Sugar brand has done extremely well, responding to consumers' shift away from sugary soft drinks, and the new Coca-Cola Plus Coffee brand showed the beverage giant's willingness to innovate. Elsewhere, the company's acquisition of Costa Coffee led to a chilled coffee beverage in the U.K., and the new Coca-Cola Energy product has seen a good reception in select European markets.

In response to the strong showing, Coca-Cola updated its guidance. The beverage titan now expects 5% growth in organic sales for the full 2019 year, up from its previous 4% prediction, and it sees earnings remaining relatively steady despite a negative currency impact of 7 to 8 percentage points. With a clearer strategic pathway ahead, investors are feeling more confident about Coca-Cola's prospects for the long haul.

Meanwhile, shares of Harley-Davidson were volatile, rising 2% as of 11 a.m. EDT after having dropped as much as 4% at the beginning of the trading session. The motorcycle manufacturer's second-quarter results were to blame for the turbulence as investors tried to parse through the pros and cons in the report.

On the positive side, Harley-Davidson delivered a much better profit performance than most had expected. Even though adjusted earnings of $1.46 per share were down 4% from year-ago levels, they nevertheless held up well in the face of restructuring plan costs and tariffs.

Yet sales issues remained dire. Worldwide retail sales were down 8.4% year over year, with an 8% drop in the U.S. retail market. Harley said it expects those problems to continue throughout 2019, adjusting its motorcycle shipment guidance down to a range of 212,000 to 217,000 for the full year.

Harley-Davidson remains convinced that its long-term strategy to optimize its manufacturing operations while partnering with global motorcycle makers in foreign markets should pan out. The More Roads plan includes Harley's collaboration with Qianjiang Motorcycle in China, which the motorcycle icon hopes will lead to expanded access throughout Asia. Shareholders don't seem quite as confident, but signs of a possible bottom in profit could be the first indication that Harley's turnaround efforts are starting to work.