According to recent published reports, smartphone giant Apple (NASDAQ:AAPL) is in "advanced talks" to acquire Intel's (NASDAQ:INTC) mobile phone modem business. The modem is the chip inside your phone that connects to your wireless-carrier network and is thus most responsible for a lot of the speed and latency you experience on your smartphone.

After Apple settled its lawsuit against Qualcomm (NASDAQ:QCOM) over the latter company's high licensing fees, Intel promptly announced that it would be winding down this unit, as it didn't see a path to profitability. Apple had tapped Intel to attempt to develop a 5G modem in time for 2020 so Apple wouldn't have to pay Qualcomm its high fees for its upcoming 5G chips. However, Intel apparently wasn't able to get the design done in time, as modem-giant Qualcomm remained well into the lead. Given Apple's need to deliver a superior user experience, it thus needed to settle with Qualcomm and get going on 5G.

As part of Apple's settlement with Qualcomm, it signed a six-year licensing agreement to use Qualcomm's chips. Therefore, why would Apple now be considering paying upwards of $1 billion or more for a unit that was already losing money, especially since it won't be able to use the technology at scale for six years? 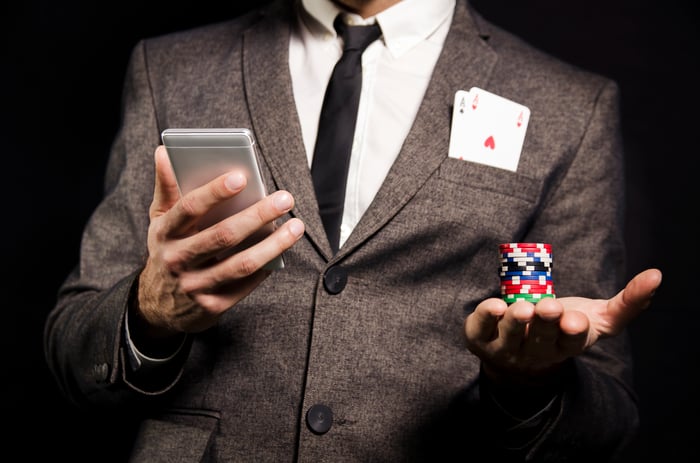 Apple is thinking about the long term

While Apple may have the next six years covered for 5G modems, it's pretty clear that it would like to be free of Qualcomm. The semiconductor manufacturer actually writes very restrictive and expensive terms into its contracts, as it owns many of the core patents behind mobile phone technology.

In fact, Qualcomm's licensing and contract practices have earned it the ire of the Federal Trade Commission (FTC), which filed a suit against the modem giant. In May, the FTC actually prevailed in its case against Qualcomm in federal court regarding its business practices. Though Qualcomm is appealing the decision, the giant's business model has some uncertainty about it going forward.

However, there is no guarantee Qualcomm will lose its appeal or be forced to materially change its practices. As such, Apple is thinking about the longer-term consequences of being beholden to another large and powerful company.

In recent years, Apple has taken over the design of many components that make up its phones. It already designs its proprietary A12 system-on-chip, which contains a CPU, GPU, and neural engine in an integrated system. Apple also recently paid $600 million for the battery-management chip division of Dialog Semiconductor.

The advantage of producing its own components enables Apple to coordinate component design with the overall design of the phone, streamlining the process and differentiating Apple's performance versus competitors. Therefore, it's logical that Apple would want to extend this to the phone modem in the future -- if it can afford to do so.

It's actually not a bad price

While $1 billion-plus may sound like a lot of money, the total costs -- in addition to the added cost of bringing on new engineers -- would likely amount to just a drop in the bucket for Apple, which had nearly $113 billion in net cash and about $225 billion in total cash at the end of the last quarter. Intel's unit is also not some fly-by-night operation. Intel had actually acquired the unit from Infineon Technologies in 2011 for $1.4 billion.

Therefore, Apple might actually be getting a deal if the final sale price falls below that figure. The move would also greatly accelerate Apple's efforts to produce its own chip versus trying to develop the technology from scratch. While Qualcomm dominates these products, the Intel/Infineon unit also owns many patents and employs engineers that would be costly or impossible for Apple to develop or hire in a timely manner.

Apple is already paying Qualcomm more than this every year

Finally, the transaction is far, far less than what Apple is already paying Qualcomm. Although details of the settlement were not disclosed, analysts at UBS estimate that Apple paid Qualcomm $6 billion in a one-time payment, along with roughly $8 to $9 per iPhone going forward. In Apple's most recent fiscal year, it sold over 217 million iPhone units, so at $9 per phone, that amounts to nearly $2 billion in theoretical payments to Qualcomm per year.

In that light, paying $1 billion for a unit that could save Apple $2 billion (or more) even six years out is still a pretty good investment -- if the smartphone giant can eventually produce a viable modem competitor. After all, it will have at least six years to come up with one.