Please ensure Javascript is enabled for purposes of website accessibility
Free Article Join Over 1 Million Premium Members And Get More In-Depth Stock Guidance and Research
By Eric Volkman - Jul 25, 2019 at 7:40AM

The term "tech dividend stock" used to be an oxymoron. Not anymore.

It wasn't that long ago that the terms "tech stock" and "dividends" rarely appeared in the same sentence. Tech stocks were synonymous with fast growth and often didn't have the available funds to divert toward paying out a dividend. But times have changed: More than a few tech companies, buttressed by high cash flows and modest expenses, have instituted and maintained dividends.

It's great to live in a world where we as investors can have our cake and eat it, too. All four of these tech stocks still have encouraging growth potential, and each pays a reliable and steady dividend. 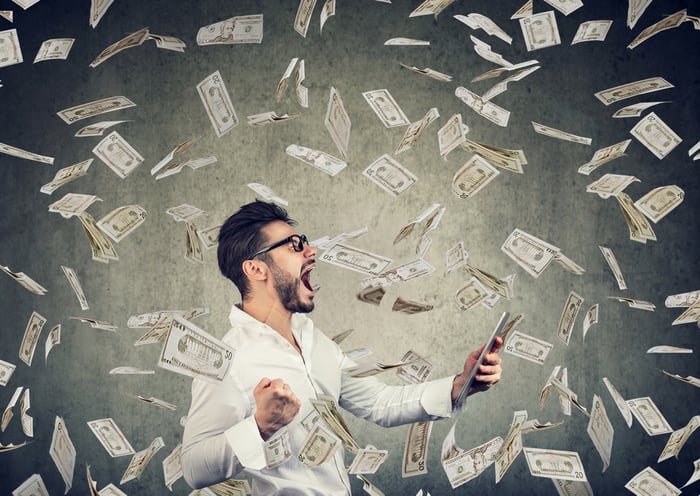 Some investors fret that Apple ( AAPL 3.55% ) is struggling to boost sales of its iDevice lines of products. The worry is that this means that the company's hot growth story is winding down.

I beg to differ. Several of the company's newer revenue streams, such as those from its services business and the company's wearables, home and accessories market segment, are growing at highly encouraging rates. On top of that, the coming of 5G connectivity will be a boon for hardware makers like Apple; there's nothing like a big upgrade cycle to get consumers excited about purchasing new devices and taking advantage of functionalities.

Meanwhile, Apple is sitting on a mountain of cash. Its free cash flow was over $64 billion at the end of its last fiscal year, well higher than the previous year's $51 billion. This has given the company plenty of scope to raise its dividend, which it has lately done every year, and will probably keep doing as the cash continues to flow in.

At the moment Apple's quarterly payout is $0.77 per share, which at the stock's current level yields about 1.5% annually.

We live in a world that is continuously getting ever more networked, and the company providing the gear that forms the foundation of these networks is Cisco ( CSCO 1.97% ).

Our need for ever-faster and better connectivity is a key reason why Cisco continues to boast encouraging growth rates. In its most recently reported quarter, the king of networking equipment's revenues rose by 6% year over year, while non-GAAP (adjusted) net profits increased by 8%. Analysts expect both metrics to continue rising.

Like Apple, Cisco operates in a business with high margins. This throws off cash, and the company's cash flow is consistently well in the black. It has also been more than sufficient for a dividend raise every year since it initiated the payout in 2011.

Cisco's quarterly dividend is $0.35 per share, which at the stock's current level yields about 2.4%.

Intel's ( INTC 3.10% ) most recent quarterly report wasn't anything to write home about. Revenue was flat, due in part to relatively modest business spending, as well as chip-supply issues.

But the company is in the right place at the right time with some of its newer operations. I'm thinking in particular of Mobileye, the Israeli assisted/autonomous driving systems maker Intel bought in 2017. We're still some years away from fully self-driving cars hitting the market, but the technology is developing fast -- so now is the time to own an important asset like Mobileye.

The same goes for Internet of Things (IoT) technology. Intel's IoT segment delivered year-over-year growth of 8% in its most recently reported quarter. Meanwhile, global PC sales might be sluggish, but the company still squeezed out 4% growth in that core segment.

Analysts are predicting that both revenue and earnings per share will rise by around 4% this fiscal year. The company is a solid and reliable cash generator, and its payout ratio is low. Its dividend is fairly generous for the tech sector -- at a quarterly payout of just under $0.32 per share, it yields 2.4% at current share prices.

Flash memory is a virtually mandatory technology in modern electronics, since it's so quick to load. One crucial component of those flash drives is the controller, which manages the data flow between drive and device. Silicon Motion ( SIMO 15.82% ) is a prominent maker of controllers for flash memory.

But life isn't easy for companies involved in flash memory these days. It's a volatile commodity due to a host of factors, not least among them a global oversupply and a lengthening upgrade cycle in the key smartphone segment.

The coming of 5G networks and the ever-snowballing need for more memory in all the devices that connect to those networks will give a boost to demand and supply should return to more appropriate levels. Plus, the assisted driving segment should propel growth for solid-state memory solutions.

So now is a good time to grab Silicon Motion stock while it's out of fashion. The share price for this Hong Kong-based company has fallen by more than 20% in the past year, a slump that has helped lift its dividend yield to 2.8%. The company's current quarterly distribution is $0.30 per each of its American Depositary Receipts (ADRs).