With both video game specialists set to report earnings, Merrill Lynch picks Activision for the win.

Buy Electronic Arts ( EA 2.15% ) and hold Activision Blizzard ( ATVI 0.00% ). Up until today, that was the advice that Merrill Lynch gave its customers -- but no longer.

In a dramatic switch-up in its video game maker ratings, this morning Merrill reversed its opinion on both stocks, upgrading Activision to buy and downgrading EA to hold. 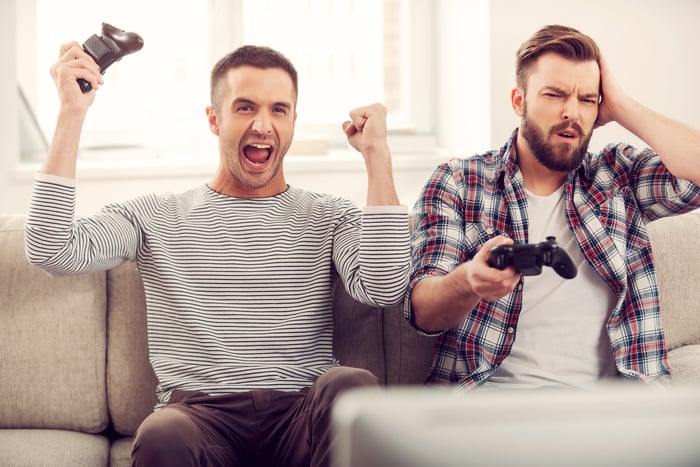 Let's start with the good news.

And yet, with Activision stock down 41% over the past year, it almost seems as if investors are oblivious to these catalysts. Viewed from the perspective of P/E, Activision shares are trading near a "multi-year low," says Merrill -- a valuation the analyst views as unjustified given its belief that, in addition to the above catalysts, the company will show strength in "mobile" gaming via Call of Duty in late Q3 and Diablo in late Q4.

As StreetInsider.com reported yesterday, banker Piper Jaffray just issued a report praising Activision's performance in recent "iOS US app rankings." Although the company's King mobile division will probably still see revenue slip in Q2, Piper believes the revenue drop will only be about 1%, versus the 4% decline the rest of Wall Street is expecting.

Piper's report wasn't nearly so propitious for Electronic Arts, however. In fact, the analyst forecast an 11% decline in mobile revenue for EA this coming quarter -- sharply diverging from consensus estimates of a 1% increase.

Merrill Lynch adds to that warning some concerns of its own: Growth in EA's battle royale product, Apex, "has moderated sharply," says the analyst. As a result, Merrill is now forecasting "less upside to Live Services" for the company, and "a risk" to consensus earnings estimates. Unless income from EA's FIFA soccer games picks up the slack, the game maker could potentially miss earnings when it reports next week.

Merrill Lynch's new ratings come just in time for investors to adjust tack on the two gaming companies before they report their respective earnings -- fiscal Q1 2020 results for Electronic Arts due out after close of trading on July 30, followed by fiscal Q2 2019 for Activision, coming out after the close on Aug. 8.

But should you follow the analyst's advice? Let's crunch some numbers and find out. Valued at $36 billion in market capitalization, Activision Blizzard remains by far the more valuable company -- EA is valued at only $26.4 billion. Then again, that makes sense. After all, Activision's $1.8 billion in trailing earnings dwarf the $1 billion EA earned over the last 12 months.

On the other hand, though, Activision's free cash flow of less than $1.6 billion runs about 10% below the company's reported earnings. EA's cash profits, in contrast, come in over $1.4 billion -- a full 40% above reported earnings.

And on top of that, most analysts -- Merrill obviously excepted -- expect Electronic Arts to slightly outgrow Activision over the next five years, positing a 10.9% growth rate for EA, versus 10.6% growth for Activision, according to data from S&P Global Market Intelligence.

Valued on free cash flow, Activision looks overpriced to me at 22.5 times FCF with its sub-11% growth rate. EA, at 18.8 times FCF and only 11% growth, also doesn't look particularly cheap -- but it's a whole lot closer to fair value than Activision, especially when you take net cash on the balance sheet into account. (EA has more of it than Activision, despite EA's smaller market cap.)

On balance, while I'll certainly give some consideration to Merrill's insight into mobile gaming trends, I still find EA stock to be the better bargain.