The bottom-line revision was a natural result of the company's evolving partnering strategy.

With its second-quarter 2019 earnings release, PayPal Holdings (PYPL -1.50%) demonstrated that through the first half of the year, it made sterling progress across nearly all key metrics. However, there was an interesting wrinkle in the financial picture: Management revised its full-year outlook with a lower top-line estimate, but an increased bottom-line target. We'll discuss that forecast tweak below after walking through the headline numbers and relevant details from the last three months. 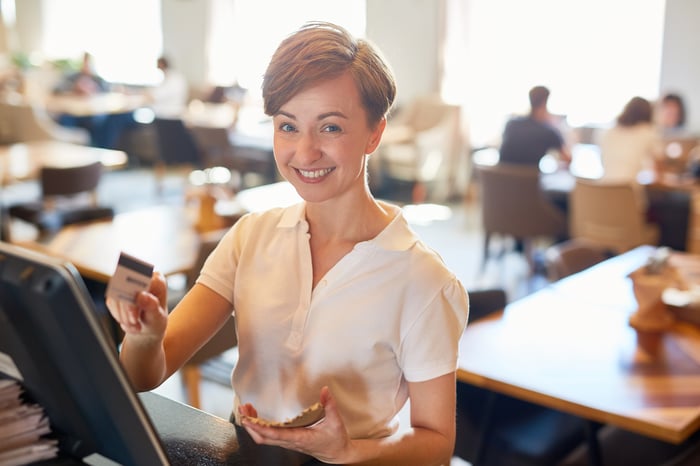 What investors need to understand about PayPal's earnings revision

PayPal had been forecasting full-year 2019 revenue in the range of $17.85 billion to $18 billion, which would add up to year-over-year growth of 16% to 17%. It cut that to a range of $17.6 billion to $17.8 billion, or growth of 14% to 15%. Both sets of estimates had factored in a 3.5 percentage point negative impact from the sale of PayPal's consumer credit receivables portfolio to Synchrony Financial last year.

Finally, the company's expects that its cross-border trade will be impacted by anticipated strength in the U.S. dollar in the second half of the year. International transaction volumes have been rising as PayPal grows: In Q2, cross-border volume grew 14%, and represented nearly one-fifth of TPV.

Even as it dialed back its revenue forecast, PayPal raised its non-GAAP earnings per share (EPS) estimate for 2019, from a previous band of $2.94 to $3.01 to a new range of $3.12 to $3.17. Management cited stronger performance in the first half of the year, as well as unrealized gains from equity investments, as factors behind that revision.

Specifically, PayPal recorded $0.26 per share in unrealized equity investment gains in the first two quarters, and expects to add another $0.03 per share of gains in the third. Subtracting out the $0.08 in gains recorded in the first quarter, and the $0.01 of expected second-quarter gains chalked in during the first quarter, and we can see that most of the full-year EPS revision stems from the change in value of PayPal's investments over the last three months.

What are these equity stakes, which management terms "strategic investments?" As I discussed in detail last quarter, PayPal has evolved its partnering strategy, and is now keen to invest in a wide range of fintech and e-commerce companies as it collaborates with them.

Most prominently, PayPal has invested $750 million in Latin American e-commerce leader MercadoLibre. But in addition to its outsize investments in MercadoLibre and Uber, PayPal has purchased minority equity positions in a range of technology growth companies which complement either the merchant or customer sides of its payments ecosystem.

Such investments are non-consolidated, meaning that both the income earned from them and the unrealized gains (or losses) attributable to them are reported below ongoing operations on the income statement, in the "other income and expense" line item.

As PayPal amplifies its strategic investment game plan, this line item will continue to grow in importance. Indeed, this quarter, equity investments accounted for a full one-fifth of PayPal's GAAP EPS, though this was mostly due to MercadoLibre's soaring stock price, which has more than doubled thus far in 2019.

So what should investors make of PayPal's recalibrated outlook for 2019? For the most part, shareholders can safely look past both sides of the revision and focus on the long-term big picture. As we discussed, the revenue issues are mostly ones of timing, and the bottom-line tweak is primarily due to non-cash items.

Thus, it's best to focus on PayPal's core metrics like TPV (where it's producing phenomenal growth), and the state of its P2P business, which continues to rise courtesy of Venmo, and which will be increasingly monetized over the next few years.

One overlooked strength of PayPal is its cash generation prowess: According to CFO John Rainey, the company generated $1 billion in free cash flow in Q2, or $0.24 in free cash flow for every dollar of revenue. Think of this as $4 billion each year that the organization can use to invest in organic revenue growth and/or engage in additional strategic acquisitions.

The outlook for the current period

For the third quarter, PayPal expects revenue growth in the 18% to 19% range, to a top line of $4.33 billion to $4.38 billion. GAAP diluted EPS is forecast to land in the $0.32 to $0.35 range, which includes $0.03 in anticipated unrealized investment gains, and a negative impact of $0.15 from taxes stemming from the company's September 2018 acquisition of European business commerce platform iZettle. Adjusting for this item, PayPal's EPS is slated to grow by north of 50% year over year in Q3.

Is PayPal Stock a Buy After Its 50% Crash?