DoorDash overtook Grubhub (NYSE:GRUB) as America's top third-party food delivery platform in May according to research firm Second Measure. The gap widened slightly in June, with DoorDash claiming 33.8% of the market compared to Grubhub's 32.7% share.

DoorDash's growth is fueled by its dominance of several major urban areas, including Dallas/Fort Worth, Houston, Washington, D.C., Atlanta, Phoenix, and San Francisco. New partnerships, like its recent deal with McDonald's, could help it pull even further ahead. 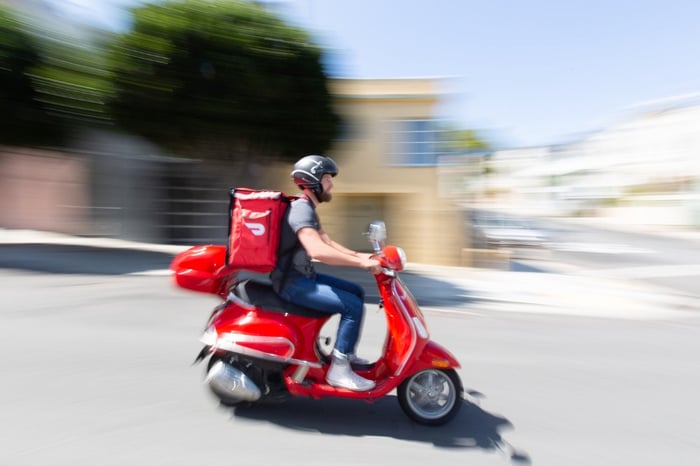 DoorDash was valued at $12.6 billion after its last funding round, compared to Grubhub's market cap of about $6.7 billion, and is widely expected to go public in the near future.

However, DoorDash's business practices, especially the way it subsidizes couriers' wages with tips, recently sparked fierce criticism and calls to boycott the platform. Could those issues throttle DoorDash's growth and send couriers and customers back to Grubhub?

Why are the pitchforks out for DoorDash?

DoorDash pays its couriers a flat base pay based on the time and effort required to make a delivery, which can be as low as $1 per order. Each order also has a "guaranteed" payout, which is either subsidized by DoorDash or a customer's tip. 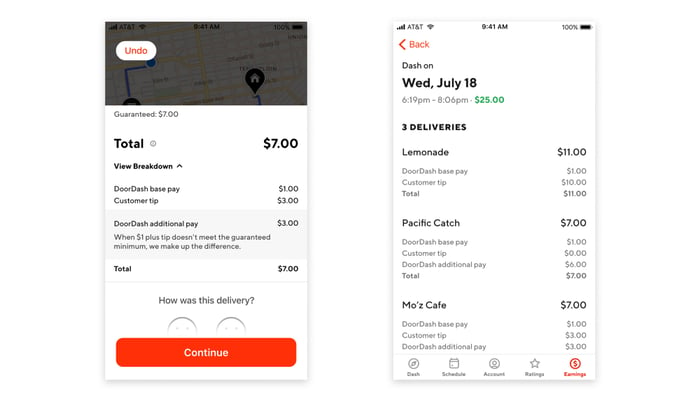 To be fair, most restaurants use customers' tips to subsidize their waitstaff's wages. But DoorDash isn't a restaurant, and its two biggest rivals -- Grubhub and Uber (NYSE:UBER) Eats -- let couriers retain 100% of their tips as extra pay.

After initially defending DoorDash's tipping standards in a blog post, CEO Tony Xu relented and declared that the system would be changed so that a courier's earnings "increase by the exact amount a customer tips on every order." The details were unclear, but we should recall that Xu previously claimed that its couriers received "100%" of their tips -- which they technically did -- without mentioning the subsidization of their wages.

But tips might not be DoorDash's only problem. The New York Post recently collected a list of "horror stories" about the service, including violent confrontations between couriers and restaurant owners, unsanitary behavior from couriers, and couriers consuming parts of customers' meals. Restaurants also previously complained about DoorDash delivering its food without its permission, and the platform suffered a data breach that led to unauthorized orders last year.

Why Grubhub has a more sustainable business model

DoorDash quietly subsidized its couriers wages with tips for a simple reason: it isn't profitable. Last year, DoorDash claimed that it was "profitable" after excluding overhead expenses like wages and rent.

That statement didn't make sense, since wages are a top expense for food delivery platforms. Meanwhile, Grubhub remains profitable by both GAAP and non-GAAP measures, although its bottom line was weighed down by higher marketing, tech, and logistics expenses in recent quarters.

Grubhub faced similar issues as DoorDash before, including issues with bad couriers, late orders, and involuntarily registering websites for restaurants. However, Grubhub's core business model generates profits, while letting couriers keep their tips as extra pay -- while DoorDash can't even stay profitable after letting customers subsidize its couriers' wages with tips. Therefore, I'd take Xu's promise with a grain of salt and expect other payment controversies to arise at DoorDash.

Will the bad press send diners to Grubhub?

Second Measure reports that about a fifth of DoorDash diners also use Grubhub, and vice versa. If the recent news about DoorDash actually sparks a boycott, some diners might use Grubhub more frequently and help the former market leader catch up. DoorDash could also lose momentum in its top markets, giving Grubhub a chance to expand beyond its top markets of New York City, Chicago, Boston, and Philadelphia.

However, Grubhub could also be dragged down by negative news about DoorDash, which casts many of these courier platforms in a negative light. Many couriers also simultaneously run deliveries for Grubhub, DoorDash, and Uber Eats, so issues with couriers could easily spread across all three platforms.

It's too early to tell if the bad press about DoorDash will send diners back to Grubhub. But in the highly competitive food delivery race, DoorDash is starting to look like the hare, gradually exhausting itself against Grubhub's tortoise.