Earlier this month, I bought shares of e-commerce giant Alibaba (NYSE:BABA). Valuations have come down dramatically over the last year for Chinese tech stocks. The threat of regulations and the slowdown in China's economy are likely to blame, but that's created a great opportunity for investors with a long-term approach to scoop up shares of some of the fastest-growing tech companies in the world.

Here are four reasons I decided to buy shares of this Chinese tech giant. 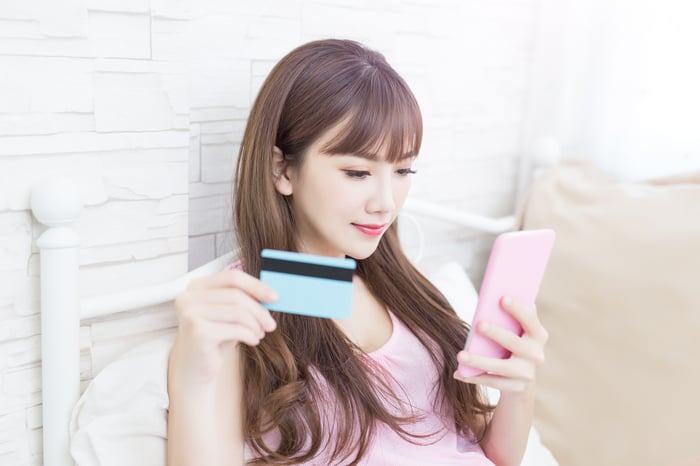 Alibaba operates the largest commerce business in the world, measured by gross merchandise volume. The company's mission is to help other businesses reach buyers more efficiently. Top consumer brands, including Apple and Nike, rely on Alibaba's Tmall to sell their goods to a growing middle class in China.

The country is a very difficult market for foreign companies to penetrate. Two reasons for that are the problem of counterfeit goods and the difficulty of building the infrastructure to support expansion. Alibaba solves both problems for foreign companies by identifying and removing counterfeit goods on its marketplaces, and by offering logistics services through its Cainiao network.

It's better to think of Alibaba as a problem solver for businesses and consumers. It has 654 million users across its commerce platform, which provides the company with lots of data to help other companies with marketing and supply chain management. It's also a massive built-in customer base that foreign brands can immediately tap into by listing their goods for sale through Alibaba's marketplaces.

The commerce business makes up most of Alibaba's annual revenue, but cloud computing is the future of the company, according to CEO Daniel Zhang. Alibaba Cloud dominates the market in China, and it's growing fast -- last year, its revenue soared 84% year over year.

The cloud business makes up less than 7% of Alibaba's revenue, but it will become a larger contributor to the top line soon enough. A few things that are fueling its growth are global expansion and serving foreign companies that need to invest in local data services to comply with China's data center laws.

All said, the potential of Alibaba Cloud is a significant long-term growth catalyst.

3. It's shaping the future of retail

If you want to know what the future of shopping will look like, consider Alibaba's New Retail initiative. It is doing several nifty things, like using robots to deliver food and room service at a company-operated restaurant and hotel.

At its Hema supermarkets, customers scan bar codes with their phones to get information about certain items, including recipes. Alibaba tracks what items they buy and is able to offer recommendations as it learns their shopping behavior. Hema is quickly gaining popularity, and there's massive potential for store expansion.

Alibaba is also allowing people to order a car from automobile vending machines. The company is working on other high-tech projects in healthcare and smart cars using robotics and artificial intelligence.

At the center of Alibaba's strategy in all these areas is its Alipay mobile payment service -- one of the two dominant digital payment services in China along with Tencent's Tenpay. This gives Alibaba an advantage in being able to cross-sell its various commerce businesses, which cements its top position as the largest commerce platform in the country.

4. The growth and valuation

It's all the cool tech Alibaba is working on, coupled with a growing middle class in China and the decrease in the valuation over the last year, that persuaded me to buy the stock.

The numbers are super impressive: Revenue increased 51% last year, an awesome feat for a company that generates $56 billion in revenue. Profits have been climbing steadily, too, although operating costs to support cloud growth could put pressure on margins over the next few years. But these are investments that should pay off. Alibaba already generates about $15 billion in annual free cash flow.

It's one of the most dominant and fastest growing companies in the world, and at a forward P/E of 26 times this year's earnings estimate, the stock looks like a good deal to me.