Alibaba's (NYSE:BABA) cloud revenue is on fire. It helped the company grow its total revenue by 41% over the past year in spite of China's economic slowdown.

The company's CEO, Daniel Zhang, highlighted the business during Alibaba's recent earnings call. "Our growth is also driven by the power of Alibaba's cloud and data technology that helps expedite the digital transformation of millions of enterprises," Zhang said on the Jan. 30 call.

And while Alibaba's cloud business is already the market leader in the country, it still has ambitious goals for its future growth. 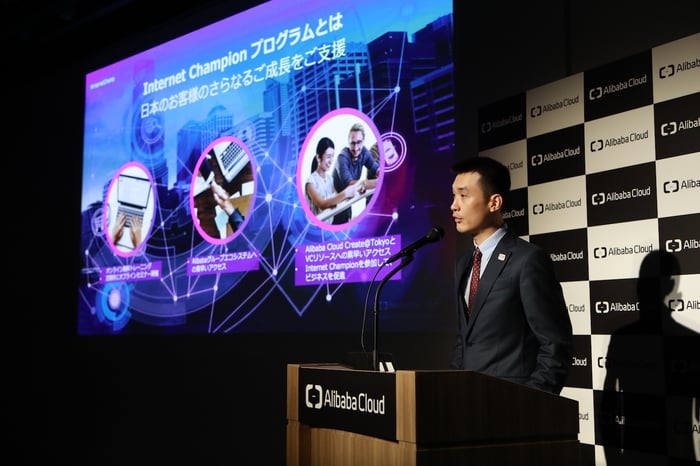 Alibaba introduced its cloud business nine years ago. In less than a decade, it's quickly risen to acquiring over 50% of the market share in China.

Alibaba said the increase in cloud revenue has mainly been due to a boost in spending from its enterprise customers. The company has been continually adding new features to its cloud offerings to drive up customer spending. Last quarter, Alibaba Cloud launched 678 new products and features.

At the end of January, Alibaba launched its second data center in Japan. The company divides its cloud network coverage into availability zones, with each zone containing one or more data centers. With this latest launch, Alibaba Cloud now has 56 availability zones across 19 regions worldwide.

Investors will be waiting to see how much the cloud business grows for the full financial year, which ends in March. Last year, Alibaba's cloud revenue grew 101% year over year to $2.1 billion.

Although Alibaba Cloud is already at the top of the market in China, the company still sees a long runway for the business because of how new the cloud market is in the country. The company believes every business will eventually need to go to the cloud, which would provide a nearly endless runway.

Alibaba also said it wants to start offering more of its own data and technology to its cloud customers. Doing so will help increase the value of its cloud offerings, thus driving up its memberships. For that reason, Alibaba recently named Chief Technology Officer Jeff Zhang as the new president of Alibaba Cloud.

In addition, Alibaba Cloud may be the third top infrastructure-as-a-service (IaaS) public cloud service worldwide -- behind just Microsoft (NASDAQ: MSFT) and Amazon.com (NASDAQ: AMZN) -- but it only has 4.6% of the market, according to Gartner. And the cloud market is far from peaking. In 2017, the global IaaS market grew by about 30% to $23.5 billion, the firm estimates. And for 2019, Gartner estimates that the public cloud services market as a whole will grow by about 17% to $206.2 billion.

From 2016 to 2017, Alibaba Cloud grew its share of the worldwide IaaS market from 3.7% to 4.6%, Gartner estimates. Meanwhile, Amazon's market share dropped from 53.7% to 51.8%. Alibaba Cloud's main objective should be to keep chipping away at that global market share by leveraging its own data and technology to help out its cloud customers.