From time to time, Axon (NASDAQ:AXON) announces significant sales it has made to law enforcement agencies around the world. The lists don't include every order, but they're meant to be a snapshot of what the company is selling and to whom.

Last week, one of those lists came out, and it was the first time the Officer Safety Plan (OSP) 7+ -- which retails for $199 per user per month -- was a significant portion of the announcement. For that price, it includes Taser 7, the Body 3 camera, Axon Records, Signal Sidearm (which tells cameras to begin recording as soon as an officer draws a gun), and more. This is the highest-cost and highest-margin product the company offers, and if it's ultimately successful, it will entrench the company more deeply into law enforcement agencies. 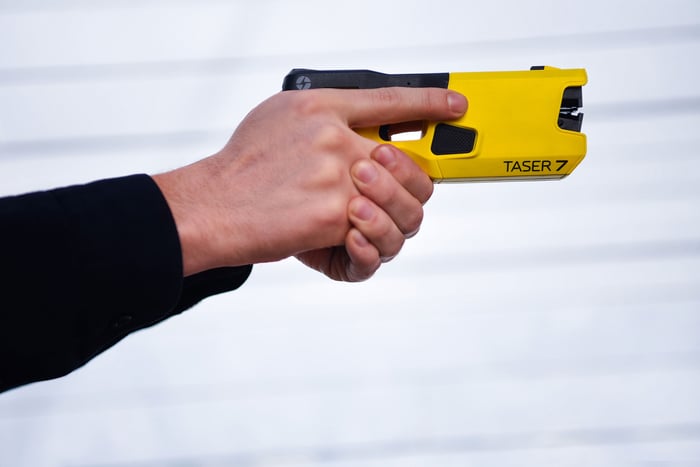 In the most recent announcement, we learned the Glendale, Arizona, Police Department ordered 300 OSP 7+ plans; the Ontario, California, police ordered 296; Irving, Texas, ordered 286; and the Kent, Washington, police ordered 105. In total, the 987 OSP 7+ sales were less than a quarter of the 4,336 weapon or service sales announced, but that's still notable given the fact that the product was only announced late last year.

What management hopes to do is push customers up the value chain with higher value offerings. It wants customers to buy the full suite of Axon products that will drive both revenue and profit growth long term, rather than just buying a taser or a single body camera.

OSP 7+ will be a big growth driver

The OSP 7+ subscription's $199 per month price tag means it will generate about $12,000 in revenue over the course of a standard five-year contract and around $9,600 in gross margin, according to management. This compares with the plan that includes a body camera plus data storage plan, which generates $6,233 in revenue and less than $4,500 in gross margin over five years. So if Axon can push customers to the more expensive product, it's a huge win.

When investors look at Axon's results quarter to quarter, seats booked (cloud storage contracts) and future contracted revenue will show progress booking customers to these long-term deals. Over the past year, seats booked have grown to 371,100 from 226,900, and future contracted revenue has increased to $930 million from $650 million. It's likely revenue per booking will go up as OSP 7+ becomes a bigger part of the business. And given expected gross margins of over 70% for equipment and services contracts, Axon should see improved profitability as its customer base grows.

The long-term benefits of subscriptions

Where value really ramps up is when you start thinking about customer lock-in. Axon's products are increasingly used up and down the law enforcement value chain. OSP 7+ includes weapons and officer body cameras, but it also includes Evidence.com cloud storage and Axon Records, which are used by prosecutors and those in the back office to organize and decipher incoming data. These products will become a key part of their workflow, which will lock agencies into Axon products.

There are few competitors to Axon in law enforcement right now. The company bought VIEVU in 2018, a competitor that once seemed promising in the body camera market. Digital Ally and others have also attempted to gain market share but with little success.

As Axon grows its customers base, it will lock in long-term revenue and keep competitors at bay. That's a great business model for investors and a big reason I think this is a great long-term stock.