Please ensure Javascript is enabled for purposes of website accessibility
Free Article Join Over 1 Million Premium Members And Get More In-Depth Stock Guidance and Research
By Rich Duprey - Jul 29, 2019 at 8:30AM

The motorcycle company pins its hopes on lower tariffs in Europe to reverse the sales decline next year.

To no one's surprise, Harley-Davidson ( HOG 2.57% ) reported yet another quarter of falling sales, with those in the U.S. falling more sharply than analysts had anticipated. But earnings beat analyst expectations, and with upbeat news on tariffs in Europe, the bike maker's stock jumped over 6% higher.

The euphoria, though, may be short-lived. All of the worrisome trends weighing on Harley beforehand are still present, more troubling signs are developing, and it's counting on an unproven new sales direction to lift business in the future. 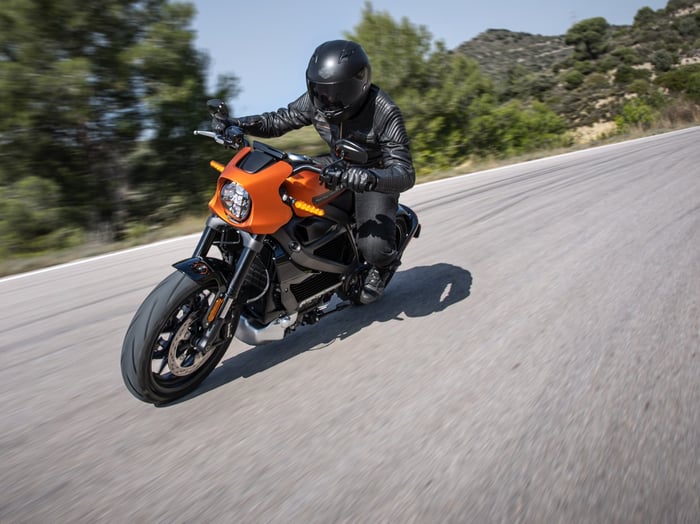 Harley reported U.S. sales fell 8% in the second quarter, worse than the forecast 6% decline some analysts were predicting, and worse than even the 6.4% drop experienced last year. It's the 10th consecutive quarterly decline in sales and 18th out of the last 19 quarters where sales were down year over year.

More worrisome may be that international sales tumbled harder than they did in the U.S., with sales plunging 8.9% from last year. Although emerging markets like China saw sales jump by double-digit rates, there are not enough bike sales there to overcome the large 14% plunge experienced in Europe, which accounts for 47% of total international sales.

However, Harley is hopeful the European Union's decision on tariffs on motorcycles made at its new Thailand facility will encourage more sales. U.S.-made Harley motorcycles currently entering the EU are subject to a 31% duty, but the new bikes that will come out of Thailand will only be subject to a 6% tariff.

Still, the EU took much longer than expected to render its decision, and while Harley-Davidson had been prepared to begin making the bikes in Thailand at the end of October, the delay has pushed back the new bikes' arrival in Europe until the second quarter of 2020.

A bit of good news to go with the bad

Harley-Davidson is trying to juggle the timing of dealer inventory on hand from the higher-tariff bikes currently in place and when it begins shipping lower-tariff models. Still, the European market was much worse than what the bike maker expected, and it's uncertain whether shipping bikes made in Asia rather than the U.S. will be as readily accepted. Although the "Made in America" label is obviously a much bigger selling point in the U.S., it carries some cachet overseas too.

Harley-Davidson believes the impact will be minimal because a Harley plant in Thailand is essentially the same, on the inside, as a U.S. Harley plant, and European bike buyers will understand the tariff situation and the need to deliver an affordable motorcycle.

In the U.S., Harley is preparing to launch the LiveWire electric motorcycle. It has collaborated with Electrify America, which has DC fast-charge stations across the country within 70 miles of each other to give LiveWire buyers the equivalent of 500 kilowatt hours of free charging time over two years.

Harley-Davidson's stock buybacks helped the company support its per-share earnings resuts, with profits of $1.23 per share coming in better than the $1.20 per share consensus estimate of Wall Street. Earnings were still down significantly from last year's $1.45 per share, and had outstanding shares remained constant, earnings would have come in at $1.17 per share.

Ultimately, there is not enough good news to outweigh what is largely still a bad situation, and Harley-Davidson is relying upon crossing its fingers that next year will be better. There is some cause for hope, such as building two new, small-bore motorcycles in China later this year, but this quarter's results did little to dispel the notion that Harley's future remains one of being a much smaller bike manufacturer.