Shares of Ford Motor (NYSE:F) fell more than 7% on Thursday, after the company released its second-quarter earnings report the previous afternoon. Investors seemed to be disappointed with its full-year forecast, which calls for adjusted earnings per share between $1.20 and $1.35, compared to $1.30 last year. Analysts had been expecting EPS of approximately $1.39.

However, a number of temporary factors are weighing on Ford's earnings power this year. These headwinds will start to abate in 2020, with further improvement coming in 2021. As a result, Ford is positioned for strong earnings growth over the next couple of years.

Earnings and guidance miss expectations, but it's not a problem

For the second quarter, Ford's adjusted operating profit was roughly flat year over year at $1.7 billion. Adjusted EPS crept up to $0.28 from $0.27 a year earlier, falling short of the average analyst estimate of $0.31. (On the other hand, adjusted free cash flow improved by $2 billion year over year, moving into positive territory at $0.2 billion.)

As noted above, Ford also provided a full-year 2019 EPS target for the first time. The guidance range of $1.20 to $1.35 fell short of analysts' expectations. However, both of these "misses" can probably be traced to short-term headwinds that analysts weren't anticipating in their models. During the second quarter, Ford wrote down the value of its investment in Pivotal Software by $181 million. Excluding this one-time charge, adjusted EPS would have reached $0.32, coming in just ahead of the average analyst estimate.

Additionally, Ford expects its effective tax rate to rise from 10% last year to between 18% and 20% in 2019. That will reduce EPS by $0.12 to $0.16. Adjusting for the Pivotal writedown and the year-over-year change in its tax rate, Ford's full-year EPS guidance would have been better than what analysts were projecting.

Turnaround initiatives will take time to pay off

Ford's automotive operating profit surged 19% year over year last quarter, as the company reduced its loss in China by more than $300 million. Profitability improved modestly in Europe as well, offset by deterioration in other regions. However, it is important to recognize that outside of China, Ford isn't getting much benefit from its turnaround initiatives yet.

In Europe, Ford recently announced that it will cut 12,000 jobs and close or sell six of its 24 factories by the end of 2020. This will unlock substantial savings, putting Ford's goal of a 6% operating margin for the region within reach. Most of the savings will hit the bottom line in 2020 and 2021, though. Ford hopes to stem its losses in South America with a similar strategy of cutting jobs, closing a plant, and exiting unprofitable market segments.

In its core North America market, Ford has made plenty of money in recent years. That said, its operating margin deteriorated to 7.9% last year, compared to 9.7% in 2016 and 10.2% in 2015. Ford has a good shot at getting its operating margin back into the 10% range, but it could take a year or two to get there. 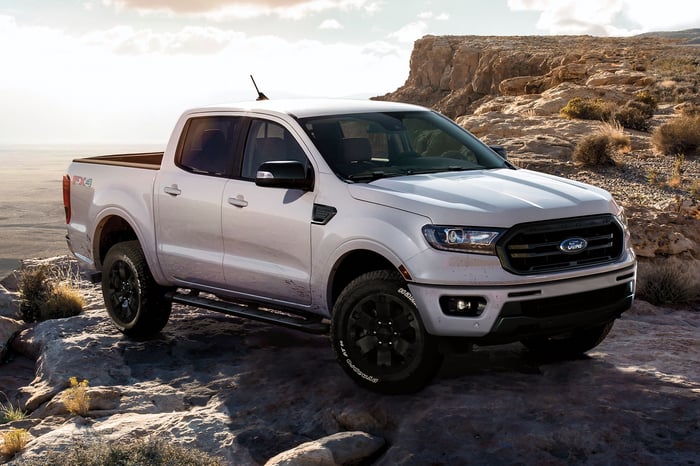 New and updated products are the crux of Ford's profit improvement plan in North America. The company reintroduced the Ranger midsize truck in North America earlier this year, and it will reintroduce the Bronco off-road SUV next year. These models will be vastly more profitable than the small cars they are effectively replacing. Ford is also launching long-overdue updates of its popular Escape and Explorer crossovers and two new Lincoln models in the second half of 2019.

These products should help drive a substantial improvement in Ford's profitability in North America next year. However, the Blue Oval plans to introduce an all-new version of its popular Ford F-150 pickup for the 2021 model year. That will likely require factory downtime next year, reducing production of this massively profitable product. As a result, Ford won't reap the full benefit of updating its crossover and truck portfolio until 2021.

Ford is on the right track

One year ago, Ford announced that it would incur up to $11 billion in restructuring charges over a period of three to five years in order to reshape its business. Obviously, the automaker is still early in that process, and that's why its financial results aren't showing much improvement yet.

However, profitability is already improving in Europe, even though Ford hasn't finished its downsizing effort. The company also has clear, credible plans to get back into the black in South America and make North America even more profitable. In short, Ford's turnaround strategy is beginning to take shape. Investors will have to be patient for a little while longer, but Ford is on track to achieve strong profit growth over the next couple of years.