The machine vision company is seeing weakness in its two most important end markets.

It hasn't been an easy year for companies with significant exposure to the automotive and consumer electronics industries, which happen to be Cognex's (CGNX 1.20%) two largest end markets. There wasn't a lot wrong with the machine vision specialist's second-quarter earnings, but the outlook for the third quarter is disappointing, and investors will likely to have to wait until 2020 before seeing any signs of improvement.

As you can see, the second quarter was satisfactory on a headline basis, but the concern is over the third-quarter guidance and management's commentary and outlook for the rest of the year. 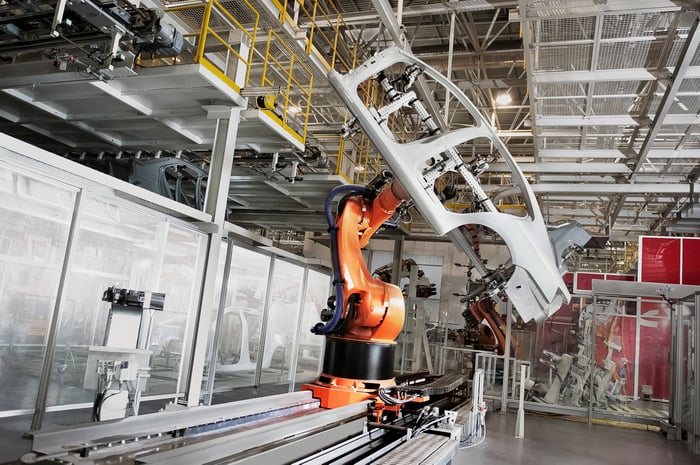 The third-quarter guidance is as follows:

When discussing the forecast year-over-year decline in revenue during the earnings call, CEO Robert Willett attributed it to a $50 million drop in revenue from consumer electronics. Apple is Cognex's largest single customer, and smartphone manufacturing represents a key end market within consumer electronics. Given the context of falling global smartphone sales, it's not hard to see why customers are holding back and reducing capital expenditures.

It's a similar story with the automotive sector, where global light-vehicle production has been declining in 2019. It's an industry that's traditionally been a key market for Cognex due to automotive manufacturers' willingness to adopt automated technologies. In fact, Cognex's automotive outlook has gotten progressively worse in 2019, and Willett now believes the company's automotive revenue will be down 10% for the year.

As Willett summed it up: "[C]onsumer electronics and automotive, our two largest markets that combined have recently been responsible for more than 50% of our revenue, are both contracting simultaneously for the first time in many years."

The Americas region turned out pretty much as expected, with the weakness in consumer electronics and automotive in line with management's commentary on the first-quarter earnings call. The big shortfall in performance versus expectations came from Europe -- specifically from the automotive sector, and particularly from automakers with exposure to China.

On a more positive note, Cognex's logistics sales -- largely to e-fulfillment centers -- are helping to offset the declines in the company's largest industry verticals. Logistics currently make up around 10% of Cognex's sales, and management believes it can grow at an annualized rate of 50% over the long term.

Going into the report, there were some concerns because Honeywell International had talked of a "blip" in large project order bookings in warehouse automation. However, Willett confirmed that logistics continued to grow "at a good clip," and third-quarter guidance had "growth right around that 50% growth rate that we're targeting" baked into it.

That's good news for Cognex, and also for Honeywell, particularly as it supports Honeywell CEO Darius Adamczyk's view that an improvement in orders will come at least by the fourth quarter.

The key question now is when Cognex's factory automation sales will get back on track to the kind of 20% growth rate that management aims for. There are certainly plenty of catalysts for growth, including electric vehicles and possible improvement in smartphone demand due to the rollout of 5G. Moreover, there's a secular trend of increasing adoption of machine vision in manufacturing.

That said, there's little the company can do when its end markets are in a cyclical downturn, and given that Cognex typically takes large orders in its second and third quarters, it's going to be a while before investors start to hear about any significant improvements.