Shares of Under Armour (NYSE:UA) (NYSE:UAA) recently tumbled after the company posted mixed second-quarter numbers. Its revenue rose 1% annually (3% on a constant currency basis) to $1.19 billion, narrowly missing estimates by $7 million, but its net loss narrowed from $0.21 per share to $0.04 per share, beating estimates by a penny.

At first glance Under Armour's numbers looked solid. Its gross margin expanded 170 basis points annually to 46.5%, its operating loss narrowed, and its inventories fell 26%. For the full year it expects its revenue to rise 3% to 4%, its margins to keep expanding, and its operating profit to return to the black. 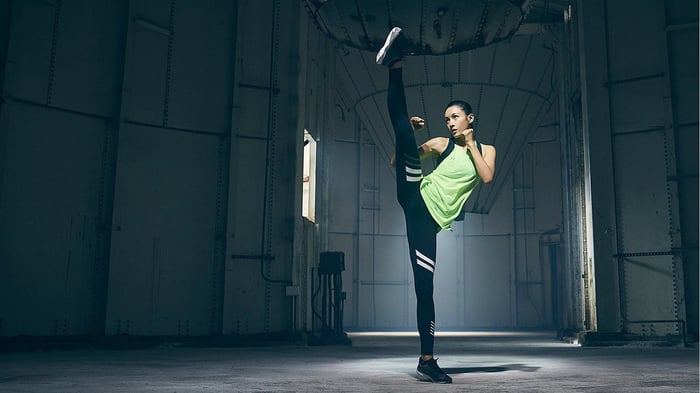 Under Armour generated 69% of its revenue from North America during the second quarter. That core unit's revenue fell 3% annually during the quarter, marking its fourth straight quarter of year-over-year declines.

Under Armour's North American business is struggling to compete against resurgent rivals like Nike (NYSE:NKE) and Adidas (OTC:ADDYY). Both rivals have deeper R&D and marketing pockets than UA, and both companies are capturing more teen shoppers.

To counter its ongoing slowdown in North America, Under Armour is aggressively expanding overseas. Its international revenue rose 17% annually during the second quarter, but that growth didn't mark an acceleration from previous quarters.

Furthermore, Under Armour expects its international revenue to only rise by a low-to-mid teen percentage for the full year, compared to 22% growth in 2018. Competition from Nike and Adidas, which are both expanding their brick-and-mortar stores and direct-to-consumer channels (DTC) globally, is likely curbing UA's international growth.

UA's fastest growing international market is the Asia Paciifc region, which generated 24% annual sales growth in the first half of the year. But that still marked a deceleration from the region's 28% growth in 2018, and isn't fully offsetting its tepid single-digit growth in its EMEA (Europe, Middle East, and Africa) and Latin America regions.

Under Armour's direct-to-consumer revenue (from its own stores, websites, and apps) rose 2% annually during the quarter and accounted for 35% of its total sales. That growth offset a 1% decline in its revenue from wholesale channels like third-party retailers and department stores.

Under Armour's DTC growth marked its best year-over-year performance in four quarters, but it compared poorly to its 7% growth a year earlier.

Under Armour previously highlighted new apparel products, especially for women, as catalysts for future growth. Its apparel revenue rose 5% in 2018 led by stronger sales of training apparel, and accounted for over two-thirds of its top line.

But that enthusiasm clearly waned this year, as the company's apparel revenue rose just 1% annually in the first quarter and declined 1% to $740 million in the second quarter. UA didn't offer a clear explanation for the decline, but it was likely caused by competition from other athleisure rivals like Nike, Adidas, and Lululemon -- the last of which regularly generates double-digit sales growth.

I've never been a fan of Under Armour. It's an underdog in a saturated market where its top rivals have deeper pockets, bigger celebrity backers, and arguably stronger brands. Furthermore, the stock trades at nearly 50 times forward earnings -- and that's assuming that it returns to profitability later this year. That's a lofty valuation for an underwhelming stock.