The Federal Reserve cut interest rates for the first time in a decade, but comments by Chairman Jay Powell had investors believing further cuts are unlikely, and major benchmarks sold off after the announcement. The Dow Jones Industrial Average (DJINDICES:^DJI) and the S&P 500 (SNPINDEX:^GSPC) opened higher and were close to even for most of the session, but plunged in the late afternoon. All the S&P sectors closed down. 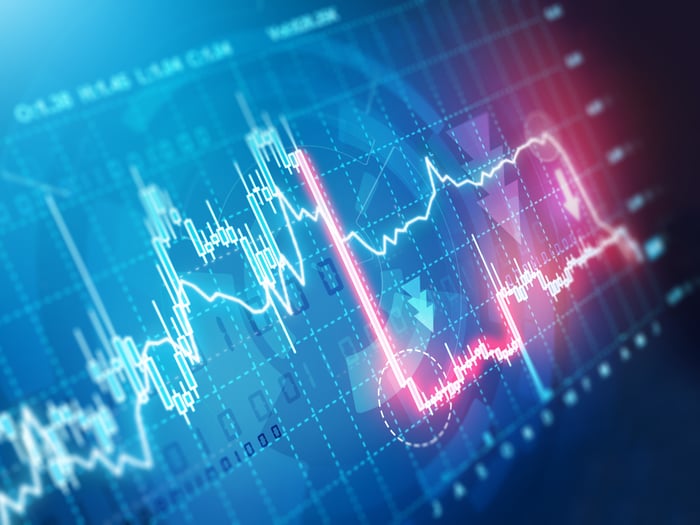 Shares of Apple rose 2% after the tech titan reported better-than-expected fiscal third-quarter results thanks to strong growth in wearables and services. Net sales grew 1% to $53.8 billion and earnings per share fell 6.8% to $2.18. Wall Street was expecting the company to earn $2.10 per share on sales of $53.4 billion.

As expected, iPhone sales slumped year over year, but the 12% decline to $26 billion was an improvement over last quarter's 17% drop, and Apple reported that iPhone sales in its retail and online stores returned to growth in June. Revenue excluding iPhone increased 17%, led by 48% growth in the unit that includes wearables, and 13% growth in services. Mac sales were up 11% and iPad jumped 8%.

Analysts on the conference call were also interested in Apple's surprising performance in mainland China, where the company returned to growth and posted record Q3 revenue despite currency headwinds.

Looking forward, Apple guided to fourth-quarter revenue between $61 billion and $64 billion, compared with the analyst consensus of $61 billion.

General Electric beat analysts' low expectations for the second quarter and raised guidance for cash generation for the full year, but shares slipped 0.7%. Revenue of $28.8 billion represented a decline of 1.1% but was a bit higher than the $28.7 billion Wall Street was expecting. As reported under generally accepted accounting principles (GAAP), GE's continuing operations lost $0.03 per share, but adjusted EPS was $0.17, better than the $0.12 analysts had predicted.

Revenue from the company's troubled power segment fell 25% year over year, but GE says the business is stabilizing. Segment profit of $117 million was an improvement over Q1's $80 million. GE credited improved execution and profitability in its power unit for a $1 billion increase in its forecast for full-year free cash flow, which it now expects to be between an outflow of $1 billion and an inflow of $1 billion.

Investors are watching that free cash flow number closely as the best indication that CEO Larry Culp's plan to turn around the company is taking hold, but with the stock already up 44% for the year, shareholders weren't ready to celebrate that news quite yet.