German automaker BMW (OTC:BMWYY) (OTC:BAMXF) said on Aug. 1 that its second-quarter operating profit fell 20% from a year ago, to 2.2 billion euros ($2.4 billion), as it boosted spending to prepare its factories to build electric vehicles alongside conventional models. 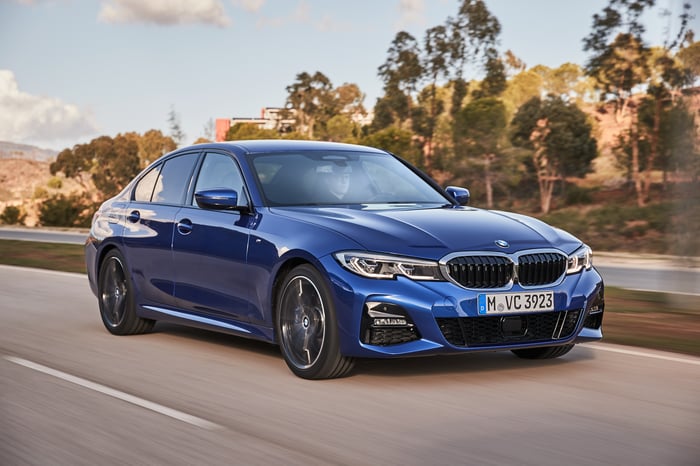 BMW began rolling out its all-new 3 Series sedan in the second quarter. Supplies of the new model were tight, but strong SUV sales offset the impact. Image source: BMW.

Why BMW's EBIT declined by 20%

Why did EBIT fall so much year over year? Increased spending, much of it related to the company's upcoming line of hybrid and battery-electric vehicles, accounted for much of the 538 million euro decline.

The remainder of the year-over-year decline in EBIT, about 130 million euros, is largely explained by higher raw material costs and exchange-rate swings, BMW said. Pricing pressures in some markets (particularly China) were also a factor.

What happened with BMW in the second quarter

Nicolas Peter is BMW's member of the board of management for finance, a title equivalent to chief financial officer of a U.S. company. Here's what he said about the outlook for BMW's automotive segment in the second half of 2019:

As long as conditions do not deteriorate significantly, we expect to remain within our announced guidance range for the full year. In the automotive segment, deliveries are forecast to increase slightly. More new models will be launched in the second half of the year. We expect the new 3 Series and the larger X models, in particular, to generate positive momentum.

Peter confirmed that BMW still expects its full-year automotive EBIT margin to come in between 4.5% and 6.5%, the range given when BMW revised its guidance after the first quarter.