Audio chip developer Cirrus Logic (NASDAQ:CRUS) reported its fiscal first-quarter results after the market closed on July 31. Revenue declined, but the company managed to grow adjusted earnings thanks to improvements in gross margin and operating expenses. Cirrus expects another revenue decline in the second quarter, but the company sees long-term growth opportunities outside of the smartphone market. 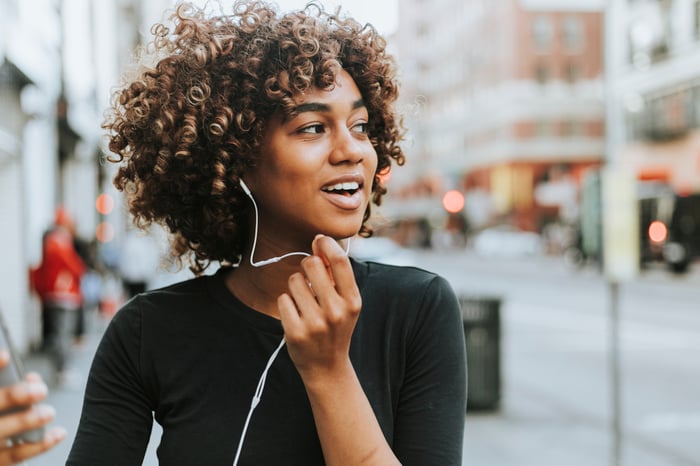 During the earnings call, Cirrus CEO Jason Rhode talked about lapping a negative development from last year: "So, I mean, the good news we're getting through the year-over-year comps, where we're kind of lapping [the] much-discussed dongle, inclusion or lack thereof. So that's from a year-over-year perspective, that's good."

Apple decided in 2018 to no longer include a free headphone dongle with each new iPhone. That dongle contains about $1 of Cirrus content, according to analyst estimates at the time, so this move had the effect of reducing Cirrus' sales. The company is now lapping that negative development, which should make year-over-year comparisons easier.

Rhode also discussed Huawei: "I think in the context of Huawei last quarter, as recently as last quarter we are talking about the long-term potential for them to be a 10% customer. We think that's potentially still the case."

For the second quarter, Cirrus provided the following guidance:

Cirrus is expecting another revenue decline in the second quarter, which is not surprising given the state of the smartphone market. IDC predicts global smartphone shipments will slump 1.9% this year, and Apple in particular is suffering from weak demand. While Apple no longer discloses unit iPhone sales, its iPhone revenue tumbled by nearly 12% year over year in its latest quarter.

In the long run, Cirrus believes its growth will be driven by products other than smartphones. From its first-quarter letter to shareholders: "Looking ahead, we believe we are positioned for future growth as the value placed on audio and voice continues to expand and demand for our low-power expertise in new mixed-signal domains beyond our traditional markets is increasing."