The idea behind Trupanion (NASDAQ:TRUP) is simple enough. Founder and CEO Darryl Rawlings wanted a way for pet owners to have guaranteed insurance with clear and affordable limits. By signing up lots of pets, installing software in vet offices, and using data analytics to determine the best possible prices, Trupanion could offer pet insurance to the masses.

That formula has worked out well, as the company's stock has tripled since going public in 2014. But recently, Trupanion has had to spend more -- much more -- to sign new pets up. That hasn't kept the company from growing, but it's a trend investors need to watch closely. 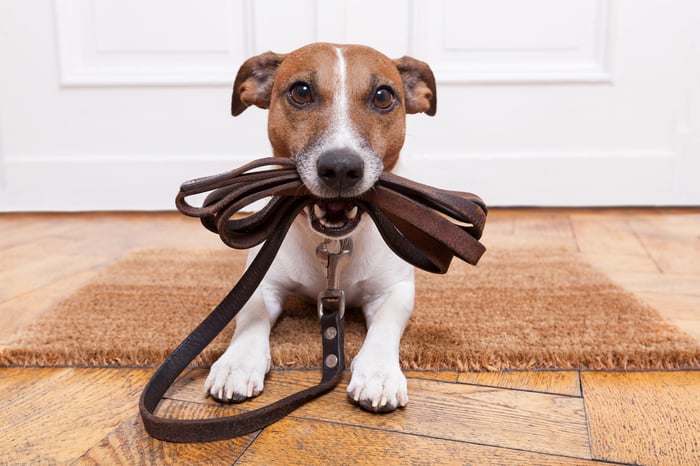 Before we get into the specifics of the earnings release, let's look at how Trupanion performed on the headline numbers.

It might raise eyebrows to see revenue growing so fast, but the company's losses expanding so much. On that front, there are three explanations: First, with the company approaching the break-even mark, any move (toward profitability or losses) is exaggerated by looking at percentages.

Second -- and more importantly -- Trupanion is expanding its sales and marketing spend dramatically. After backing out stock-based compensation, expenses in this division grew 52% during the quarter to $8.2 million. As the company highlighted on its conference call, this increase is split evenly between spend on leads (the head count of what it calls its "territory partners" and software installed onsite) and conversions (typically, call center investments that get pet owners to sign up).

Finally, the cost of revenue expanded slightly more than the revenue itself. The key culprit here was that expenses for reimbursing vets (in other words, paying out medical claims) grew 27% to $66 million -- slightly outpacing revenue growth.

This is the second quarter in a row where such expenses grew more than expected, but management reiterated that such claims can be lumpy and -- over the long run -- the percentage of "lucky" (those without health problems) and "unlucky" (those with health problems) pets will find their traditional equilibrium. That said, it will be important for investors to watch if this is the case. If claims continue to rise at a faster pace, it's a sign that the company's underwriting is creating a situation where there's more liability for the pets than expected.

Digging deeper into the company's performance

While the above numbers are helpful to get the picture from 30,000 feet, it's important that investors understand all the dynamics at play. Here are a look at several of the key moving pieces.

Of all the numbers above, the biggest one of note is the cost of pet acquisitions. Management already highlighted that it was increasing spend somewhat dramatically in this realm last quarter. Again, the spend is being split between creating leads and converting them. Speaking on the conference call, Rawlings stated:

These are hard, multiyear initiatives, and we expect to measure our success in years as opposed to quarters. ... We maintain a long-term perspective. We are building this company for the decades ahead, and we are making additional investments to deepen our competitive moats. ... I've said it before, but it's worth repeating. Execution is hard, and it comes down to people.

In other words, the increased spend won't become notable overnight. Those who invest with the company need to be patient for continual growth and retention improvements.

Here are a few more tidbits of note from the quarter:

For the rest of the year, management expects continued strong growth. The midpoints of revenue expectations for the third quarter and full year are $97.5 million and $379 million, respectively. If both targets are hit, they would represent 25% year-over-year growth.

But investors should keep an even closer eye on pet acquisition costs, retention rates, and the growth of payments to vets, as these could be the true harbingers of the company's fate over the long run.