The turnaround at Mattel (MAT 0.82%) continues to show promising results. In the most recent quarter, the company's top brands -- Barbie and Hot Wheels -- posted strong growth.

Also, while Mattel continues to report a loss on the bottom line, management is ahead of schedule in simplifying operations to cut down on operating costs. There could be light at the end of the tunnel, with the net loss rapidly narrowing toward breakeven.

Here are seven signs Mattel is headed in the right direction. 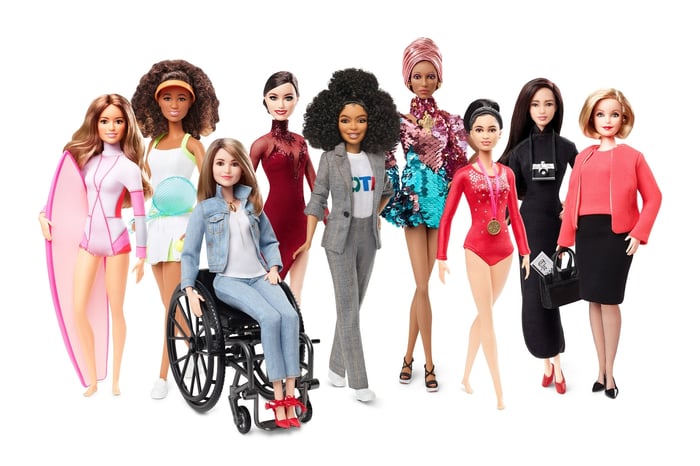 Barbie is a powerful franchise for Mattel. Image source: Mattel.

For Mattel to turn itself around and build investor confidence, it needs to prove that it can consistently grow sales. The company continues to see strong demand around the world for Barbie and Hot Wheels -- two of the hottest toy brands in 2018. Mattel reported another quarter of top-line growth, with sales up 2%, and 5% on a constant-currency basis year over year.

Some toy categories -- such as the infant, toddler, and pre-school category -- still need improvement, but management seems to have established a stronger flow of sales volume. The non-GAAP (adjusted) sales growth of 5% for the second quarter was much better than the 14% decline in the year-ago quarter.

What's more encouraging is the improvement in profitability. There is still a long way to go, but the gross margin was up an impressive 9.6 percentage points versus last year's second quarter. The reported operating loss of $51.4 million represented a gain of $137.8 million. It was the fourth consecutive quarter of year-over-year improvement in gross margin, operating loss, and earnings.

Mattel is cutting out the fat in a hurry. Management is ahead of schedule to cut $650 million of costs by the end of 2019. At the current pace, the company is on track to save $754 million of costs this year as part of a strategy to simplify operations.

3. Growth across all regions

Sales grew on a constant-currency basis across all regions. Europe, the Middle East, and Africa saw a 13% jump year over year, while Latin America and Asia Pacific increased sales by 7% and 2%, respectively. North America posted a 3% increase. All of these regions except Latin America reported a decline in sales in the year-ago quarter.

The best performing categories in recent quarters have been dolls, vehicles, action figures, building sets, and games. The dolls category grew 6% excluding currency, driven by a 13% increase in Barbie -- the seventh consecutive quarter of growth for the brand. The growth in dolls was held back by a decline in the American Girl franchise, which has been struggling.

Hot Wheels enjoyed its best second quarter in the company's history. Sales for the franchise were up 9% excluding currency, which drove sales for the vehicle category up 3% year over year. Management expects continued growth in both Barbie and Hot Wheels -- two of the company's most important brands.

5. Fisher-Price may turn the corner

Fisher-Price and Thomas & Friends are two of the company's power brands, but both have struggled lately. Sales for these franchises were down 4% in the second quarter, but management expects improvement in the second half of the year.

Fisher-Price saw a 4% decline in sales, which is a notable improvement over the 15% decline in Q2 2018. Mattel is launching several new products within the franchise later this year, including licensed products related to the popular movie franchises Toy Story and Frozen.

Thomas & Friends continues to struggle, but management is hopeful of building momentum for the franchise as the 75th anniversary for the brand approaches in 2020.

One of Mattel's key growth initiatives is to adapt its best franchises to the silver screen. There has been a lot of good news on this effort, including partnering with the biggest studios in Hollywood, like Warner Bros. and Sony Pictures. Mattel also signed on the Golden Globe winner Greta Gerwig and Noah Baumbach to write the screenplay for the upcoming Barbie movie.

Other Mattel films on the slate include ones based on the Hot Wheels and Magic 8 Ball franchises. Altogether, Mattel has six live-action films in development, which should give the turnaround effort some juice over the next few years.

One of the reasons to be confident in the turnaround story is that it is still one of the top toy companies in the world, and that allows it to partner with the biggest consumer brands to license toys.

Management maintained its prior outlook for full-year sales to be roughly flat, while currency will continue to be a headwind, causing a 1% to 3% negative impact to sales growth. They expect to save an additional $100 million in costs this year.

Analysts currently expect the company's adjusted EPS to come in at a loss of $0.44, which is a significant improvement over the 2018 loss of $1.14.

Overall, investors like where the company is headed, as the stock is up more than 10% at the time of this writing following the earnings report. The stock has fallen dramatically over the last year, but if Mattel continues to show improvement, shares could prove to be a bargain.