Please ensure Javascript is enabled for purposes of website accessibility
Log In Help Join The Motley Fool
Free Article Join Over 1 Million Premium Members And Get More In-Depth Stock Guidance and Research
By Jason Hall – Aug 4, 2019 at 8:16AM

I'd say that makes the "no MLPs in my retirement account" a pretty solid rule. Yet like most rules, there's an exception, in the form of Brookfield Infrastructure Partners (BIP -1.32%) and Brookfield Renewable Partners (BEP -1.46%). Not only do these two, according to Brookfield, "...generally qualify for IRA and 401(k) accounts," but the nature of their businesses and the potential for decades of growth make them perfect long-term investments to help people reach their retirement goals.

Let's take a closer look at why these two limited partnerships are not only OK for your retirement accounts, but what makes them exactly the kind of investments retirement investors should own. 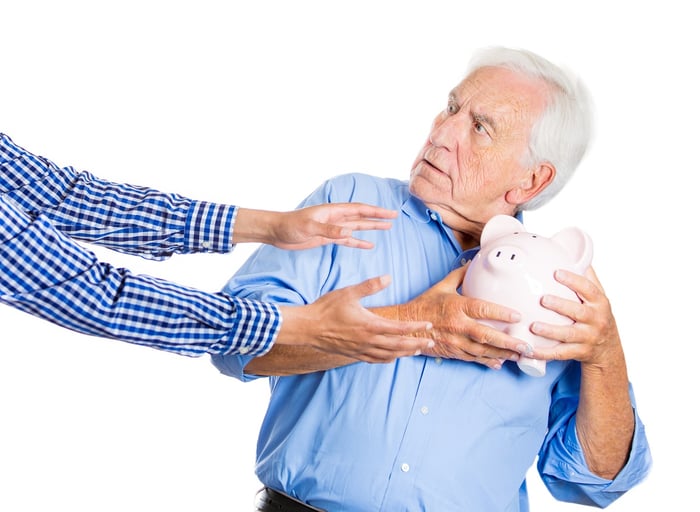 Easily the biggest benefit of retirement accounts is the tax savings. Once your money is inside an IRA or 401(k), you won't pay taxes on capital gains or dividends and distributions your investments pay. So long as you leave your assets inside the account, they will continue to grow completely tax-free. With a Roth IRA, the tax-free nature extends even into retirement, when you can take money out of the account and it doesn't count as taxable income.

There's a big catch with MLPs, called UBTI, which stands for unrelated business taxable income. The short version is that if UBTI -- which MLPs report each year in the Schedule K-1 they send investors -- exceeds $1,000, then you'll owe taxes. Moreover, that's not per MLP you own; it's the total from all MLPs you own in all your retirement accounts combined. To put it simply, that's added complexity come tax season, and as you age and your nest egg gets bigger, it's simply a problem easiest avoided by not owning MLPs in retirement accounts at all.

Brookfield Renewable and Brookfield Infrastructure, however, explicitly state that they have not generated UBTI in the past, and don't expect to do so in the future. The corporate structure of their businesses -- operations carried out by wholly owned subsidiary corporations -- doesn't generate UBTI. Other MLPs participate in joint ventures and other financing arrangements which generate substantial income classified as UBTI.

The $94 trillion reason to own Brookfield Infrastructure

That's a perfect storm of long-term opportunity for Brookfield Infrastructure to continue what has been an incredible first decade as a public company: 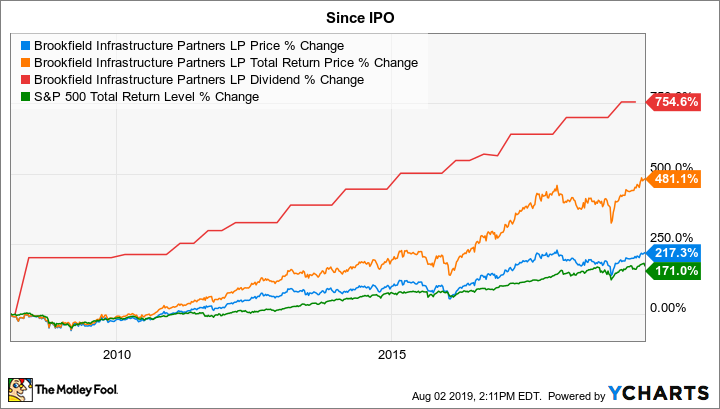 In short, there will be massive global opportunities to acquire and develop new water, energy, telecommunications, and transportation infrastructure assets in years ahead, and few management teams have shown the ability to effectively allocate capital as well as that Brookfield Infrastructure's. Its most-recent quarter, which included another double-digit increase in cash flows, is a reminder how well run this business is.

Brookfield Renewable and powering the future

The same massive demographic and population trend is set to drive Brookfield Renewable into the future, but it's also coupled with a global imperative to reduce humanity's reliance on fossil fuels.

In recent years, a larger and larger portion of global energy investments have shifted away from developing fossil fuels such as coal and oil, particularly for electricity generation, while more and more resources are being invested in deploying wind, solar, and other zero-carbon sources of energy. Moreover, the development of better, cheaper energy storage technologies is helping make wind and solar more dependable sources of energy.

This trend is set to accelerate as costs continue to improve, and more countries prioritize carbon reduction in their energy infrastructure.

Over most of its history, Brookfield Renewable focused on hydroelectric energy, and since going public in the U.S. in 2013 it's total returns have trailed the S&P 500: 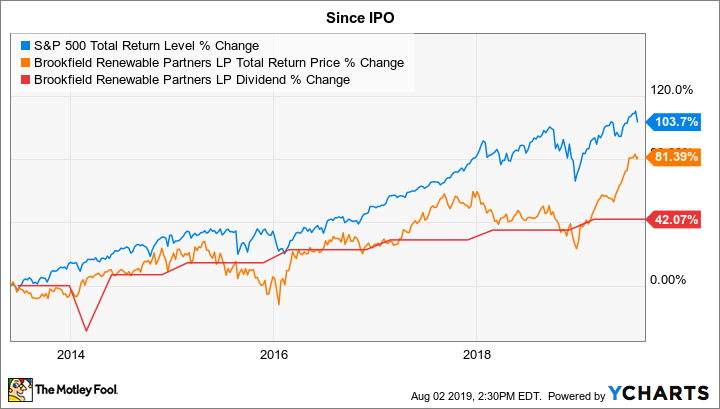 In recent years it has made solar and wind by far its biggest investment priority, as those technologies have made the transition from niche, subsidy-driven sources of energy with weak return profiles, to cash-cow assets that can beat fossil fuels on cost and emissions. Here's some context over how much its mix has changed. In 2016, 88% of its business was hydroelectric power, but by the first quarter of 2019, hydroelectric assets represented 56% of its power capacity, while wind and solar have grown from barely a double-digit portion to 44% of the mix.

Not coincidentally, since 2016 Brookfield Renewable has absolutely crushed the S&P 500 as an investment: 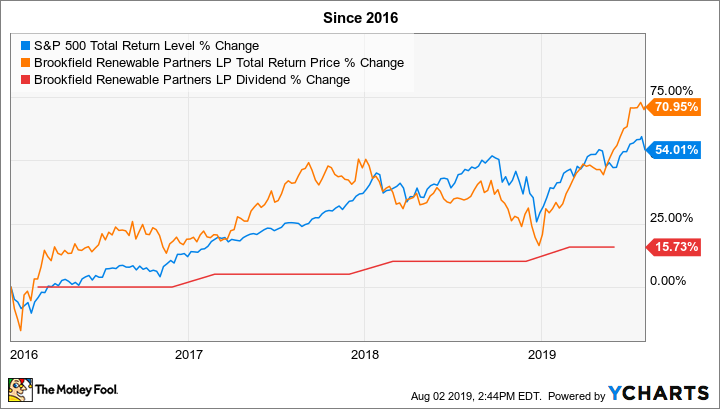 And I think investors can expect, over the long term, for Brookfield Renewable to continue delivering strong, market-beating returns.

Two ideal investments to build wealth for retirement, and income in retirement

Not only are both Brookfield Infrastructure and Renewable acceptable for your retirement accounts, but they're exactly the kinds of investments worth owning. Both have strong histories of dividend growth, a metric which correlates well with market-beating performance of the long term, particularly when you reinvest those dividends and supercharge your compounded returns.

Moreover, both should continue to prove excellent income stocks. At recent prices, Brookfield Infrastructure pays a 4.4% yield, while Brookfield Renewable yields 5.6%. Combine a high yield with the expected rate of future payout growth, and future dividends could be large enough for both to be "own forever" stocks.

Frankly few stocks are ideal investments for both retirees looking for income, and younger workers still building up their retirement wealth. And since they don't require the special tax treatment that makes most MLPs unsuitable for retirement accounts, investors of all stripes would do well to buy and hold them both for the long term.