Enterprise Products Partners (EPD 1.64%) continued its quarterly tradition of posting great results, identifying more investment opportunities, and increasing its payout to investors. In the second quarter, the company increased its distributable cash flow by 17% compared to the same time last year and shows no signs of letting up. Here's a brief look at Enterprise's results and what investors can expect for the rest of the year. 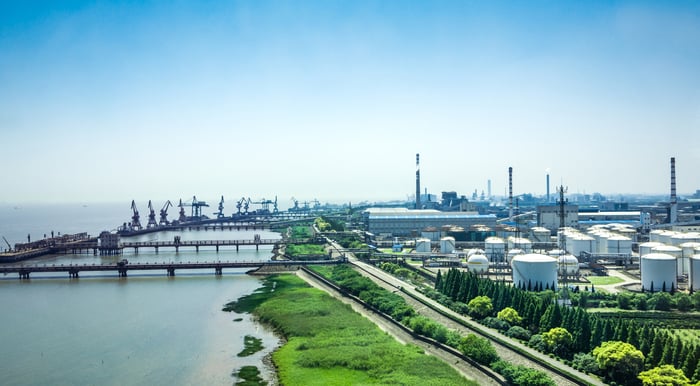 Enterprise has been investing so heavily in its business with new pipelines and processing facilities that it's becoming a quarterly tradition to set new operational records for product moving through its system. Adjusting for fair-value accounting standards for some commodity contracts, adjusted EBITDA for the second quarter was $2.1 billion. This result means that the company's leverage -- as measured by debt to EBITDA -- declined to 2.7 times. That's the lowest mark in more than a decade.

The company's distribution coverage also remained healthy with a coverage ratio of 1.8 times. That means it retained $753 million after distribution payments to reinvest in its ambitious growth plan. 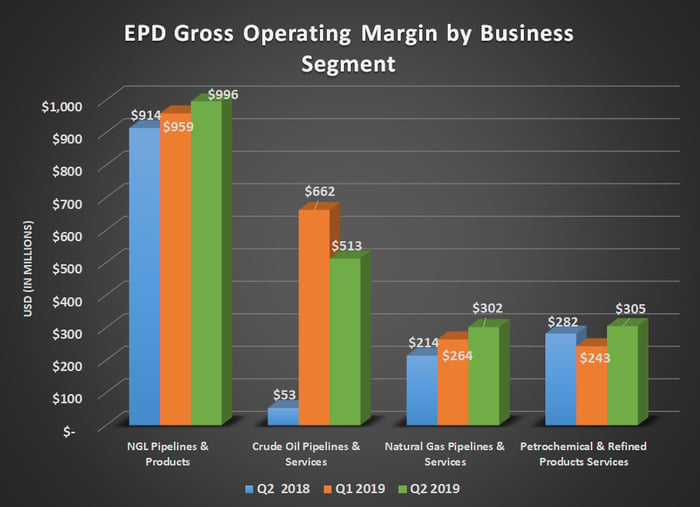 What happened with Enterprise Products this quarter?

Enterprise Products' success in recent quarters has been atypical for the midstream business lately -- see the Alerian MLP index chart below. With many others struggling and selling for modest valuations, one analyst asked on the company's conference call if Enterprise was on the prowl for an acquisition. According to CFO Randy Fowler, that isn't the case, because it sees better opportunities working on its own system.

We continually get shown "M&A opportunities" and where we keep coming back is our organic growth projects that bolt-on on to our existing system give us better returns on capital and you know and I dare say when we come in and look at some of the M&A opportunities that are provided, the capital intensity to drive DCF [distributable cash flow] per unit growth is much less with organic growth projects than it is with M&A opportunities. So that continues to be our focus, we will continue to come in and look at opportunities, but really we're more focused on the growth capex or just develop it organically.

You can read a full transcript of Enterprise Product Partners' conference call here. 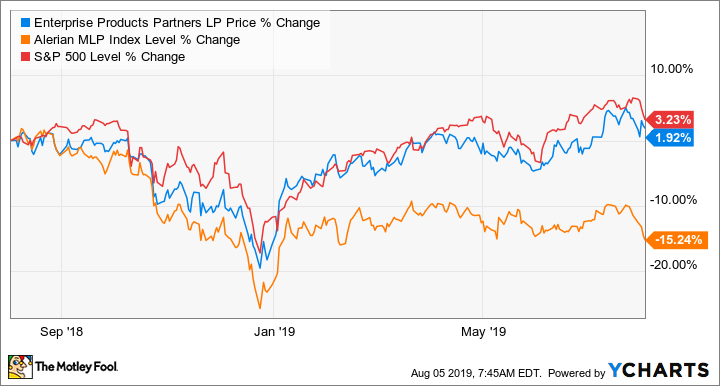 For all of the success Enterprise Products Partners has had over the past several years, the company still trades at a discount from where it was five years ago. Despite the disappointing share price performance, the business continues to get better and better, with a healthier balance sheet and increased growth opportunities. On top of that, Enterprise Products' distribution yields a healthy 5.9%, and its payout will likely keep growing for years to come.