Fitbit’s first-mover advantage in the wearables market fades as it loses its pricing power against a slew of rivals.

Fitbit's (FIT) stock recently hit an all-time low after the wearables maker posted its second-quarter earnings. Its revenue rose 5% annually to $314 million, beating expectations by about $2 million, and its adjusted net loss narrowed from $0.22 to $0.14 per share, also topping estimates by $0.04.

However, Fitbit cut the midpoint of its full-year revenue guidance by $95 million to $1.46 billion, marking a 4% decline from 2018. It also cut its full-year gross margin guidance from about 40% to 35%, citing lower demand for its Versa smartwatches, more product returns, higher insurance expenses, and bigger promotions.

To make matters worse, Fitbit's rival Apple (AAPL 0.20%) recently reported much stronger growth in wearables. Apple CEO Tim Cook stated that sales of its wearables surged "well over 50%" during the third quarter, accelerating from its growth of "near 50%" in the second quarter. Do those numbers indicate that Apple is eating Fitbit's lunch?

Fitbit slid to fifth place in the first quarter of 2019, with its share dipping to just 5.9%. Huawei and Samsung (OTC: SSNLF) claimed the third- and fourth-place spots, respectively. IDC noted that Fitbit maintained a "positive growth trajectory" with rising shipments, but that its average selling price (ASP) was tumbling.

Fitbit is losing its pricing power because it faces tough competition across all its price tiers. Xiaomi is dominating the low-end fitness tracker market with its Mi Band devices, and Apple leads the premium market for full-featured smartwatches. Other challengers, like Huawei and Samsung, are pursuing both markets with a wide range of devices. 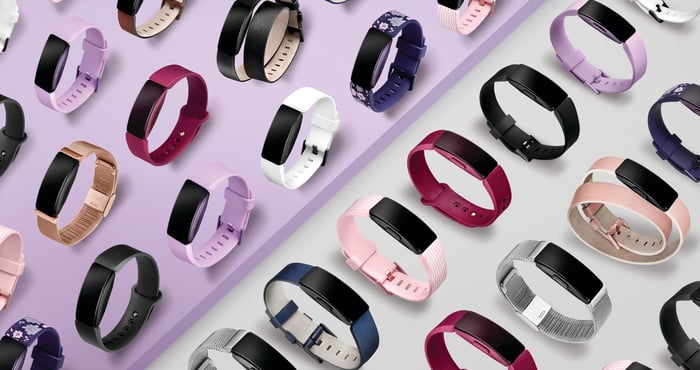 Fitbit's waning ASP indicates that it lacks pricing power, so its main strategy is to slash prices. However, Fitbit is also trying to narrow its losses by cutting its R&D and marketing expenses, which fell 19% and 18% year-over-year, respectively, last quarter.

Fitbit's other turnaround play is the expansion of its digital ecosystem with its App Gallery for smartwatches and Fitbit Health Solutions, which offers subscription-based health and workout tracking services. Fitbit didn't disclose how much revenue it generated from the App Gallery, but it stated that its Health Solutions revenue grew 16% annually and could generate about $100 million in revenue for the full year.

That accounts for 7% of Fitbit's full-year revenue forecast, but its guidance indicates that the unit won't meaningfully boost its sales or margins this year. Instead, Fitbit expects to sell cheaper products for the rest of the year -- which will lead it tumbling down a slippery slope of contracting margins.

Fitbit is likely losing a lot of high-end customers, particularly iPhone owners, to Apple. But the Versa also faces stiff competition from comparable devices from Huawei, Samsung, and Garmin, and it's still losing lower-end customers to rivals like Xiaomi.

Therefore, Apple is just part of the iceberg that's drifting toward Fitbit. Unless Fitbit alters its course with drastic measures (like ramping up its R&D and marketing spending to preserve its pricing power), it will likely collide with that iceberg and drown the remaining bulls.