Trash has been in the news lately, with segments focused on the amount of plastic waste generated by a growing global population, and where that waste ends up.

In North America, a lot of it ends up in trucks and landfills owned and operated by Waste Management (NYSE:WM), the continent's largest trash hauler and landfill operator. Waste Management is the top dog in the trash and recycling industry, adding more than 117,000 tons of trash to its 252 landfills in 2018. That leaves competitors like Republic Services (NYSE:RSG) in the dust.

So business is booming for Waste Management. But is the stock a buy? 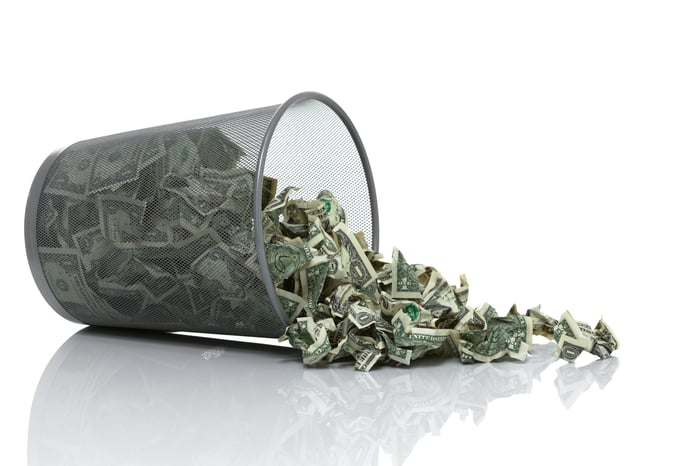 A record of outperformance

It has been an outperformer in many ways. The stock has been on a tear, handily beating the S&P 500 over the past five years. Shares have soared 158.7% during that time period, versus the S&P's 53.4% gain.

The company has also notched several consecutive quarters of good performance. Revenues are at all-time highs, at $15.3 billion on a trailing-12-month (TTM) basis. Free cash flow of $1.8 billion on a TTM basis is also at a record high. Net income has eased off a bit from its all-time high in 2018, but that's partly due to increased capital expenditures in the most recent quarter.

Still, the company is clearly firing on all cylinders, with improvement in everything from the volume of trash handled to adjusted EBITDA. But that doesn't necessarily make the company a buy.

Management isn't expecting the company's outperformance to end anytime soon. A growing population is only going to produce more trash, and weather-related disasters are also on the rise, which benefits Waste Management because trash disposal is an integral part of post-disaster cleanup.

Through the first six months of 2019, we are on track to achieve our full-year goals. In the second half of 2019, we expect that our collection and disposal business will continue to generate strong earnings and more than offset an anticipated decline in our recycling business from depressed commodity prices. Despite our updated expectation for a full-year recycling headwind of $0.01 to $0.02 per diluted share, we are reaffirming our full-year 2019 guidance of adjusted earnings per diluted share of $4.28 to $4.38, adjusted operating EBITDA of $4.40 billion to $4.45 billion, and free cash flow of $2.025 billion to $2.075 billion.

Even at the low end of Fish's projections, adjusted diluted EPS is scheduled to come in above 2018's $4.20. But that represents year-over-year growth of only 3.1%, when compared with 2018's $4.20 in adjusted diluted EPS. Similarly, the midpoint of the company's adjusted EBITDA is projected to exceed 2018's $4.22 billion by just 4.9%. So we're looking at mid- to low-single-digit growth.

That ordinarily wouldn't be a problem for a massive company in a mature industry. But it could be problematic for Waste Management investors.

The stock has been on a tear, which makes sense given the company's solid performance and good prospects. It also pays a small dividend, currently yielding about 1.7%, and benefits from a big competitive moat.

However, it's possible that Waste Management's past performance has been a little bit too good: The stock's climb has outpaced the company's earnings growth, to the point that its valuation metrics are looking a little high.

For example, the company's P/E -- a classic valuation metric -- currently sits at 28.4. That's higher than it's been in four years, except for a brief blip in early 2016. Its enterprise-value-to-EBITDA ratio is 14.6, the highest it's been in 10 years. That's partly due to the aforementioned capital expenditures, which weighed down earnings and EBITDA in the most recent quarter. But other common valuation metrics like price to book value and price to sales are likewise higher than they've been in a decade -- and on an upward trajectory. All of these metrics have skyrocketed just since 2019 began, surging between 25% and 45%.

This seems to be an industrywide trend: Many of Republic Services' metrics are also at or near 10-year highs. But it's hard to argue that Waste Management is anything close to a bargain at these valuations.

There's no question that Waste Management is a strong company. There's also no question that it's not the value it was even a year ago. The question is whether it's too overvalued to be considered a buy.

Honestly, that's a tough call to make. I wouldn't fault anyone for steering clear of the stock at this point, and there are certainly plenty of companies that look more attractive right now. I think that, on balance, Waste Management is still a buy, thanks to its strong fundamentals and competitive advantages. But if that P/E pushes above 30, I'd have to think long and hard before picking up shares.