Elon Musk wants to send humans to the moon, and eventually to Mars, aboard a gigantic "Starship" twice as big as the Apollo Moon Mission's Saturn V rocket.

But first he has to test it. That's where the Starhopper comes in. 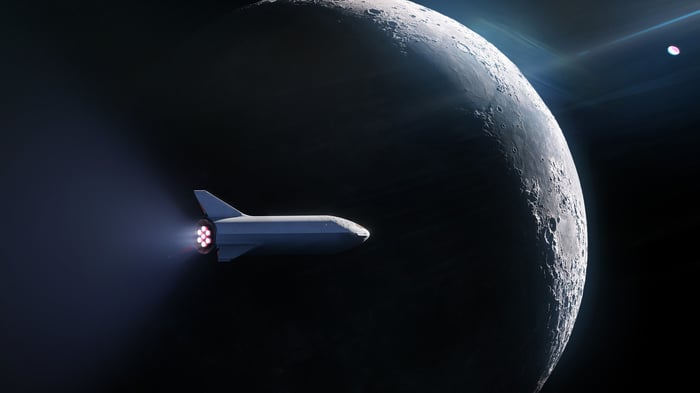 20 meters tall, built of shining, stainless steel, and perched atop just one single "Raptor" engine, the Starhopper is an abbreviated test version of the vessel that will one day evolve into the Starship. For months Musk has had teams building prototypes of the vessel at two not-so-secret locations in Cocoa, Florida and Boca Chica, Texas.

Last week, at long last, the Texas Starhopper conducted its first test flight -- and it was glorious.

Lifting from its launch pad and rising to a height of 20 meters before settling back down to land again in a billowing torrent of fire and dust, the Starhopper completed its first "untethered" (i.e. free-flying) test launch on the evening of Sunday, July 25. Amateur video of the event was almost blacked out by the contrast of bright fire glaring against a pitch black sky, but Musk was kind enough to post drone footage of the event on his Twitter feed, revealing the Starhopper as it poked its head ever so briefly above the cloud.

Adding to the excitement of the event was the run-up to the event. In the days preceding the test flight we saw multiple aborted attempts to get the Starhopper to launch, each ending in an apparent fireball of destruction (which later turned out to be dumped fuel that ignited and then was quickly extinguished). Unfazed by the faux-destruction, however, SpaceX engineers pushed through with their testing, and finally got the thing to work.

So what will SpaceX do for an encore?

20 meters is a good start, but in his next step Musk plans to raise the roof on Starhopper's target ten times, taking the spaceship to 200 meters altitude.

When will it happen? In a tweet following the "successful" first test, Musk promised an encore in "a week or two." And indeed, according to a recent announcement by the authorities in Cameron County, Texas, Boca Chica Beach is being closed for safety concerns (i.e. test flights are being planned for the rocket) on the evenings of Friday, August 9, and Monday, Tuesday, and Wednesday, August 12-14.

So things are clearly progressing quickly with Musk's Starhopper. In fact, they're progressing so fast that Musk says he hopes to finish the construction of a completed Star-ship prototype -- and test-fly it -- sometime in the next two to three months. Further test flights could take the spaceship into Earth orbit two to three months after that, meaning that it's conceivable we could see a Starship orbiting Earth before the end of this year.

What happens after that

Fast as all this seems to be coming, Elon Musk has plans to move even faster -- and farther. In an interview with CBS last month, Musk revealed that he is contemplating an independent, unmanned Starship mission to land on the moon "in less than two years," followed by a manned mission within "four years."

NASA, which is planning its own mission right now, believes there's only a "slim" chance Musk can pull this off. Regardless, in an interview with Business Insider last week, NASA CFO Jeff DeWit seemed to encourage Musk to try:

"If he can do it" -- that is, if SpaceX can land the Starship on the moon by 2021 -- "we'll partner with them, and we'll get there faster," said DeWitt. Furthermore: "I'd love to partner with him and get that done."

And while that might not amount to the kind of contract that would hold up in court, it does sound like the kind of assurance that Musk might take as a promise -- and a challenge for SpaceX to take up.

It also gets an investor thinking: What if SpaceX does get the Starship to work? What if Musk succeeds in landing the Starship on the moon in 2021, three years before NASA's 2024 deadline for its own moon landing, and a full seven years ahead of NASA's original schedule for Project Artemis?

If Musk can put a SpaceX rocket on the moon seven years before NASA thought it could get there -- and do it for a price vastly below the anticipated cost of Artemis -- I'd expect to hear a growing chorus in Congress calling for the cancellation of NASA's Space Launch System. With each SLS launch expected to cost at least $1 billion, NASA's homegrown moon rocket already looks more expensive than the prices hinted at for the Starship. (No official price has been released, but the space community as a whole seems to believe the cost could be as low as $200 million or less.)

When you think about how attractive it will be to speed up the Project Artemis schedule by several years, literal billions of dollars of NASA contracts for Lockheed, Boeing, Aerojet, and others suddenly look more precarious.

The prize is the moon, and it's Elon Musk's for the taking. All he needs to do is make the Starship work to claim it -- and he's already taken the first step.