The heating, ventilation and air conditioning (HVAC) industry has been one of the bright spots of the industrial sector in 2019, and Ingersoll-Rand (NYSE:TT) has been one of the standout performers, with its stock up 37% year to date. The recent results saw the company raise guidance for the second time this year. That said, is it enough to justify taking the stock higher?

There's little doubt that Ingersoll-Rand is one of the highest quality names in the sector. Its climate segment just reported another strong quarter while rivals Lennox International (NYSE:LII) and United Technologies's (NYSE:RTX) Carrier disappointed investors.

Lennox blamed cooler weather in the quarter for constraining sales in the residential market in the first half, and then promptly lowered its full-year outlook for the commercial HVAC end market in North America to flat, from low-single-digit growth. Consequently, Lennox cut its revenue and earnings forecast for 2019. 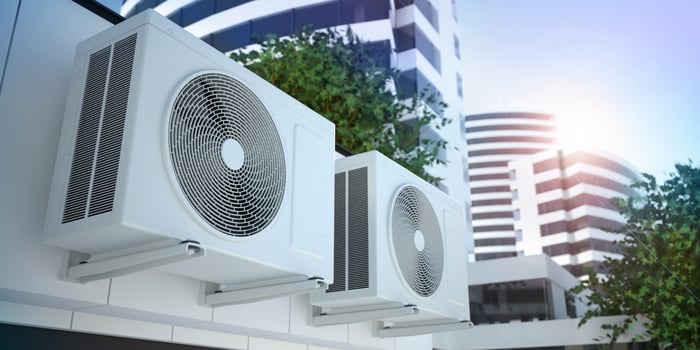 United Technologies also cut its revenue and earnings growth expectations for Carrier in 2019. Focusing on HVAC, management now expects global HVAC sales in 2019 to be up by low to mid single digits instead of a previous estimate of mid-single-digit growth. Partly as a consequence, the company's forecast for operating profit improvement at Carrier was cut by $100 million to a range of $25 million to $75 million, with CFO Akhil Johri saying he was "negatively surprised" by Europe in the HVAC business.

It was hardly the kind of industry backdrop that Ingersoll-Rand investors would have been relishing before their company reported earnings. But they needn't have worried too much because the company gave a relatively strong earnings report and outlook.

CEO Mike Lamach said commercial global HVAC was "continuing to be very strong," particularly in North America and Europe. He said the "residential HVAC business had strong, mid-single-digit growth in the second quarter, and we expect this business to continue to deliver strong performance for the full year."

To understand the anomaly between Ingersoll-Rand's report and those of its peers, J.P. Morgan analyst Steve Tusa suggested during the I-R earnings call that the company might be grabbing market share. Lamach replied: "Absolutely. That's a fact. Yes."

When asked why this may be the case, Lamach put it down to "having the most energy-efficient commercial systems."

Whatever Ingersoll-Rand is doing, it's working, and the company's performance continues to contrast favorably with Carrier. Ingersoll-Rand has long been the pick of the HVAC sector, and the latest presentation suggests it remains ahead of the field.

The chart below shows the evolution of the company's climate segment over the last few years. If you are wondering why climate bookings growth has been negative for the last two quarters, it is because significant declines in bookings from transport refrigeration came up against extremely strong bookings growth in 2018.

However, CFO Susan Carter said, "When excluding our transport business with some outsized order growth in 2018, organic bookings were up approximately mid-single digits for both the enterprise and our climate segment."

Moreover, Lamach pointed out that the transport refrigeration backlog was still more than double historical levels, and he felt confident about prospects for 2020. 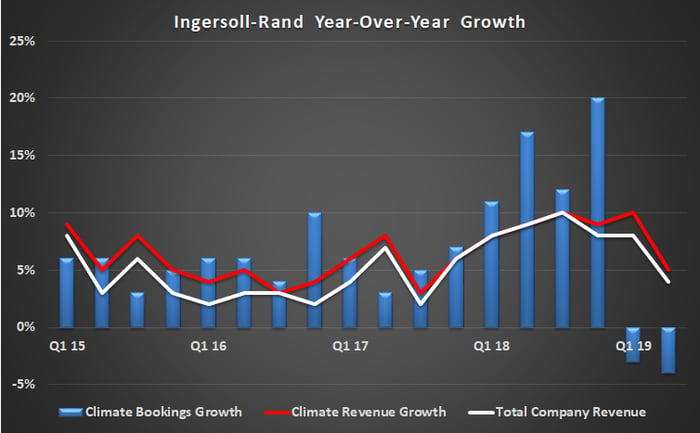 As such, management continues to expect full-year 2019 organic revenue growth of 5% to 6%, and adjusted EPS guidance was increased to $6.40 from $6.35 previously. Free cash flow is expected to be equal or greater than net earnings in 2019, and analysts are expecting mid-single-digit sales growth in 2020 and EPS growing 11% to $7.11.

Is Ingersoll-Rand a good value?

All of which puts the company on a forward P/E of 19.2 times estimated 2019 earnings, and 17.3 times 2020 estimated earnings. The stock still looks like a good value, but not by that much. As one of the high-quality names in the sector, it's definitely worth looking at on any sentiment-led weakness. But investors looking for shoot-out-the-lights outperformance may want to look elsewhere.