Please ensure Javascript is enabled for purposes of website accessibility
Log In Help Join The Motley Fool
Free Article Join Over 1 Million Premium Members And Get More In-Depth Stock Guidance and Research
By Keith Speights – Aug 6, 2019 at 6:00AM

The big story for Acceleron: waiting on good news for luspatercept.

Acceleron Pharma (XLRN) hasn't generated much excitement for investors so far this year. The stock is down close to 5% year to date while the broader market indexes are up solidly.

The biotech reported its second-quarter financial results after the market closed on Monday. Was there anything for investors to get excited about? Here's what you need to know about the Acceleron's Q2 update. 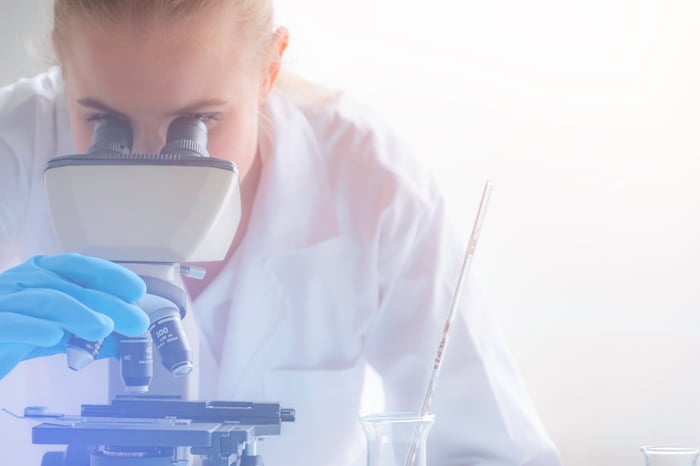 Acceleron reported that its revenue for the second quarter increased by nearly 649% year-over-year to $27.7 million. Wall Street analysts expected revenue to come in at $26.14 million.

Acceleron ended the second quarter with cash, cash equivalents, and short-term investments of $500.9 million. This was an increase from the $291.3 million on hand as of the end of 2018.

Were any of these financial figures particularly exciting for investors? Nope. The best news for Acceleron was that it's in good shape from a cash standpoint, but that wasn't unexpected -- especially after the company received a $25 million milestone payment from Celgene related to luspatercept.

This milestone payment made a big difference in Acceleron's year-over-year bottom-line improvement as well. Without it, the company's net loss would have been much worse in Q2 since Acceleron's operating expenses increased significantly.

By far the most important news for Acceleron in the second quarter was its pipeline progress. The U.S. Food and Drug Administration (FDA) accepted the Biologics License Application (BLA) for luspatercept in treating MDS-associated anemia and beta-thalassemia-associated anemia. The European Medicines Agency (EMA) also validated the Marketing Authorization Applications (MAAs) for luspatercept in these indications.

Acceleron Pharma CEO Habib Dable stated that the company is now "one step closer to the first-ever potential approval of an Acceleron-discovered medicine" thanks to the FDA and EMA review processes under way for luspatercept. He's right. And the outcomes of these regulatory decisions are the main things for investors to watch with Acceleron in the coming months.