Rival energy drinks took a bite out of the beverage giant's sales and earnings.

For nearly two decades, Monster Beverage (MNST 2.80%) has been a pioneer in the energy drink category. Stemming from its origins as a maker of natural soda products, Monster saw early on that consumers' tastes could shift away from traditional favorites toward new categories. Between it and arch-rival Red Bull, Monster was able not just to create a new category but to take an impressive share of the new market for years. Yet Monster's success has finally encouraged others to try to break into the energy drink market, and that could pose a new threat to Monster's long-term domination of the industry.

Coming into Wednesday's second-quarter financial report, Monster Beverage investors wanted to see continued strong gains in revenue and earnings. Monster's numbers weren't quite as good as most had hoped, and that has some questioning whether competition is actually having more of an impact on the energy drink giant's results than previously thought.

Monster Beverage's second-quarter results were solid but relatively unimpressive. Revenue rose 8.7% to $1.10 billion, lagging behind the 11% growth rate that most of those following the stock had wanted to see. Net income of $292.5 million was up 8.3% from year-ago levels, and that produced earnings of $0.53 per share. That figure fell short of the consensus earnings forecast among investors of $0.56 per share. 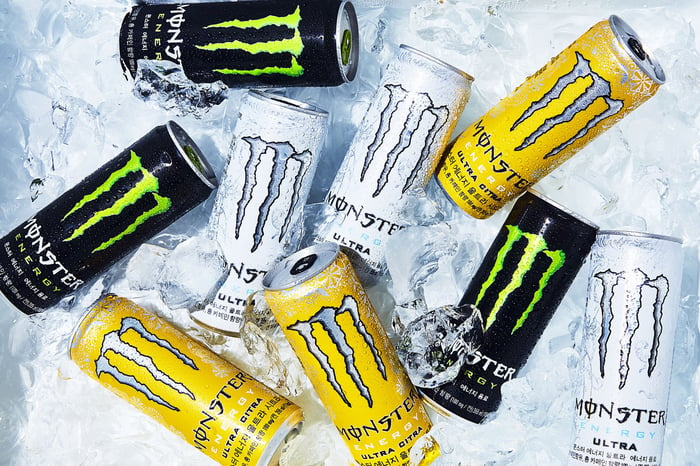 The usual dynamics among Monster's main segments reasserted themselves during the quarter. The Monster Energy drink division, which includes all of the company's legacy beverages, saw a nearly 10% rise in sales. That would've been even larger had it not been for the strong U.S. dollar, which took away about two percentage points of additional top-line growth. Solid performance from Monster Energy branded beverages and Reign Total Body Fuel contributed to the segment's results.

By contrast, Monster's other segments didn't match up to the energy segment's standards. The strategic brands division, which includes energy drinks that were acquired as part of Monster's partnership with Coca-Cola (KO 0.72%), saw revenue fall 0.8% from year-ago levels. Here, too, currency effects had a negative impact, but it's clear that Monster hasn't been emphasizing growth in these brands to a particularly large extent. Elsewhere, the third-party products segment remained insignificant, although its sales dropped more than 10% compared to last year's second quarter.

Can Monster Beverage keep up its energy?

CEO Rodney Sacks seemed happy with the report. "We are pleased to report record gross and net sales in the 2019 second quarter," Sacks noted, "driven by our Reign Total Body Fuel high performance energy drinks, which we launched in the first quarter." The CEO also attributed gains in the legacy Monster Energy brand for the company's overall success.

Looking ahead, Monster still sees plenty of room for growth. New Monster Energy brand drinks will get introduced in the U.S. and elsewhere, and the more affordable Predator line should see greater availability worldwide in the near future. That'll be especially important as other companies start to come into the energy drink arena. Coca-Cola, for instance, recently announced its plans to launch an energy drink of its own under the Coca-Cola brand -- a move that took many by surprise given the two companies' partnership.

With the stock having climbed recently toward its best levels in years, however, Monster pulled back on its stock repurchase activity. Monster reported no buybacks during the period, leaving it still with about $520 million in authorized repurchases if it decides to start doing so again.

Monster Beverage shareholders didn't like the news, initially sending the stock down more than 10% before recovering to about a 4% decline in the first hour of after-hours trading following the announcement. As Coca-Cola and other competitors start to make their mark in energy drinks, it'll be vital for Monster to defend its turf and keep moving forward with innovative new products.