The enhanced oil-recovery specialist did make some incremental progress on its strategic plan.

Denbury Resources (DNR) has been trying to get out from under a massive pile of debt, which has hampered its ability to grow. That was evident during the second quarter as the company -- which uses carbon dioxide to coax more oil out of legacy fields -- once again posted uninspiring results.

Delving into the results

On the one hand, Denbury delivered solid results for the quarter. Its production rose 1% compared to the first quarter, which was a bit better than it anticipated. That's due to the strong production response of the fifth phase of expansion at the Bell Creek Field. Output at Bell Creek jumped 28% from the first quarter and was nearly 50% above the year-ago level.

Meanwhile, the company's adjusted earnings beat the consensus estimate by $0.03 per share. That's the result of its better-than-expected production as well as its ability to drive down costs. The company reduced its lease operating and general and administrative expenses by $9 million compared to the first quarter.

However, despite those positives, the company's production still declined by about 4% year over year, while its adjusted earnings flattened out. That's due to both asset sales and the company's continued underinvestment in its business.

Denbury has been keeping a lid on capital spending so that it can generate free cash. It continued that trend during the second quarter. Overall, it produced $149 million in cash flow from operations. After capital expenses and other capitalized interest costs, the company generated $38 million in free cash flow. That gave it a bit more money to chip away at its debt.

The company further bolstered its balance sheet by selling $38 million of land in the Houston area and the Citronelle Field for $10 million. Denbury used that cash to reduce the principal balance on its debt by $120 million. It also completed a debt exchange with some creditors during the quarter, which extended the maturities on another $348 million of debt to 2024, which buys it more time. 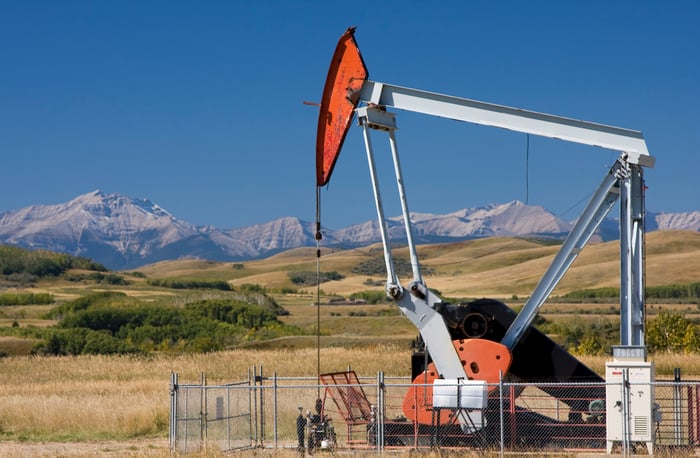 Denbury revised its full-year production guidance range as a result of the sale of the Citronelle Field and its better-than-expected results through the first half. The company now anticipates that its production will be between 57,000 to 59,500 BOE/D. At the midpoint, that's a 250-BOE/D increase from its prior view even though the sale of Citronelle will reduce output by 400 BOE/D. Meanwhile, the company plans to keep its capital budget range at $270 million to $300 million.

Overall, Denbury expects to produce slightly more oil for the same amount of money. Meanwhile, its overall profitability should improve, since Citronelle was one of its highest-cost fields.

The company currently expects that it will generate between $120 million and $150 million in free cash flow this year, assuming oil averages $55 a barrel. While crude is currently below that level, it has bounced around quite a bit this year.

The more cash it produces, the faster it will be able to chip away at its debt level, which stood at $2.48 billion at the end of the quarter. That's down about $50 million from the end of last year. The company's efforts to improve its balance sheet have helped push its leverage down from 4.5 times at the end of last year's second quarter to 4.1 times by the end of June. While that's an improvement, it's still well above the sub-2.0-times comfort zone of most oil companies.

Denbury is gradually making progress on its strategic plan to improve its balance sheet. The concern remains whether it can chip away at enough debt to stay afloat, especially since it has a substantial portion that matures in the 2021 to 2022 time frame. Given the overhang of that deadline and its slow progress so far, the company will eventually need to quicken the pace of its strategic plan so that it doesn't run out of time.