The company's liquid blood tests are catching on quickly as a way to diagnose advanced-stage cancer. Revenue grew 178% in the second quarter, but its plans for the future are even bigger.

On a mission to conquer cancer with data, Guardant Health (GH 1.19%) is changing the way oncologists make diagnoses.

The company's "blood-first" paradigm uses a small sample of a patient's blood to detect the presence of circulating tumor DNA, or fragments of a cancerous tumor's DNA moving through the bloodstream. This approach is much simpler than traditional biopsies, which take a tissue specimen directly from the cancerous tumor and often cause unwanted side effects. The results of Guardant's liquid biopsies are also ready much faster, an asset in a field where time is of the essence.

The company is still very small, but its innovative approach is quickly winning market share in the $100 billion oncology market. Let's take a closer look at its progress, as reported in its second-quarter results. 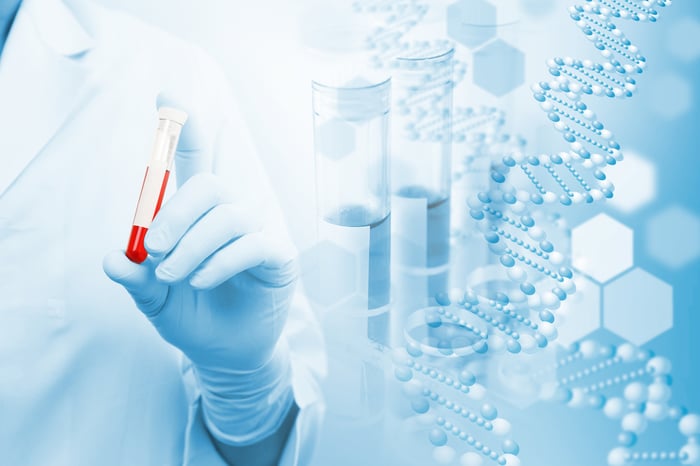 Data source: Guardant Health; Earnings per share are on a fully diluted basis.

What happened with Guardant Health this quarter?

The company's Guardant360 and GuardantOMNI diagnostic tests are rapidly gaining market adoption, which is causing the top line to grow rapidly.

The increasing usage of the tests is also helping Guardant's profitability and financial strength.

During the quarter, the Guardant team made significant progress across multiple areas of our business in support of our mission to expand unprecedented access to cancer's molecular information throughout all stages of the disease. We are especially encouraged by the strong adoption of Guardant360 and GuardantOMNI which we are seeing, even in the early phases of shifting the market to a blood-first paradigm for genomic testing.

The early success of Guardant's tests in advanced-stage cancer is encouraging, but it appears to still have plenty of room to grow.

At its current run rate, Guardant360 could reach 50,000 patients this year, which would represent approximately 7% of the 700,000 advanced-stage cancer diagnostics run annually in the U.S. There are also more than 1,000 ongoing U.S. Food and Drug Administration trials of new personalized cancer drugs, which collectively will call for the enrollment of 100,000 patients, according to the company.

But the company has even more ambitious goals. Guardant is looking to improve its tests so that they're able to detect early-stage cancer, before an individual is showing symptoms. With the costs of genomic sequencing falling so dramatically, cancer screening could become part of an elderly or higher-risk patient's annual checkup.

The company is already on track to release a diagnostic to detect early-stage colorectal cancer, which could accompany a prospective clinical trial by the end of this year.