Add these three stocks with proven success to your portfolio for steady income over the long term.

Not all companies on the S&P 500 are capable of raising their dividends every year. And it takes a special one to raise it for 25 years straight, every year.

In uncertain times, it can be difficult to determine which stocks you should hold on to through blue skies and stormy weather. Very few have demonstrated routine performance through booms, busts, recessions, inflation, interest rate hikes, and everything in between. Which is exactly why all smart investors should have at least a few Dividend Aristocrats in their portfolios. There aren't many of them, but as you watch other investors panic, you can rest easy on the sidelines knowing your money is safely growing with three of these solid bets. 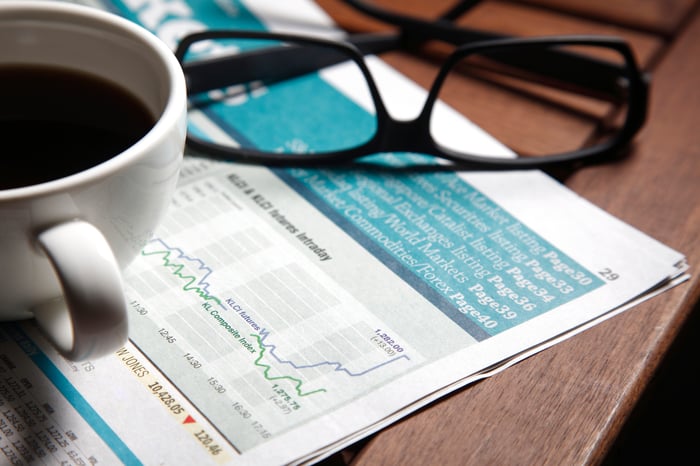 1.) Walmart: Not your average retailer

Walmart hasn't just miraculously survived the so-called "retail apocalypse," it's thrived in it. The 57-year-old company has seen its fair share of changing market trends, and when things started to heat up from competition like Amazon.com, it quickly pivoted to beef up its online presence.

Its latest endeavor is building out its online grocery service, no doubt a play to keep up with Amazon's rapid seamless integration with Whole Foods. CEO Doug McMillon is confident Walmart can keep up in this sphere -- and even eventually dominate -- due to its wide reach. Speaking to a Fortune magazine conference, McMillon told investors, "When you have a store environment and you have fresh or perishable food so close to people, those stores then become dual store and pick centers."

He's not far off. Walmart's $170 billion food business easily makes it the United States' biggest grocer, and the company aims to offer grocery pickup in 3,100 stores by the end of 2019, with the coveted same-day delivery at 1,600 stores by the same time. It's no surprise Walmart is making this pivot.

But it doesn't stop with groceries. The company is focused on growing all of its e-commerce capacity at a breakneck pace. In 2019, its online channel grew by 37% in the first quarter, compared with Amazon's 10%. But it hasn't forgotten about its brick-and-mortar side, with comparable-stores sales growth of 3.4% in the same period. The bottom line here is that Walmart's not going anywhere. Its aggressive acquisitions suggest the company isn't afraid to elbow back as the online space gets increasingly crowded -- and it can do it while growing its retail presence.

As of now, it offers a 2.1% dividend. It may not sound like much, but investors should rest easy knowing Walmart is reinvesting a lot of its excess capital into the company to continue to grow, since there's still room to do so. For a business that's been around as long as Walmart has, that should be music to smart investors' ears.

Coca-Cola's mammoth success is something of a miracle, at least at face value. But it's really due to a series of strategic management decisions and controlled growth over the long term. As with any company, Coca-Cola deals with routine headwinds, specifically a declining consumer taste for sugary soft drinks (particularly in the West). Soda sales are at a 30-year low, and as health and dietary awareness spreads, the downturn is only likely to accelerate.

Plenty of optimistic investors see the company surviving -- even thriving -- in a less hospitable market for sodas. Its brand portfolio is diversified enough to survive a declining interest in sugary drinks. The company owns a wide variety of other beverage offerings, including Fairlife milk, Gold Peak tea, Glaceau Smartwater, Glaceau Vitaminwater, and ZICO coconut water. It has also focused on reviving some of its less diet-conscious products by offering less-sweet, naturally sweetened, or diet versions of its higher calorie fan favorites.

Bulls argue that Coca-Cola has plenty more tailwinds than headwinds. The company saw case volume growth in every region except for Latin America, which posted flat returns last year, and it's wrapping up a nearly decadelong refranchising project that is expected to "deliver value to customers with scale across supply chain, information technology and customer support through independent, local companies that know their communities and customers best," according to a company press release.

And when it comes to dividends, Coca-Cola is one of the best. It has raised its payout annually for over five decades now. It currently yields just over 3% -- and is likely to grow even more in the coming years. Analysts expect around 5% earnings growth over the next five years, and since it only has a bit over 20% of cold-beverage market share in First World countries, there's plenty of room for expansion.

Up there with Coca-Cola, Johnson & Johnson has consistently raised its dividend for 57 years and is one of only two companies in the small collection of Dividend Aristocrats that has a AAA credit rating. Not too shabby.

While you may think of Johnson & Johnson as being at the forefront of medical advances and pharmaceuticals, most of its revenue comes from the stuff that's readily available on shelves. Think: baby powder, beauty supplies, and bandages. The company has been adding a wide array of brands to its portfolio over the decades, including Aveeno, Band-Aid, Tylenol, Listerine, and Splenda. With this diversification, if one aspect of J&J's business lags, the company can continue to accelerate.

One of its top-selling drugs, Remicade, an immunosuppressant for patients with Crohn's disease or arthritis, lost its patent last year and is now feeling the heat from cheaper competitors. But despite the drug's less-than-cheery outlook, J&J's pharmaceutical division actually managed to grow by nearly 8% year over year.

For a highly diversified, proven company that offers a 2.7% dividend yield, look no further than Johnson & Johnson.