The decision to leave the E.U. by the U.K. in 2016 was initially a nightmare for U.S. freight forwarders and logistics companies. Those in the supply chain ecosystem suddenly confronted huge business risk based on the uncertainty of trade negotiation outcomes. The panic was palpable and, in New York, shares of XPO Logistics dropped 14.9%, FedEx fell 3.8%, and United Parcel Service declined 2.2 % the day after the Brexit vote.

Logistics companies set aside resources to develop contingency plans against the unknown to manage their risk exposure. Andy Clarke, former chief financial officer at Minneapolis-based C.H. Robinson Worldwide (CHRW -0.75%), stated that the company was reviewing its growth plans in Europe in the wake of Brexit, "I would expect you would see a pause in companies doing acquisitions in Europe and the U.K. during this period," he said. But things were to get worse with the prospect of a hard Brexit. 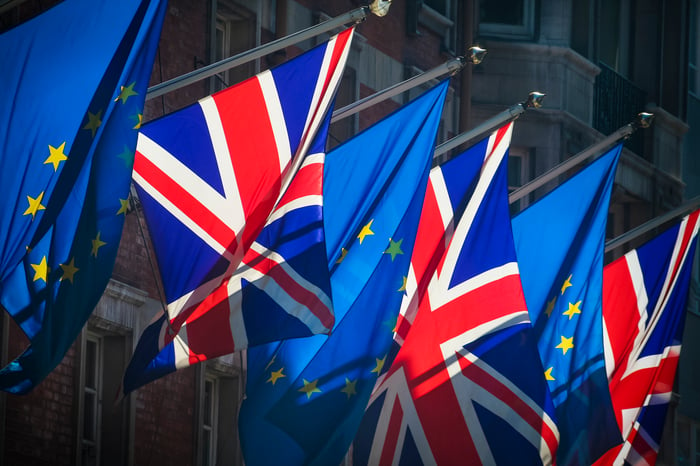 The latest reveal in the game called Brexit

Fast forward to August 2019, and a hard Brexit is looming. This bodes exponentially more chaos for global shippers, except for one thing. Boris Johnson is now the Prime Minister, not Theresa May, and Johnson's favorable opinion of the President of the United States is paving the way for a free-trade deal with the U.K.

If a hard Brexit occurs, and Britain signs a trade agreement , U.S. companies might find it easier to access ports than E.U. vessels; U.S. shippers will have easier access to the U.K. market with little change in transit times .

After Brexit, the U.K. must renegotiate its trade relationship with the E.U, with accounts for 50% of all its imports and exports. Currently, goods are traded freely with no import taxes and duties and there are few customs or port delays because documentation is harmonized. Once Brexit occurs, the free flow of goods will cease. The current customs documentation and inspection systems will no longer be effective, and creating new ones will be a massive undertaking, requiring substantial investment. Imports from E.U. countries will be more expensive due to the need for import licenses and customs clearance payments.

If the U.S. establishes a free-trade agreement with the U.K., it will be able to provide cheaper goods to the U.K. market with faster transit times and fewer delays. The U.K., in return, would also have easier and tariff-free access to the U.S. markets.

Just how well then is C.H. Robinson positioned to leverage Brexit and a potential trade deal?

First, there's been quite a shake-up at the helm of the Minnesota-based company. CEO John Wiehoff stepped down in May and was succeeded by Robert Biesterfeld, who was previously chief operating officer. The company also has a new chief technology officer, and an interim chief financial officer . The changes were explained as part of the company's long-planned succession process, however, the company had been experiencing increasing operating expenses, an increase of 12.6%, due to a higher than average headcount.

This line-up reflects Biesterfeld's vision of being at the forefront of digital transformation for logistics with optimal application of machine learning and AI technology. The company also seems to be focusing on Europe. In April 2019, the company announced that it would hire over 100 IT professionals in Warsaw, Poland, by the end of 2020 to support customers and carriers across Europe and other global markets . While expanding headcount is not what investors might like to see, it supports the company's vision of becoming a logistics technology leader. The IT workers will support the company's Navishphere, an app-based multi-modal transportation management system and a source of competitive advantage.

When global politics, trade wars with China, and potential trade deals with the U.K. are making operations anything but certain, investing in technology that can facilitate nimble and smart business decisions is not a bad way to go. Nor is buying up competitors that might get in your way.

The logistics leader announced the acquisition of Madrid-based freight forwarder, The Space Cargo Group, for $48 million, serendipitously, or not, preparing the company for increasing activity in the euro region. For an undisclosed amount, the company also acquired Dema Service, an Italian freight company.

The financials are rosy too. In May, C.H. Robinson's quarterly dividend was consistent with expectations at 0.50 per share despite the company's recent investments and acquisitions -- a sign that the company is handling its expenditures and preparing sensibly for the future . The dividend yield, at 2.32%, is twice that of its competitors including J. B. Hunt.

C.H. Robinson reduced its debt in 2019 to $1.3 billion from $1.4 billion in 2018 and has cash and short-term investments of $379 million allocated for reinvestment into the business. The company generated cash from operations of $793 million over the same time period giving an operating cash to total debt ratio of almost 60%; the company can comfortably cover its debt.

Things get a bit more interesting where debt to equity is concerned, which is relatively high at 84%, but clearly the market leadership of C.H. Robinson is sustainable, and the company is easily covering operational expenses. C. H. Robinson's earnings before interest and taxes (EBIT), a figure that reflects a  company's core operations excluding the effect of capital, is three times its net interest expense. This implies that the company is effectively using its debt to ensure growth at a time when opportunities, or lucrative trade deals, abound.

So, while Brexit was initially a risk manager's worst nightmare, it has now potentially been transformed into a dream come true; a beautifully packaged trade deal ready to be hand-delivered by President Trump to the new occupant at 10 Downing Street. What a thoughtful house-warming gift.