The U.S. Army is looking for a few good drones.

As recently as a few months ago it looked like it had found the drones it was looking for, settling upon privately held Martin UAV and publicly traded Textron (NYSE:TXT) to provide "scout drones" for it to test as potential replacements for the RQ-7 Shadow drones (also built by Textron, incidentally) that it has been using up till now. In March, Martin and Textron were the only two companies (out of 11 competing) to win $99.5 million contracts to supply units to be tested as part of the Army's Future Tactical Unmanned Aerial System (FTUAS) competition.

Now that competition has been blown wide open. 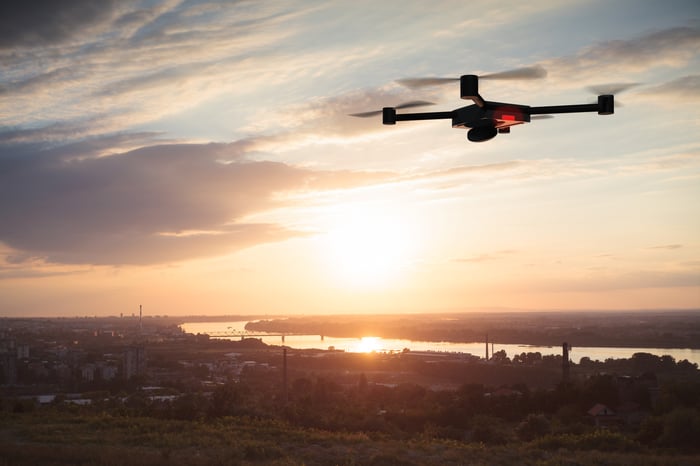 Double the drones, double the fun

Late last month the Pentagon announced in one of its daily briefings on contracts awarded to private contractors that not two, but four separate companies will actually be allowed to bid to supply "orders" under a $99.5 million umbrella contract for FTUAS.

Now, the good news for Textron investors is that Textron is still in the running. (So is Martin UAV.) The bad news is that two new contestants have been added to the competition: Privately held Arcturus UAV, and Textron's publicly traded rival L3Harris (NYSE: LHX) -- named by the Pentagon under its old, pre-merger name L3 Technologies.

And just like that, Textron's chances of winning got cut in half.

Each of these four companies brings something different to the table. In the case of Textron, for example, the company is believed to be offering the Army its Aerosonde UAV, an 80-lb., 12-foot wingspan, catapult-launched drone with a range of 75 nautical miles.

Martin UAV, the other company to originally make the Army's shortlist, will partner with defense giant Northrop Grumman (NYSE:NOC) to bid its "V-Bat," a smaller vertical launch-and-landing UAV that's rated to travel 350 miles without refueling.

As for the new entrants (actually, they were probably among the original field of 11 contestants -- but now they're potential winners):

Arcturus will be imitating Martin with a runway-independent, vertical launch-and-landing system called the "JUMP." Taking fuller advantage of the capabilities this method of launch permits, however, Arcturus's robo-plane is larger than those of any of the others bidding -- more than 18 feet in wingspan.

Finally, L3Harris is expected to offer its APEX drone, a 14-foot wingspan aircraft that launches by catapult and boasts a range of about 62 miles.

Which of these four firms will win the Army's business? That remains up in the air (so to speak). If I had to place a bet, though, I honestly believe that the privately owned contestants appear to have the more innovative products here.

While all four birds appear to meet the Army's requirement for a runway-independent drone that can launch from anywhere, L3's and Textron's entries do require extra equipment in the form of a catapult to launch them. (And then there's the question of how to land them after they're launched.) In contrast, both Martin and Arcturus have worked around this obstacle quite effectively, making their drones capable of vertical launch and vertical landing.

If I were to further opine on which of those two drones has the edge, though, I think I'd have to say that Martin UAV has the better shot. For one thing, it's working with Northrop Grumman to build its UAV, which gives it an immediate "in" with the defense establishment. For another, Northrop already won one big military drone contract involving vertical launched drones when the Navy picked its giant "TERN" to become the new go-to drone for Navy warships that are not aircraft carriers.

Granted, a win here would move the needle a lot more for Textron, which does only about $13.3 billion in annual revenue, than it would for Northrop Grumman, which clocks in at nearly $34 billion in annual sales. Regardless, based on the facts as we know them today, I have to give the edge to Martin UAV -- and Northrop.