Please ensure Javascript is enabled for purposes of website accessibility
Log In Help Join The Motley Fool
Free Article Join Over 1 Million Premium Members And Get More In-Depth Stock Guidance and Research
By Daniel B. Kline – Updated Aug 12, 2019 at 6:03PM

Starbucks (SBUX 1.82%) has invested heavily in technology to make it easier to get a cup of coffee. Its customers can place a complicated order and pay for it via the chain's app without ever talking to a human, but an actual person does make the drinks and prepare the food that was ordered.

In fact, despite its technology, Starbucks remains a labor-intensive business. The company has repeatedly pointed out that its tech efforts allow it to move people into more productive areas (like drink production) to allow it to serve customers more efficiently rather than cut headcount.

A new competitor, however, has built a fully automated coffee shop and has now launched its first store at San Francisco International Airport. Its technology threatens to upend the Starbucks' business model by dramatically cutting labor costs and possibly improving the customer experience. 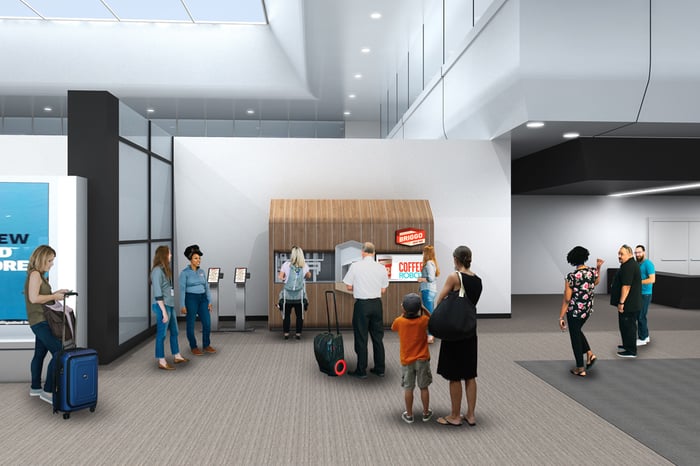 A Starbucks in a small airport may have between four and six workers on shift at any given time. If you assume an average rate of pay of $12 an hour with another $3 an hour in benefits cost, that's $15 an hour per person to run the location. Those numbers (which are admittedly very rough guesses) may vary at slower or busier times, but at $60 per hour for a four-person crew the costs pile up quickly.

The new automated coffee shop, Briggo's Coffee Haus, has no customer-facing employees. Visitors to the store place orders either via the company's app or through mobile screens located at the "cafe" itself. The robotic baristas can make a wide array of espresso-based drinks, coffee favorites, and other beverages.

Each drink takes about two minutes to make, and the system can make roughly 100 beverages per hour. The robotic coffee shops use Arabica beans and offer a rotating selection of locally produced specialty blends.

Drinks remain in a locked area until the customer arrives to pick up his or her order. The machine sends the person who ordered the beverage a text message that lets the purchaser unlock his or her drink when it's ready.

Is this a real threat to Starbucks?

Coffee Haus can operate 24/7, with people only entering the picture for maintenance and resupply. In addition, at only 40-square-feet of floor space, a Coffee House robot cafe can go into a lot of places where a Starbucks location may not make sense.

So far Briggo has put most of its Coffee Haus locations in high-traffic places like airports and convention centers. It's easy, however, to see the company going after large office buildings, college campuses, and other places where a lot of people gather.

In theory, these robotic cafes can be placed in locations that make them more convenient than visiting Starbucks. That could leach sales from the chain, especially in places like airports where Starbucks generally does not offer mobile order and pay. Having a fully automated competitor will probably force Starbucks to consider offering something similar as part of its portfolio.

It's really about offering the right experience at the right time. When a customer wants to linger over coffee in a cafe, he or she probably appreciates a barista-driven experience. In an airport or work situation, consumers may prize speed and convenience over everything else.

Automated cafes won't replace Starbucks, but they will take a share of the market and drive an increase in sales. A product like Briggo's Coffee Haus should force the market leader to adapt and offer solutions that match what consumers want in varying situations.