Is Starbucks (NASDAQ:SBUX) a restaurant company? Or is it more of a branded consumer staple? Maybe it's an "experiential" stock?

As it turns out, Starbucks is all of those things...yet management isn't satisfied stopping there.

Former CEO Howard Schultz was long a step ahead of others in the industry, right up until he left his positions as CEO in 2016 and as chairman in 2018. In the years leading up to his retirement, Schultz presciently called the disruption of brick-and-mortar retail before others, implemented a best-in-class digital rewards program, invested heavily in Starbucks' digital app and mobile-order-and-pay features, and forged delivery alliances with tech giants Alibaba and Uber Eats. Seeing the need to be tech-forward, Schultz even picked a former technology executive, Kevin Johnson, to succeed him as CEO.

Not only have Starbucks' best-in-class tech innovations powered its current results, but these investments could even enable an intriguing new revenue driver for the coffee powerhouse. 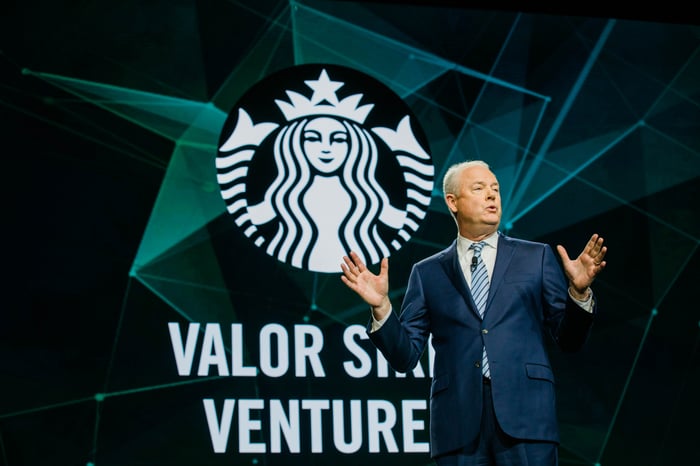 The future looks bright for Brightloom

The original Eatsa was a restaurant concept featuring mobile ordering kiosks and robots that made salads, then quickly delivered orders to cubbies with customers' names on them. The robot-centric restaurant concept was quite novel, but eventually Eatsa decided to close its restaurants and focus solely on technology. So far, it's found some success, with Pizza Hut recently announcing it would use Brightloom's "cubby tech" in some pilot restaurants.

Eatsa -- now Brightloom -- was never totally separate from the Starbucks story. It was a portfolio company of Valor Equity Partners, which runs a venture capital fund focused on food tech, into which Starbucks invested $100 million last March. Not only that, but Starbucks' former chief digital officer Adam Brotman was recently brought on to lead the new company.

The first Brightloom customers will be Starbucks' biggest global franchisees, in Latin America, EMEA (Europe, Middle East, and Africa), and Southeast Asia. Remember, Starbucks has reconfigured its global footprint in recent years, acquiring its large East China franchisee, while divesting most stores outside China and the U.S. to large restaurant operators.

[T]here are approximately 10 large companies that license and operate most of the Starbucks stores throughout EMEA, Latin America and Southeast Asia. Because each of those partners run different technology stacks and they also manage multiple restaurant brands, we had to find a creative way to deliver the consistent Starbucks digital experience to those different partners who run multiple brands and have diverse tech stacks. That's why we partnered to create a new tech company called Brightloom. ...

[W]e didn't invest cash in this new venture, but rather we received an equity stake in return for that software license, a board seat, and a commitment from Brightloom that they're going to focus on our global license partners as sort of the early-stage customers that Brightloom serves. So, Brightloom is going to be in a position to service those Starbucks licensed partners, as well as the broader industry, restaurant merchants who need the same cloud-based software platform.

Starbucks is thus leveraging its internally developed capabilities not only to serve its licensee partners around the world, but also to potentially leverage its tech for ancillary revenue streams from other restaurants across the globe -- all without having to invest any extra cash. That's a pretty good deal, and not totally unlike what Amazon did with Amazon Web Services and cloud computing. (By the way, AWS is now a business with a run rate of $33 billion.)

This could be big

How much ancillary revenue could Starbucks make? It's impossible to say now. But consider that fewer than a third of U.S. restaurants allow mobile payments, and only 3% of U.S. restaurant orders are fulfilled digitally. And that's just in the U.S., which is the most developed restaurant market in the world.

Thus, the opportunity for Brightloom is certainly there for the taking. While some may look at Starbucks' high price-to-earnings multiple and think the stock is too expensive, a large software subscription business could certainly help justify some of the market's optimism.