Big rockets are out. Small satellites -- and the small rockets that can carry them into orbit -- are in.

This was the upshot of StratSpace Intelligence's Intelligence Report & Market Forecast last year, which predicted a big uptick in smaller space rocket launches in coming years, alongside a plateauing of missions utilizing large rockets like the SpaceX Falcon 9 and United Launch Alliance Atlas V. With miniaturization increasingly permitting small satellites to do the work previously only do-able by large satellites -- and the cost of building small satellites falling to just a few tens of thousands of dollars apiece -- there's simply not as much demand for putting big honking satellites into orbit anymore.

The result: There is an "excess" of large space rockets on the market today, a serious overcapacity of about "about 100%" more big rockets than we actually need. That means SpaceX is going to have to find a new use for some of its big reusable rockets. 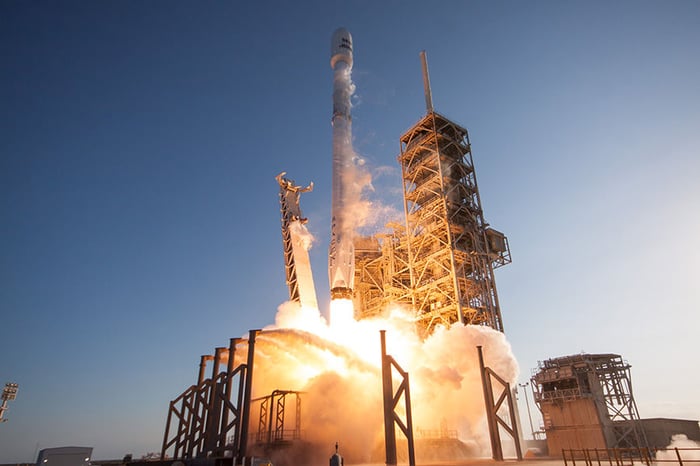 How will SpaceX solve this problem? For a clue, take a walk back with me to 2013, when a relative newcomer to the space industry -- privately held Spaceflight Industries -- negotiated the launch of two Planet Labs' "Dove" nanosatellites into orbit as "ride-share" passengers aboard an Orbital Sciences Antares rocket.

By mediating between Planet and Orbital to get the latter to give a lift to the former, Spaceflight Industries simultaneously enabled Orbital to earn a bit of extra cash selling space that would otherwise have been gone unused atop its rocket, whose primary payload was from NASA -- and created a new business model for itself!

But it also apparently gave Elon Musk a bright idea: Spaceflight Industries was presumably making a profit off of selling access to SpaceX rockets -- so why not take this business directly to the consumer, and pocket the profit itself?

Which is now precisely what SpaceX intends to do.

All aboard the Falcon 9

Last week SpaceX's website announced the creation of a new Smallsat Rideshare Program owned and operated by SpaceX itself.

The company plans to begin "regularly scheduled, dedicated Falcon 9 rideshare missions" to space for satellites massing "up to 150 kg" at prices "as low as $2.25 million per mission." Larger satellites can, of course, also be accommodated -- a Falcon 9 can lift nearly 23 thousand kilograms into Low Earth Orbit, after all -- at a cost of roughly $15,000 to $20,000 per additional kilogram of payload.

Adding to the program's attractiveness, SpaceX is promising to make its rideshare missions available on a regular schedule -- basically, an intrastellar bus route to orbit. It even has its first three missions penciled in on its calendar already: The first dedicated rideshare mission will take place somewhere between November 2020 and December 2021 (presumably there's some flexibility because SpaceX doesn't know how quickly space on its rocket will fill up), followed by another in Q1 2022, and a third in Q1 2023.

One imagines that this clear and dependable schedule is going to prove very attractive to customers, who will no longer need to negotiate for the right to squeeze themselves onto "someone else's mission," and will instead be able to reserve a space, plan ahead, and launch on a predictable timeline.

Of course, what's good news for SpaceX and its customers could be very bad news indeed for a whole range of "new space" companies that have been emerging to service the burgeoning small satellite market, and planning IPOs in the next few years.

Spaceflight Industries itself could prove to be one of the first victims as SpaceX co-opts its business model. But companies such as Vector, Rocket Lab, and Virgin Galactic are all basically building their businesses around the idea that while SpaceX is busy hoisting big satellites into space, they can sneak in and capture the small satellite market by offering dedicated flights and low prices to customers beneath SpaceX's notice.

Now SpaceX has noticed -- and the original space market disruptor looks ready to shake things up once again.