But losses are piling up.

Zillow Group (Z -4.95%) (ZG -4.50%) is ramping up multiple high-potential businesses, but its growth initiatives are coming at a heavy cost. The company is producing sizable losses, as evidenced by its recently reported second-quarter results.

Zillow's revenue soared 84% year over year to $599.6 million, fueled by the growth of the company's new homebuying service, Zillow Offers.

Zillow purchased 1,535 houses and sold 786 in the second quarter, representing sequential growth of 71% and 90%, respectively. From this activity, Zillow generated $249 million in Q2 revenue in its "homes" segment.

Notably, more than 69,000 homeowners requested an offer from Zillow to purchase their home during the second quarter. That represents growth of 94% from the first quarter. "The demand signal for Zillow Offers is incredibly impressive as seen in the annualized revenue run rate going from zero to $1 billion in just a year," co-founder and CEO Rich Barton said in a press release. 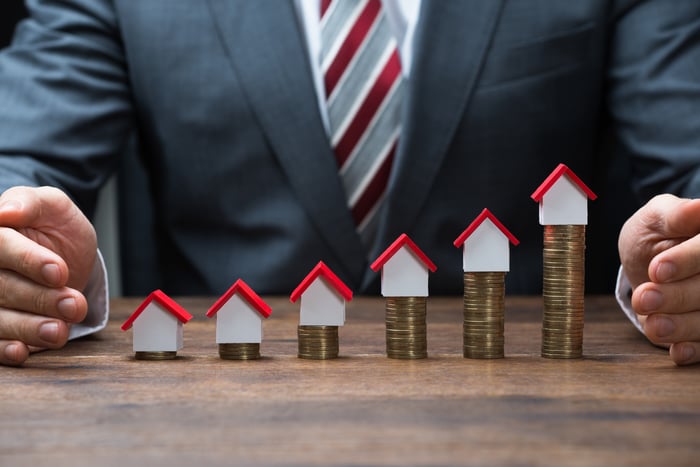 Zillow's rental business is likewise expanding at a solid clip, with revenue rising 28% year over year to $42.7 million. The gains were driven by strong demand from multifamily property managers to advertise on Zillow's websites and mobile apps.

However, Zillow's Premier Agent business saw revenue increase by less than 1%, to $232 million. The tepid growth was due in part to a new monetization model that allows agents to pay a fee only when they close a transaction with a consumer lead, instead of paying Zillow for advertising up front.

Moreover, Zillow's growth investments continue to take a heavy toll on its profitability. The company's adjusted earnings before interest, taxes, depreciation, and amortization (EBITDA) -- which excludes share-based compensation and acquisition-related costs -- declined by 96%, to $2.3 million. Zillow also generated a $72 million net loss, compared to a loss of $3.1 million in the prior-year period.

Zillow lowered its guidance for full-year Premier Agent revenue to between $900 million and $915 million, down from prior guidance of $910 million to $930 million.

During a conference call with analysts, CFO Allen Parker said that the reduced forecast was related to Zillow's rolling out its new monetization model to more markets. "This means that a portion of previously expected Premier Agent revenue for markets where we are expanding our test is now expected to shift from Q4 into future periods to correspond with closing of Zillow-attributed transactions," Parker said.

At scale, we believe that we can deliver 400 to 500 basis points of return before interest expense. Over time, our unit economics should benefit even more from other adjacent services, like mortgage origination, title, and escrow. We expect to be able to leverage these services to support Zillow Offers and improve the consumer's overall transaction experience, while also generating cost savings for Zillow and our customers.

In turn, the company is increasing its pace of expansion for Zillow Offers in the coming quarters.

"It is clear that the concept of being able to sell your home without the hassle and uncertainty is a welcome relief to many," Barton and Parker said. "In order to meet the strong consumer demand for Zillow Offers, we are accelerating our plans to bring this transformative way for people to sell and buy their homes to more markets across the country."