Technology is disrupting the housing market, and companies like Zillow (NASDAQ:Z) (NASDAQ:ZG) and Redfin are leading the charge. In the beginning of the tech revolution, these websites enabled home buyers and sellers to conduct a significant amount of research before ever leaving their home or speaking to an agent. Now, services called "iBuyers" are directly buying and selling homes for investment purposes. Like many other consumer technology innovations, this has been great for the consumer, but it's not clear if the companies involved will be able to translate iBuying into profitable enterprises.

Zillow aggressively moved into the iBuying space last year, and its second-quarter earnings report provided a window into how that initiative is progressing. 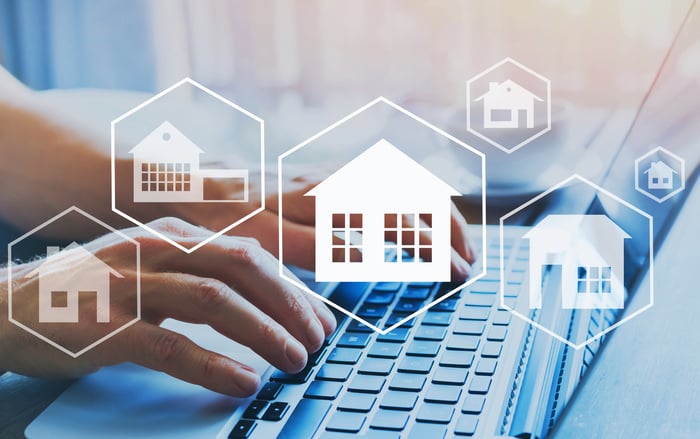 A look into Zillow's Q2 numbers

Zillow's reported Q2 growth figures that really jumped off the page. Revenue grew 84%, led by $248.9 million in organic growth from the company's homes segment. Zillow started buying homes in May 2018, but it didn't start selling until July 2018. Since the company records revenue only when it sells homes, it didn't book homes segment revenue until Q3 2018.

The other segments turned in respectable growth as well. IMT, short for internet, media, and technology, is Zillow's legacy business, which books website advertising revenue and fees charges to real estate agents and landlords for listing properties. IMT grew 6% in the quarter, consistent with its growth rate from Q1 but a slowdown from prior years. The mortgages segment grew 40% as the company integrates a recent acquisition to beef up this operation.

Although revenue growth was robust, the elephant in the room was widening losses, again driven by the homes segment. The homes segment recorded negative adjusted earnings before interest, taxes, depreciation, and amortization (EBITDA) of $56.5 million, and the losses are only expected to get bigger as Zillow rolls out the homes segment to more markets in the coming quarters. Because Zillow borrows money to buy property, it incurs interest expenses, which means that actual earnings (not EBITDA) are even lower for the segment.

On the other hand, Zillow's IMT segment put in a solid quarter, generating $64.1 million in adjusted EBITDA. In practice, the company is using the cash flow generated by the IMT segment to fund its losses in the homes segment. Clearly, Zillow's strategy is to prioritize growth at the expense of earnings. But this strategy will only work if the homes segment eventually becomes profitable, which is far from certain today.

The economics of Zillow's homebuying

In the second quarter, Zillow bought 1,535 homes and sold 786. These are big increases from prior quarters, and the numbers will only go up from here. Today Zillow operates its homes segment in about 15 markets but has plans to be in 26 markets by early to mid 2020. As the company further scales up its home-flipping activities, the transaction economics will come under greater scrutiny.

In its quarterly shareholder letter, the company provided a breakdown of an average home purchase/sale transaction in its homes segment:

The numbers don't look good. Although Zillow is making money, on average, from selling homes compared to the price it paid, it is losing money after accounting for interest expenses. It's also important to note that these expenses do not account for corporate overhead including technology developed to support the capabilities on its website.

The fact that Zillow is losing money on flipping homes at the unit level is a red flag that the economics of this business may not scale well. The company has provided a long-term forecast of delivering a 2% to 3% return on homes after interest expenses by lowering its costs per home. In addition, the company believes it can churn up significant ancillary business from home transactions by adding on mortgages and driving traffic to its website for real estate agents. However, until the returns of its home transactions improve, at best the activity will be a loss leader for the foreseeable future.

A long road to profitability

Generally speaking, a business's value is its ability to produce cash flow for its investors in the long term, through either its operating activities or a sale of its assets. It's OK if a company runs losses if it is investing in businesses that could eventually be cash flow hogs.

The path to profitability became much less clear at Zillow after the launch of its homes segment. To be bullish on the stock, you really need to believe that flipping homes will eventually generate cash flow for Zillow. It's true that Zillow could foster an enormously valuable home buying platform, but it could also be true that the cost of building that business will not be justified.