Recession worries plunged the stock market into a sea of red today. That sell-off, along with some worrisome data, sent crude prices on a downward spiral, which put pressure on most oil stocks. Several tumbled on the day, led by SM Energy (NYSE:SM), Noble (OTC:NEBLQ), and California Resources (OTC:CRC), which all slumped more than 11% at 2:30 p.m. EDT on Wednesday.

Crude prices fell more than 3% on the day. Two factors weighed on oil prices. First, oil storage levels in the U.S. unexpectedly increased by 1.6 million barrels, according to the latest government report. That marked the second straight rise in oil inventories, which surprised the market since it anticipated that storage levels would decline by 2.8 million barrels. This data suggests that demand isn't as strong as expected, which could be due to a slowing global economy. 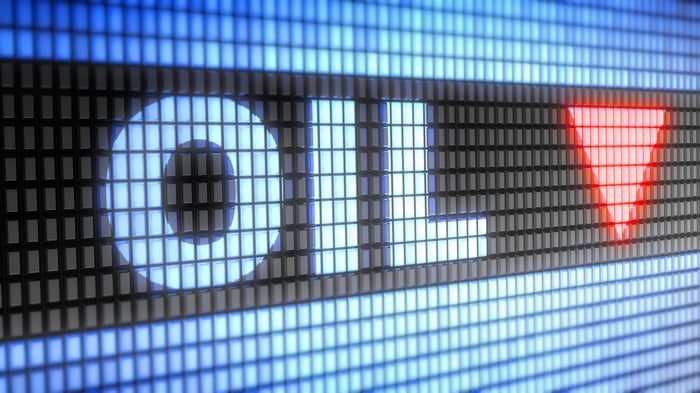 Meanwhile, the bond market inverted today, which has typically been a good indicator that a recession is on the way. That's potentially bad news for the oil market since the demand for crude tends to decline during a recession. With the oil market currently well supplied, prices could plummet if demand dives due to a downturn.

The prospect of lower oil prices is bad news for financially weaker oil producers like SM Energy and California Resources. SM Energy has been working on improving its balance sheet by growing earnings and trying to generate free cash flow so that it can pay down debt. Lower oil prices will make it harder for the company to push down its leverage ratio, which it aims to get below 3 times by year-end. While that would be an improvement, it's still twice as high as most rivals'.

California Resources also has a balance sheet problem. The oil company ended last year with a leverage ratio of around 4 times. While that's a vast improvement from more than 9 times in 2016, it's well above the company's target of 2 times. That goal will be harder to reach at lower oil prices.

Meanwhile, offshore drilling stocks like Noble and industry leader Transocean (NYSE:RIG) also plunged today, with the later slumping as much as 9.5% on the day. While these companies don't produce any oil, their stock prices still tend to be highly volatile when crude makes a big move. That's due to the concern that oil companies might not approve as many new drilling projects if a recession saps demand for oil. If that happens, it will impact demand and dayrates for offshore rigs, which would hurt the profitability of companies like Noble and Transocean.

Market watchers have been calling for a recession ever since we got out of the last one roughly a decade ago. At some point, they'll be correct, because the economy does ebb and flow. Because of that, investors should make sure they own stocks that can withstand the next downturn. One way to do that is by avoiding companies with weaker financial profiles like SM Energy and California Resources since they might not make it through.

However, the global economy has expanded over the long term. Investors should keep that in mind and look for companies positioned to thrive over the long haul.