Kontoor Brands (KTB -1.81%) released its first earnings report as a publicly traded company last week on Aug. 8, following its spin-off from former parent VF Corp (VFC -2.73%) on May 22. The owner of the Wrangler and Lee jeans brands is down roughly 29% from its spin-off pricing, and as I've argued recently, this is creating an appetizing scenario for dividend-seeking investors looking for a balance between safety and appreciable yield. Below, let's review key points made by CEO Scott Baxter during the company's first earnings conference call, which illuminate Kontoor Brands' strategy as it begins to manage its own destiny. 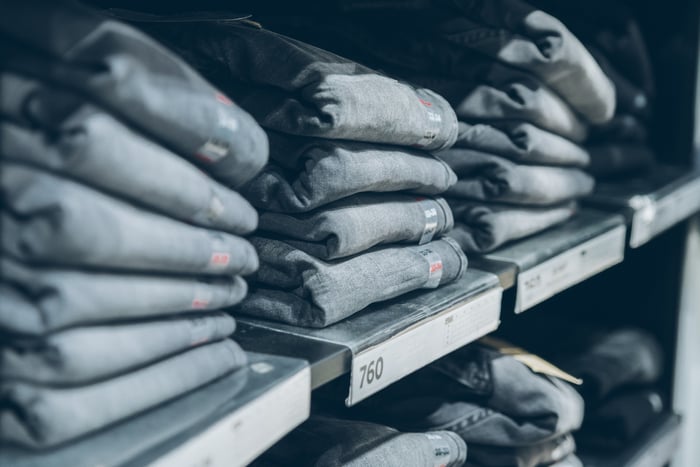 Innovation is key after separation from VF Corp

[W]ith respect to innovation, as a stand-alone company, we are now positioned to more effectively invest behind, showcase, and scale new product technologies and advanced manufacturing capabilities like never before. Within innovation, we will focus on 2 primary areas: product and manufacturing.

In the quote above, CEO Baxter alludes to the fact that Kontoor's previous product and manufacturing breakthroughs were constrained by its existence under VF Corp as a single entity among numerous competing portfolio companies.

Baxter cited two innovations the company is actively scaling as examples of Kontoor's potential, unharnessed from a parent organization. The first is a product in the Lee Jeans line referred to as "Body Optix." This product was originated from a mixture of materials research, imaging technologies, and insights gained from cognitive science. In essence, contoured fabric and the strategic placement of seams and pockets results in a product that theoretically flatters the wearer's physique.

The second innovation is a manufacturing improvement in the jeans dyeing process. Kontoor has introduced a dyeing technology called "Indigood" that utilizes foam rather than water as a carrier for jeans dye. The process is aimed at boosting Kontoor's bona fides among millennial consumers, as well as the company's desire to reduce its own manufacturing waste. According to Baxter, the process uses zero water, utilizes 60% less energy versus legacy dyeing methods, and generates 60% less waste. Kontoor claims the new process will help it save 5.5 billion liters of water by 2020.

An efficient supply chain with room for improvement

From a supply chain and manufacturing perspective, Kontoor Brands uses sustainable technology and breakthrough innovation to address consumer needs, to minimize our risk exposure and improve our operating efficiency all while demonstrating our commitment to good corporate citizenship. We are and will remain committed to responsible sourcing and sustainability initiatives.

During the earnings call, CEO Baxter made clear that Kontoor's supply framework is steeped in principles of sustainability and waste reduction, as can be seen in the Indigood process discussed above.

But Baxter listed several native advantages of the company's supply chain that can be sharpened further by a dedicated management team. These advantages include proprietary lasering technology, a vertically integrated supply structure, which is one of the largest denim manufacturing operations in the world, and a surprisingly large manufacturing footprint in North America, based mostly in the U.S. and Mexico.

This last advantage may have cost Kontoor some points in profit margin percentage in past years, as its competitors tend to concentrate manufacturing in China and other south Asian countries to reap cost advantages. But a localized supply chain gives the Wrangler and Lee brands an edge in speed in getting new fashions to market within the company's primary geographical sales region -- the United States.

A subtle approach to dealing with import tariffs

Today, we have very limited tariff exposures in China with less than 1.5% of our global production for exports to the U.S. We do have a sizable production presence in Mexico, which, as we stated, is a distinct competitive advantage given its scale and speed to market. And we are optimistic that the pending USMCA [United States-Mexico-Canada Agreement] trade agreement with Mexico and Canada will ultimately be approved. However, as the trade environment continues to evolve, be assured that we have developed a multitude of strategic alternatives to implement, if necessary.

Another advantage of building a primary supply chain in North America is implicit in Baxter's comments on tariffs above: Kontoor has limited exposure to the ongoing trade war between the U.S. and China, at least as it relates to manufacturing cost.

Baxter went on to elaborate on the company's strategy regarding tariffs on goods it produces in China and any potential import tariffs on its Mexican production, as the U.S. has also threatened to impose tariffs on items manufactured south of the border. Baxter stated that "the most recent tariffs proposed act [as] an incremental tax on the U.S. consumer," and that retailers will look to pass on cost increases to consumers in the form of higher prices.

For now, Kontoor Brands intends to avoid uniform price increases on goods in response to any escalated production costs. Rather, the company's immediate plan is to study the price elasticity of demand around various products, and implement price hikes to retailers (and on jeans sold directly to consumers) judiciously and with restraint.

This slow and circumspect strategy may cause a bit of margin deterioration should the U.S. follow through with its latest proposed tariffs aimed at various trading partners. However, over the long term, Kontoor is focused on extending its customer base, and it appears willing to absorb some cost pressure in order to maintain and increase its global jeans market share.