Please ensure Javascript is enabled for purposes of website accessibility
Log In Help Join The Motley Fool
Free Article Join Over 1 Million Premium Members And Get More In-Depth Stock Guidance and Research
By Lee Samaha – Aug 18, 2019 at 9:19AM

The railroad stock offers a decent dividend and has earnings growth opportunities in the coming years.

Under the circumstances of a slowing U.S. industrial economy, it's been a pretty good year for Union Pacific (UNP -2.20%). The stock is up more than 22% on a year-to-date basis at the time of writing, and this comes even as its revenue carloads declined 3% in the first half while management's outlook for the second half calls for a 2% decline. Throw in the disappointing earnings and outlooks from peers like CSX (CSX -2.02%), and the narrative quickly turns negative. However, there's still a lot to like about the stock and a strong case for buying it, so let's take a look at it.

A stable source of dividends

Investors buy stocks for all sorts of reasons, and when it comes to investing in railroad stocks, long-term investors are usually willing to ride out the inevitable cyclicality in their earnings. It also helps if there's a decent dividend to tide over investors in the down periods, and Union Pacific's forward yield of 2.3% is notably higher than the current 10-year treasury yield of 1.6%. 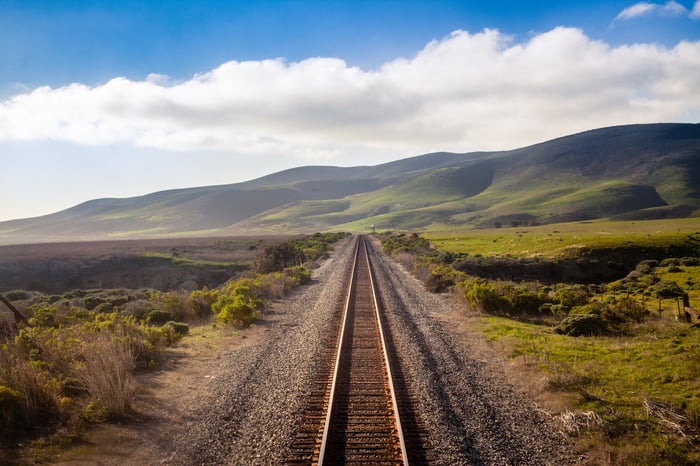 Indeed, investors can think of Union Pacific as a kind of bond-like investment, not least because of the relative stability of its market positioning. While it's true that rail faces competition from other transportation methods -- such as trucking -- the reality is that the biggest railroad stocks essentially operate as duopolies in their respective geographies. Union Pacific and Berkshire Hathaway's BNSF dominate the western U.S., while CSX and Norfolk Southern do the same in the east. As such, investors are often willing to pay a valuation premium in order to reflect a greater level of confidence in their long-term ability to generate earnings and cash flow.

Turning specifically to Union Pacific, the company has a commitment to paying out 40% to 45% of its earnings in dividends. Moreover, the current forward dividend yield of 2.3% lies at the top of management's payout ratio range. In other words, it's not excessive and can grow provided earnings grow in the future. 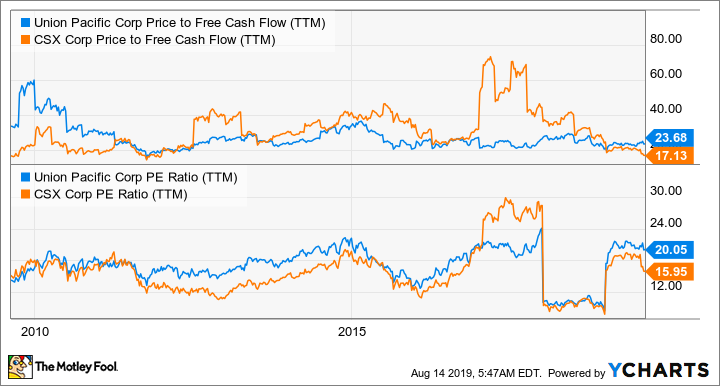 The question now turns to how reflective the current earnings are of the company's long-term prospects. Moreover, is there any reason to believe the company can grow its profit significantly in the future?

The answers to the two questions are intrinsically linked. Let's put it this way: There is a reason Union Pacific can raise its earnings margin over the long term, and if you are pricing in a cyclical stock on the basis of its earnings over the cycle, then it figures that you should accommodate your valuation to factor in the new elevated earnings margin.

In a nutshell, margin expansion opportunity comes from the adoption of precision scheduled railroading (PSR) -- an operating methodology that emphasizes running trains between two points on a network at fixed times instead of a traditional hub-and-spoke model -- which has been proven to work in the industry. As such, Union Pacific's adoption of it should lead to a dramatically improved operating ratio in the coming years.

Indeed, the second quarter saw further progress on management's aim to achieve an operating ratio (OR) of below 61% in 2019, and then below 60% in 2020. The OR is simply expenses/revenue (a lower number is better).

The operating ratio actually came in at 59.6% in the quarter compared to 63% in the same period a year ago. While the ratio was positively affected by 120 basis points, or bp, (where 100 basis points equals 1%) due to lower fuel costs and a payroll tax refund and negatively affected by 60 bp due to weather, there was still 280 bp of core operating improvement -- just factoring in the latter meant the OR would have been 60.2%.

Moreover, CFO Rob Knight affirmed the operating ratio targets for 2019 and 2020 and said the company aims to get to 55% over time. It's an ambitious target, particularly as the closest comparable is the 58.2% OR achieved in 2016 by longtime PSR adopter Canadian National Railway.

Clearly, there's work to do to get there, but Union Pacific is making good progress. For example, it reported a host of improving metrics that are associated with a PSR-led lowering of the OR.

Train speed was negatively affected by flooding. Nevertheless, investors will want to see both train speed and car trip plan compliance improve in the coming quarters.

Putting all of this together, let's assume Union Pacific's current P/E ratio and dividend yield are deemed acceptable by investors. Assuming the company's operating ratio can fall to 55% over time from 62.7% in 2018 as management claims, then under these conditions, Union Pacific's revenue can fall 17%, and earnings will still be equivalent to those achieved in 2018.

Of course, the reality is that the OR is likely to go up when revenue falls (railroads tend to have high fixed costs), so this illustrative example is unlikely in reality. However, the point is that if the average OR over the cycle is set to fall thanks to PSR then investors should upgrade their expectations for earnings (and dividends) over the cycle too.

All told, provided Union Pacific stays on track and investors can stomach some possible disappointment, the stock looks worth buying for long-term investors focused on income.