Drugs and medical devices indicated for the treatment of diabetes are a booming part of the diverse healthcare sector. Over the next decade, in fact, diabetes products are projected to be the second fastest-growing area of the entire sector, according to a recent industry report by EvaluatePharma.

Armed with this insight, we asked three of our Motley Fool healthcare contributors which diabetes stocks they think should be on every investor's radar during the month of August and beyond. They picked Eli Lilly (NYSE:LLY), Abbott Laboratories (NYSE:ABT), and Tandem Diabetes Care (NASDAQ:TNDM). Here's why. 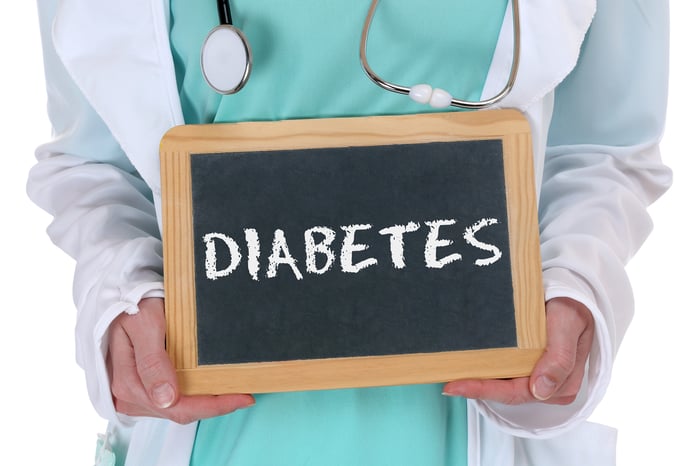 A showdown in diabetes care

George Budwell (Eli Lilly): Pharma titan Eli Lilly is without question a top diabetes company worth keeping tabs on right now. The lowdown is that Lilly's shares have come under pressure in the second half of 2019 due to concern over the long-term commercial fate of its GLP1 agonist Trulicity.

In brief, Trulicity has been playing a big part in the company's ability to overcome the staggering declines for the former star insulin products Humalog and Humulin. Underscoring this point, Trulicity's second-quarter sales jumped by an eye-catching 32% year over year to $1.03 billion, making it the drugmaker's best-selling medicine by a wide margin. Lilly, though, has designs on growing Trulicity's annual sales by another 500% over the next five years, which would allow the company to stay well ahead of the ongoing sales erosion for Humalog and Humulin.

To do so, the drugmaker's near-term goal is to broaden Trulicity's label to include a higher dose indication for patients with Type 2 diabetes and a second label expansion that would deem that the that drug also conveys a significant cardiovascular benefit for diabetes patients. Lilly has already submitted Trulicity's cardiovascular outcomes trial data to regulators in both the EU and the U.S. for review, and the company should have the drug's higher dose indication under consideration with regulators shortly.

The fly in the ointment is that the Danish pharma giant Novo Nordisk has three similar products (Victoza, Ozempic, and an oral version of Ozempic) that could significantly stunt Trulicity's growth in the years to come. Thus, Trulicity's exponential growth trajectory is far from a sure thing. Diabetes investors, in turn, will definitely want to keep a close eye on this developing story.

Waiting on a big decision

Keith Speights (Abbott Laboratories): While Abbott Labs isn't only focused on diabetes, there's no question that diabetes care is an important growth driver for the company. Abbott reported organic sales growth of 70% in the second quarter for its Freestyle Libre continuous glucose monitor (CGM).

Customers love Freestyle Libre for its features (especially that no fingersticks are required to calibrate the device). But they also love its value. Abbott Labs CEO Miles White said in the company's second-quarter conference call that the CGM system "offers a unique value proposition and that's by design."

I expect sales for Freestyle Libre will soon shift into an even higher gear. Abbott has filed with the U.S. Food and Drug Administration (FDA) for approval of the next-generation version of the device as an integrated continuous glucose monitoring (iCGM) system to be used as part of an integrated system with other medical devices such as automated insulin dosing systems and insulin pumps.

There's no exact date yet on when the FDA will make its decision. However, White expressed confidence in the Q2 call that Abbott will win approval for the new version of Freestyle Libre, with COO Robert Ford adding that the company expects that approval "relatively soon."

Abbott also has several other growth drivers outside of diabetes, including its Alinity lineup of laboratory diagnostic instruments. I suspect, though, that the growth story for Freestyle Libre will capture a lot more attention from investors in the next few quarters, making Abbott Labs a diabetes stock to watch closely in August and beyond.

The shift has been sparked by the launch of Tandem Diabetes first-generation automated insulin device last year. Competition is coming, but Tandem Diabetes is also poised to launch a second-generation system that could keep it ahead of the pack, making it a top stock to be watching now.

The company's first system improved treatment by suspending insulin delivery from its pump if the CGM shows a patient's at risk of a dangerous blood sugar low. The second-gen system will expand upon that technology to also include automatically increasing insulin to prevent blood sugar highs. Demand for the first-gen system has been so strong that Tandem's revenue surged 173% year over year to $93 million in the second quarter. The company plans to launch the second-gen system in Q4, pending FDA approval.

The availability of a complete system like this later this year will give Tandem Diabetes an important head start. Most patients don't swap their pump until the pump's warranty period ends. Since Tandem's warranty lasts four years, the company could enjoy revenue tailwinds from maintaining market share for years and because only about 30% of the 1.25 million Type 1 patients in the U.S. are on pump therapy now, there are plenty of new users to win over, too.