Please ensure Javascript is enabled for purposes of website accessibility
Log In Help Join The Motley Fool
Free Article Join Over 1 Million Premium Members And Get More In-Depth Stock Guidance and Research
By David Jagielski – Aug 21, 2019 at 10:26AM

The honeymoon phase is over for Beyond Meat as investors are starting to take a closer look at the stock and realizing it may not be worth its astronomical valuation.

The hype surrounding plant-based burgers has sent Beyond Meat's (BYND 0.75%) stock soaring this year, more than doubling since its IPO in May. However, some cracks are starting to show in this once flawless stock and it has fallen by nearly 20% in the past month. As bad as that has been, it wouldn't be surprising to see even more of a sell-off take place.

Why the bubble may have already burst

Beyond Meat's products have been viewed as a game-changer for the food industry. Its meatless products provide an option for vegetarians who wish to enjoy the same indulgences meat-eaters do, without the guilt. And while it's still a very popular choice, the problem is that more attention is being placed on the actual burgers themselves and whether they truly are better than meat for the eater. The verdict isn't out yet, but indications thus far are that Beyond Meat's products aren't any healthier than meat at all, which could be devastating to the company's long-term growth prospects. 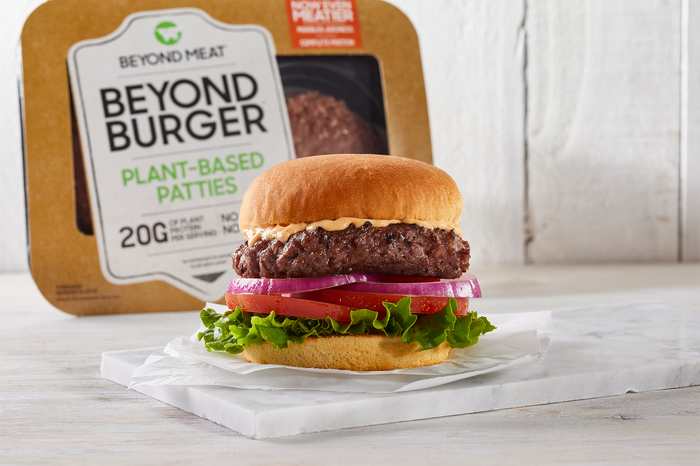 Beyond Meat burgers are more expensive than typical beef patties, retailing as high as $12 per pound compared to $5 for beef, and if they're not a healthier option, they're going to be a tougher sell for those consumers who may be on the fence. While the plant-based patties may still appeal to consumers who choose not to eat animal-based products, that's a much smaller subset of the market. There would have been a lot more growth potential if the products were seen as a healthier option to meat.

Instead, the market for Beyond Meat's products may be much more limited, and for many consumers, the patties may not be worth the added cost. It could be a deflating blow, and it's no surprise investors have started to cool their enthusiasm for the stock.

There's a lot of competition and more on the way

Another reason the stock isn't all that alluring is that it also doesn't have the moat needed to justify such a big premium on its share price. There aren't significant barriers to entry preventing competitors from entering the space and bringing better-tasting products to market. The Impossible Whopper will be available this year at Burger King locations, which is made by Impossible Foods. There are also the Lightlife burgers, owned by Maple Leaf Foods  (MFI -0.52%) which have been making their way into grocery stores in Canada and the U.S., including Amazon's (AMZN -0.12%)Whole Foods. Meanwhile, industry giant Tyson Foods (TSN -1.22%) is launching products using pea protein to make chicken-like nuggets, in addition to blended burgers, which will include Angus beef.

These are just a few examples of the competitors Beyond Meat will face. And as the popularity of plant-based products grows, so too will the interest from other companies looking to make a product that could take away some of that market share. Restaurants and stores have already been partnering up with brands, and the other danger is that the industry could become very fragmented. While Beyond Meat has already secured some deals of its own, it's going to have to do a whole lot more to justify its lofty price tag.

Its valuation is through the roof

Currently, Beyond Meat's stock is trading at 26 times its book value, a significant multiple by any stretch. The company is not yet making a profit and the stock trades at a multiple of more than 50 times its sales. While Beyond Meat is sometimes given a free pass because of the growth that it offers, investors should consider that by comparison, Amazon trades at a much more modest 17 times book value and less than four times its sales.

Why does it matter to investors?

Now that Beyond Meat's stock is falling and the hype is starting to fade, this decline could be just the start of a much bigger correction for the stock as it still looks heavily overpriced today. For investors who own Beyond Meat, it may be a good idea to at least put a stop-loss in place to prevent further gains from being erased in case the stock isn't able to recover.

Unless Beyond Meat is able to secure a deal with a big restaurant chain like McDonald's (MCD 0.25%) to give it a huge advantage over its competitors or it makes some big strides toward posting a profit, it's going to be hard to justify buying the stock at its current valuation.

John Mackey, CEO of Whole Foods Market, an Amazon subsidiary, is a member of The Motley Fool's board of directors. David Jagielski has no position in any of the stocks mentioned. The Motley Fool owns shares of and recommends Amazon. The Motley Fool has a disclosure policy.