There are more than a couple of reasons why investors should be concerned about Shopify’s foray into fulfillment.

Shopify (SHOP 2.82%) has been one of the hottest growth stocks this year, rising 170% year to date. With significant year-over-year growth and still lots of room for its sales to continue rising, investors have been very bullish on the company's future.

However, like many growth companies, Shopify is always looking for the next big thing. Earlier this year, the company announced that it was going to be getting into the fulfillment business, an arena that Amazon.com (AMZN 2.49%) has dominated. While Shopify isn't going to necessarily be competing head-on for all of Amazon's customers, it's going to be focusing on small and mid-size merchants that may otherwise find Amazon a bit too expensive and customer-focused.

Shopify plans to offer two-day shipping for U.S. merchants as soon as this year. It's going to take a lot to build up Shopify's capabilities, with the company pledging to invest more than $1 billion dollars over the coming years to do so. It's a bold move, and growth investors like companies that aren't afraid to take on some risks. There's certainly no bigger challenge for the company than to try to wrestle away market share from Amazon. 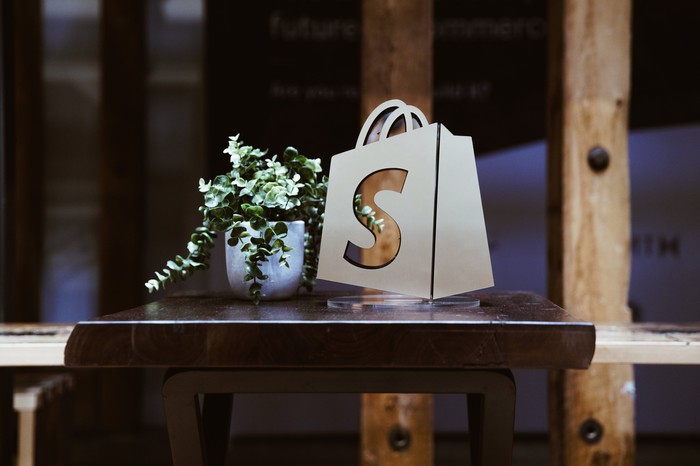 The move is a great way for Shopify to generate more revenue from its existing merchants while possibly adding new ones. Although Shopify has been seeing its sales rise, they've been growing at a decreasing rate and this could be a great way to turn things around.

Here's why it may not be a great idea

While Shopify will be able to grow its sales with this move, it's going to come at a big cost. That's a problem for a company that hasn't turned a profit and that is not likely to become profitable anytime soon. Rising costs have outpaced revenue growth and by taking on a large new venture, that trend is not going to stop anytime soon and it could even deepen Shopify's losses.

From a cash flow perspective, Shopify has generated just $59.5 million in cash from its operating activities over the past four quarters. And while investments have given the company an occasional boost, they've also swung in the other direction as well. With well under $1 billion in cash on its books, it's likely that Shopify is going to have to raise funds some other way to help its new business grow (unless it decides to liquidate its short-term investments and go all-in, which would be aggressive).

Shopify hasn't shown much interest in taking on debt, and that means issuing shares might be the path of least resistance in raising capital. That's bad news for existing shareholders who will see their ownership diluted.

However, even if the company is able to generate the cash it needs without upsetting too many shareholders, there's still a good chance Shopify may have underestimated just how expensive this latest venture will be.

By not targeting the big merchants, Shopify's potential profits and revenues gained from providing fulfillment may be limited. The end result could be the company sinking further down into more of a loss position for the sake of adding to its sales numbers in the hopes that partnering with these merchants while they're still small will pay off over the long haul.

It's a strategy that could also end up draining more cash as well, putting Shopify into a worse position overall. Competing with Amazon, even on a small scale, could prove very costly to Shopify if it finds itself biting off more than it can chew.

For investors who own shares of Shopify, this could lead to some challenging times ahead for the company. While the stock is flying high today and looks positioned to soar forever, investors should remember that in the past, Shopify's shares have plummeted with little notice as a result of being targeted by short-seller reports from Andrew Left's Citron Research, criticizing the company's business model.

With Shopify trading around its all-time high, it could once again be the target of short-sellers. There's far more room for the stock to fall than there is potential for it to rise. As the company starts building its fulfillment centers and investors see the impact this has on its financials, investors may get cold feet again, bringing the bullish run to an abrupt halt.

Going into fulfillment could prove to be the company's undoing as Shopify has faced many challenges to turning a profit already, even before trying to take on the behemoth that is Amazon.

John Mackey, CEO of Whole Foods Market, an Amazon subsidiary, is a member of The Motley Fool's board of directors. David Jagielski has no position in any of the stocks mentioned. The Motley Fool owns shares of and recommends Amazon and Shopify. The Motley Fool has a disclosure policy.