Please ensure Javascript is enabled for purposes of website accessibility
Log In Help Join The Motley Fool
Free Article Join Over 1 Million Premium Members And Get More In-Depth Stock Guidance and Research
By Harsh Chauhan – Aug 22, 2019 at 6:31AM

Investors should keep a close watch on this top cybersecurity play going into its earnings report.

The U.S-China tariff war, combined with acquisition costs, have knocked the wind out of Palo Alto Networks (PANW 2.45%) in recent months, bringing an end to the high-flying cybersecurity specialist's terrific run on the stock market. But the Nikesh Arora-led company has the chance to turn investors bullish again when it releases its fiscal 2019 fourth-quarter results on Sept. 4.

Still, Palo Alto's turnaround is not guaranteed, as the trade war is showing no signs of fading away, with none of the parties willing to concede an inch. Let's see how this macroeconomic event can affect Palo Alto Networks once again in the coming weeks. Palo Alto management had said on the last earnings conference call that its fourth-quarter earnings will be impacted to the tune of $0.02 per share thanks to "U.S. tariffs on Chinese-origin goods."

The cybersecurity specialist had to take this step, because the Trump administration announced in May that tariffs on $200 billion worth of imported Chinese goods will be raised from 10% to 25%. This means that for any goods Palo Alto imports from China to use in its products and services, it will now have to pay a higher price.

Now, you might be wondering what is it that Palo Alto imports from China given the company is known for selling security subscriptions and services. But there's a part of Palo Alto's business that does involve selling hardware.

The hardware that Palo Alto sells could use Chinese components, or they might be made in China, and the company will now have to pay a higher price to import them into the U.S. The company still generates over 38% of its revenue from the product-related businesses that include the sales of hardware, so it is bound to incur an increase in costs.

Moreover, the Trump administration has its finger on the trigger and plans to impose additional tariffs on the remaining Chinese imports in December. So it's possible Palo Alto will issue additional warnings that its business will be further impacted by the trade war.

Palo Alto stock had surged more than 35% this year, but it pulled back in the wake of the company's tepid earnings guidance. 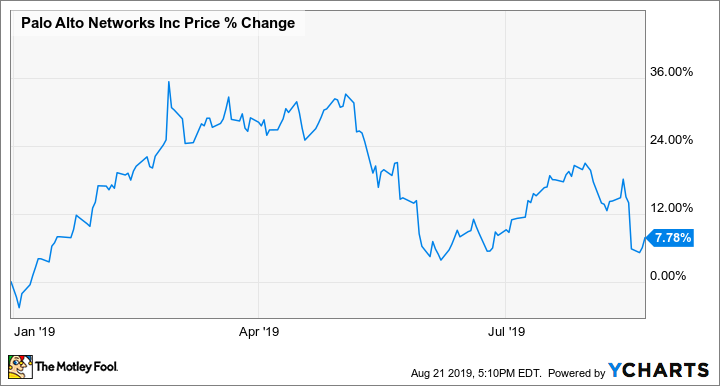 As Palo Alto grapples with the effects of the trade war, it may also find it difficult to raise the prices of its firewalls to offset cost increases without creating the risk of losing business to competitors.

That's how we get most of our new firewall customers, if somebody is refreshing their -- on a firewall refresh and they're replacing old firewalls with new firewalls and that's how we go in and take market share and continuing to land and expand, right. The other refresh that people talk about is our own internal refresh. So our own customers having sort of reached five to seven-year life of their firewalls and they're replacing those firewalls.

So if Palo Alto tries to increase prices for these products, it might fail to win new business and concede market share to rivals. This is why it would be wrong to say that Palo Alto is a trade war-proof stock simply because it plies its trade in the cybersecurity industry that's enjoying secular growth.

In the end, investors shouldn't forget Palo Alto is making a ton of smart moves to capitalize on the bigger cybersecurity opportunity through its acquisition-driven strategy. This is why it's a good idea to take advantage of the recent pullbacks in Palo Alto stock. Ultimately, the company can overcome any trade war-related weaknesses in the long run thanks to a rapidly growing top line and its move into fast-growing markets with its latest acquisitions.