The battle for the edibles market, and beverages, in particular, is about to heat up, and Aurora Cannabis could be in danger of falling behind its peers.

Cannabis-infused beverages could soon be a big hit. Being able to drink a beverage, get a buzz, and not be hungover the next day could prove to be an easy sell to people who consume alcohol. While the segment hasn't taken off in the U.S. where beverages still represent a very small fraction of cannabis sales, that might not be the case for much longer.

Why Canada could prove to be a big test market

North of the border, Canada is expected to permit edible marijuana sales later this year, including beverages. Industry giant Canopy Growth (CGC -6.66%) partnered with big brewer Constellation Brands (STZ 2.08%) and Hexo Corp (HEXO -1.68%) also has a deal in place with Molson Coors Canada. It's going to be the first time some of the big players in the beverage industry take a crack at producing cannabis-infused drinks, and how successful their products are could be a good indicator as to just how big the global market for cannabis beverages will be. For beer makers, it presents a great opportunity to take advantage of the fast-growing cannabis industry and a way to give their sales a big boost while potentially reaching a new type of customer.

The Canadian market will be an important one because for cannabis-infused beverages, those products will be legal across the country, offering a complete picture of the market as a whole, rather than being limited to certain areas, like in the U.S. where recreational pot is only legal in 11 states. However, not all of those states are ready to sell adult-use products just yet. It's also important to note that wellness beverages that contain cannabidiol (CBD) derived from hemp are more readily available across the U.S. than these recreational products are, thanks to the passing of the farm bill late last year. The market for them just isn't nearly as promising. 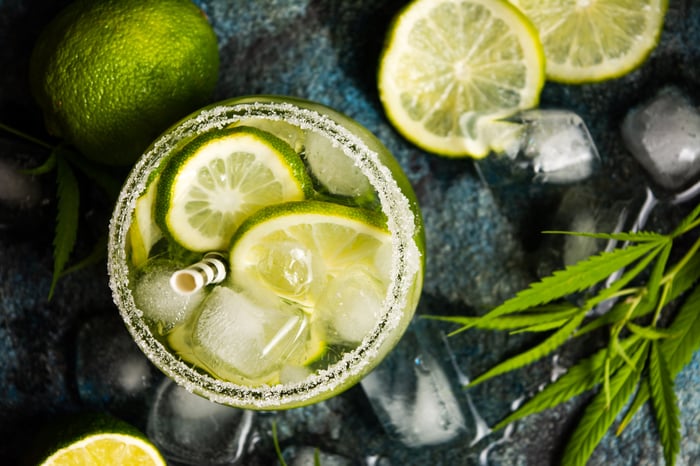 By seeing what some of the best producers in the industry can come up with and how a diverse, cross-section of people like the products, it could provide some very good insights for the beverage segment.

One company that isn't a believer

There haven't been many big deals involving the beverage industry and marijuana companies thus far, and one striking omission is Aurora Cannabis (ACB -5.29%). Aurora was previously linked to discussions with Coca-Cola (KO 3.36%) and the two were thought to be working on a deal, however, nothing ended up materializing. Earlier this year, when Aurora brought on some key personnel on board, it looked like it was getting serious about finding a partner, but there's been nothing notable resulting from that just yet.

The company said recently its focus wasn't on the beverages market, with CEO Terry Booth pointing to the limited success cannabis beverages have had thus far in the industry (likely referring to the low sales numbers in the U.S.). However, he didn't rule out making beverages that focused on wellness.

Why this is a bad move for Aurora

To assess the potential of the beverages segment by looking at the U.S., where these products have only been offered in a very limited market, is flawed from the get-go. For one, no large beverage company has shown much of an interest in making cannabis products for the U.S. right now. A big reason for that is that marijuana is still illegal federally, and that means companies can't transport it across state lines allowing them to benefit from economies of scale. Secondly, brands are worried that getting involved with cannabis could damage their image. However, that doesn't mean the demand is not there.

At the third annual Wine & Weed Symposium, cannabis research firm BDS Analytics noted there was a lot of cross-over between people who consume cannabis and those who drink alcohol. It found that 45% of alcohol consumers, in states where pot was fully legal, were also using cannabis products.

As to why cannabis beverages haven't been taking off: It's the taste that's the problem. According to Jessica Lukas, who is vice president of consumer insights at BDS Analytics, taste is the "number one consumer driver" and the biggest roadblock for the beverages segment thus far. This goes full circle back to the importance of having big beverage makers involved in the industry.

Formulating a beverage and finding a taste that works for consumers takes time, and would require a lot more effort than simply infusing baked goods with some THC.

Why the edible market matters to cannabis investors

Marijuana companies have been very aggressive when it comes to being first-movers and securing any advantages they can in what's been a very competitive industry. With what looks like it's going to be a strong quarter for Aurora coming up next month, the company has the opportunity to strengthen its brand in North America. However, by skipping over the beverage segment and taking a wait-and-see approach instead, it could be letting some of its peers take significant steps ahead of it, which might be costly for a stock that's already lost 30% of its value in just the past three months.