Please ensure Javascript is enabled for purposes of website accessibility
Log In Help Join The Motley Fool
Free Article Join Over 1 Million Premium Members And Get More In-Depth Stock Guidance and Research
By Matthew Frankel, CFP® – Aug 23, 2019 at 7:19AM

Which of these two excellent big banks is the best buy now?

JPMorgan Chase (JPM -1.86%) has historically been one of the best-run and most profitable of the large U.S. banks. In recent years, Bank of America (BAC -2.37%) has surprised many investors and has elevated its operations tremendously, and now belongs in the same conversation. In fact, of the "big four" U.S. banks -- JPMorgan Chase, Bank of America, Wells Fargo (NYSE: WFC), and Citigroup (NYSE: C), there's a solid case to be made that these are the two most impressive right now.

With that in mind, here's a closer look at the recent performance of these two incredible institutions, and which one looks like the better value right now. 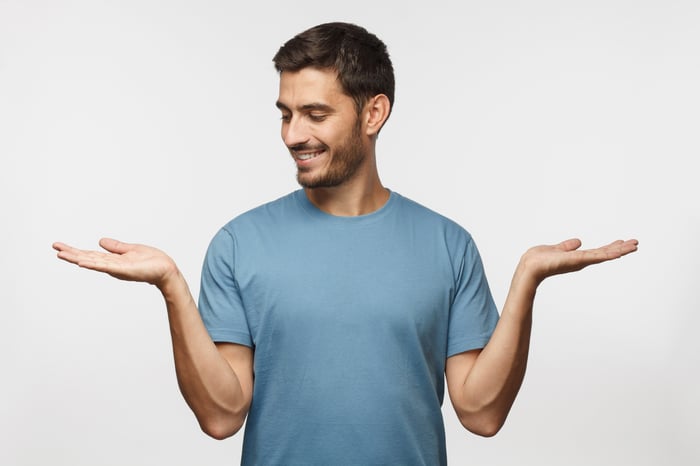 JPMorgan Chase: Incredibly profitable, but at a price

Of the big four U.S. banks, JPMorgan Chase is the most profitable -- by far. None of the others came close to JPMorgan Chase's 16% return on equity in the second quarter, and the bank's profitability has been in a league of its own among its peers for a couple years now.

Digging a little deeper, JPMorgan Chase's business is doing quite well all around. Even in sectorwide weak points like trading revenue, the bank has been performing ahead of expectations. And the bank has the No. 1 market share in global investment banking fees through the first half of the year. Asset quality is strong, and there's little for shareholders to be disappointed about in the bank's recent performance aside from circumstances outside of its control, like falling interest rates.

Having said all that, JPMorgan Chase is a top-quality bank, and that's reflected in its valuation. The bank currently trades for about 1.46 times its book value, and as you can see in the chart below, that's much higher than any of the three other big U.S. banks. 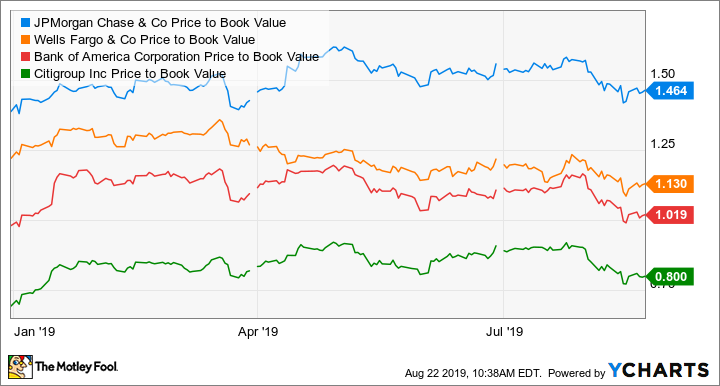 In a nutshell, JPMorgan Chase is an expensive bank stock, but you get what you pay for.

Bank of America: Tremendous improvement and a good value

It's tough to make the case that any other U.S. bank has done a better job of turning things around since the financial crisis than Bank of America. After some tough and unprofitable crisis-era years, Bank of America is now firmly in the upper echelon of major bank stocks. If I had told you a few years ago that Bank of America would have one of the best efficiency ratios of the major U.S. banks in 2019, you would have probably been skeptical, to put it mildly.

What's more, the bank continues to improve. Bank of America's second-quarter return on equity (ROE) and return on assets (ROA) of 11.6% and 1.23%, respectively, are not only strong numbers, but they are a big improvement over the 10.8% and 1.17% figures it posted in the same quarter a year earlier.

Finally, while the three other banks have had stagnant, or even negative growth in key areas of their business in recent quarters, Bank of America hasn't had this problem. The bank grew its loan portfolio by 4% over the past year -- that's twice the growth rate of JPMorgan Chase during the same period, and they were the second best.

In short, Bank of America isn't quite as profitable as JPMorgan Chase. But it's certainly getting closer.

To be clear, I don't think investors will go wrong with either of these banks. Both are incredible institutions that are doing a great job of growing their business and improving the efficiency of their operations. And with the recent decline in interest rates, bank stocks as a whole have become considerably cheaper than they were just a few months ago.

That said, out of the two I'd choose Bank of America right now. (Note: In full disclosure, Bank of America is already one of my largest stock holdings.) Simply put, I feel that unlike JPMorgan Chase, Bank of America's profitability and efficiency isn't fully reflected in its valuation, and that it has comparatively more potential for future improvements.