Ford's recent acquisition could be just what the doctor ordered to attract the future talent it needs as the auto industry rapidly evolves.

Global automakers go through phases when they need certain products to thrive and become more profitable for investors. In some automotive eras, that has meant focusing on more profitable SUVs and trucks, like they do today. In others, it was a focus on fuel economy, quality, or a growing luxury presence. Looking down the road, it's clear what the next phase will include: driverless vehicles and transportation as a service (TaaS). With the focus on those two trends, one might look at Ford Motor Company's (F -3.60%) recent acquisition of a defense contractor named Quantum Signal as a head-scratcher. But here's how it fits in brilliantly.

Ford makes a number of acquisitions on any given year, but it's not too often that Detroit's second-largest automaker acquires a defense contractor. But that's exactly what Ford did last month when it scooped up Quantum Signal for an undisclosed pile of cash. The young company boasts a 40-person team that has experience working on cutting-edge mobile robotics projects for a number of clients, including the military. Ford hopes Quantum's team can help build technology to drive its autonomous vehicles in a couple of years and hopes to use its experience with algorithm development to help power its TaaS platform.

"The number one priority is 2021, it's all about getting that done," Randy Visintainer, chief technology officer of Ford's autonomous vehicle unit, told Bloomberg in an interview. "When we first set that target, we knew this was a very, very hard problem and we weren't going to be able to do it alone." 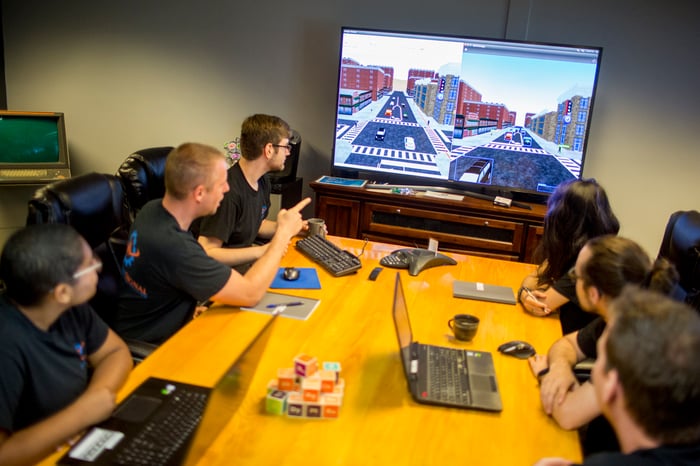 One intriguing aspect about this acquisition that many investors overlook is how a company like Quantum can attract talent that Ford historically could not. Face it, Ford's core business vehicle manufacturing business isn't winning battles with Silicon Valley for talent. Ford appreciates the culture Quantum has, and doesn't plan to move the staff from their location in Saline, Michigan, operating in a building that was a high school in the 1930s. But Ford management believes the culture, cutting-edge projects, and Quantum's successful track record can attract Silicon Valley-type talent, and that's what the automaker requires to take another step forward in developing its driverless vehicle technology.

For talent reasons alone, in addition to real-time robotic simulation and algorithm development technologies, Quantum could be a brilliant acquisition for Ford, but that doesn't mean it's foolproof. In fact, while crosstown competitor General Motors (GM -5.08%) has seemingly hit a home run with its GM Cruise -- an acquisition originally made for less than $1 billion -- that is now well on its way to deploying driverless vehicles in San Francisco, and currently valued at roughly $19 billion, Ford's acquisition results have been less impressive.

Just last month, Ford was forced to write off $182 million in value of its Pivotal Software acquisition, a company that was supposed to help Ford expand into being an auto and mobility company, which was almost equal to its full original investment. Ford has also axed its ride-hailing shuttle service acquired in 2016, named Chariot, for $65 million. Ford hopes that Quantum will be a big win for the automaker, and plans to let the company operate independently much like GM did with its acquisition now referred to as GM Cruise. Good news for investors worried the acquisition will be torn between projects, Quantum will drop all of its defense work and focus entirely with Ford to develop robot taxis by the automaker's own 2021 target.

Ford currently finds itself in a difficult position. It must adapt for the upcoming automotive evolution, which will be driven by driverless vehicle technology and TaaS, and it must position itself quickly or risk being left in the dust by a range of competitors from Silicon Valley to Detroit, and more scattered across the globe. To keep up in the race toward our driverless future, Ford has to attract the talent capable of developing the technology to stay with, or ahead of, the competition and that means taking risks with acquisitions.

What should Ford investors think?

General Motors has proven that a Detroit automaker is capable of taking a small acquisition and turn it into a home run within a few years time, and if the undisclosed price was right, Quantum could prove to be a brilliant acquisition for the folks at the Blue Oval if this brings in the talent and technology capable of pushing Ford into the next phase of driverless and TaaS development. But make no mistake, this is only a step forward for Ford's overall driverless ambitions -- it has much work to do. Only time will tell if Quantum becomes as brilliant an acquisition as some of Ford's competitors have completed, but it's certainly a risk Ford has to continue taking.