Please ensure Javascript is enabled for purposes of website accessibility
Log In Help Join The Motley Fool
Free Article Join Over 1 Million Premium Members And Get More In-Depth Stock Guidance and Research
By Rich Smith – Aug 25, 2019 at 11:31AM

A field test shows the new Funkoverse board games should boost sales nicely, but the products' added complexity could dent margins.

In just a little over three years, this tiny producer of pop culture consumer goods based in Everett, Washington, has managed to triple its revenue, growing from barely $250 million in 2015 to some $768 million in sales over the last 12 months, according to data from S&P Global Market Intelligence.

Funko has done this by capitalizing on -- some might even say creating -- consumer affinity for branded vinyl figurines representing characters from Harry Potter to the Marvel Universe to DC Comics. Dubbed Funko Pops, these tiny dolls are manufactured efficiently, sold cheaply (many for less than $10 a "pop"), and hawked relentlessly at pop culture gatherings such as Comic-Con and Gen Con, the board-gamers convention.

Funko may not yet be in the same league as a toy maker like Hasbro, whose annual sales are measured in the billions of dollars. It may not yet be as profitable -- operating margins are only about 10% at Funko, versus 13% at its bigger rival. But one thing Funko definitely has is momentum.

The question investors need to ask is whether that momentum is going to translate into superior profits. 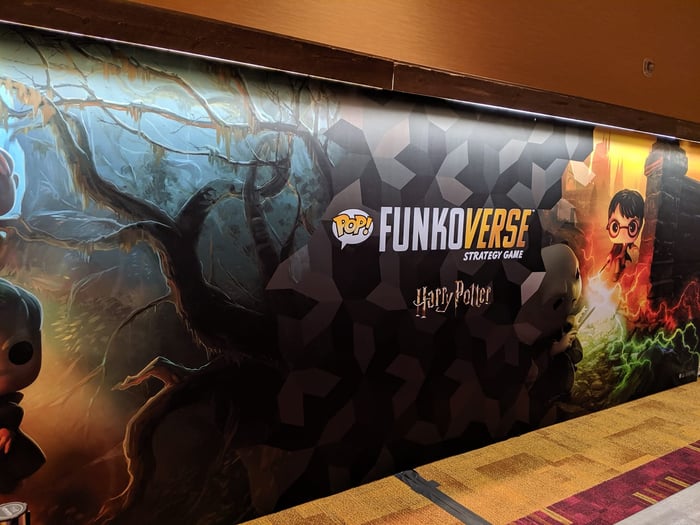 In Funko's February earnings call, company president Andrew Perlmutter observed that "customer diversification continues to be one of our key strengths," explaining that only 9% of the company's sales are to any one retailer-customer, and how Funko is continuing to work "to improve and grow our B2C business" -- selling Funko toys directly to the consumers who collect them.

But in one respect at least, that diversification remains a challenge for Funko.

According to Perlmutter, sales of Funko Pop figurines "accounted for 82% of total sales" in 2018. And that means that to a very great extent, Funko remains dependent upon this one (admittedly very popular) product.

In an attempt to diversify its revenue streams -- to both reduce dependence upon a single product category and also help achieve the 21.5% long-term earnings growth that analysts expect from the stock -- Funko announced earlier this year that it had acquired board-game maker Forrest-Pruzan Creative.

Not long after -- at Comic-Con in San Diego in July to be precise -- Funko announced the first fruits of this expansion into games, announcing that it would soon begin selling "Funkoverse ... collectible strategy board games," played using new three-inch figurines.

The Funkoverse games aren't due to hit the market before Oct. 1. But I was able to get a sneak peak at the product in person when Funko unveiled them at the world's biggest board-gaming convention, Gen Con in Indianapolis, in August.

And after giving the games a close look, I think there's both good news and bad news for Funko investors.

Good news first: Funko's booth, and a dedicated play room it reserved at the Indiana Convention Center, saw strong foot traffic over the course of Gen Con. In just a few short days, Funko sold out of at least two game variants that I reviewed -- one based on the Harry Potter franchise, and another on (believe it or not) the 1980s-era sitcom Golden Girls.

Analysts currently forecast that Funko's sales will grow a whopping 24% this year, but then begin to trail off toward 12% growth in 2021. But assuming the sales momentum I saw at Gen Con holds up, I see every likelihood that the purchase of Forrest-Pruzan is going to pay off in accelerated sales growth -- probably into 2021 as well as 2020.

That being said, there is a risk that comes with Funko's expansion into games.

In last quarter's earnings conference call, Funko told investors that as a result of tariffs instituted during the Trump trade war with China, it's expecting a half percentage point hit on gross margins in Q4, despite its best efforts to shift some of its manufacturing out of China.

That may not sound like much, but Funko is already giving up 16% of its gross profit to the companies that license the intellectual property needed to manufacture its products. Moreover, S&P Global data confirms that gross margins declined (year over year) at Funko in three of the past four quarters.

Here's what all this means to investors: Up until now, 82% of Funko's revenue came from figurines sold as individual items. I have to imagine that the simplicity of the product helped to streamline manufacturing, keeping costs low and margins high. Despite this, Funko's gross margins were already beginning to slip before the Funkoverse introduction.

Now, the company is expanding its offerings to sell a game -- every box of which contains upward of 50 separate figurines, bases, cards, tokens, dice, and other game pieces. That's a lot more "moving parts" being introduced into the Funko machine. And yet, the company is pricing each two-figurine game at just $24.99 -- not much more than Funko charges for two ordinary-size figurines sold separately on Amazon.com today. Four-piece games are being advertised at $39.99 -- almost precisely what four ordinary figurines would bring in, without all the ancillary pieces.

It seems to me that with all the additional complexity of its new product, Funko should be charging a higher price for its Funkoverse games, but it's not. Maybe pricing low is something management felt it needed to do in order to break into a new market. Be that as it may, my hunch is that once Funko's new games hit the market, its profit margins will also take a hit.