As yields on government debt reach historically low levels, income investors are finding it difficult to grab attractive yields above five percent. Currently, there is one mega-cap (market cap above $200 billion) company with a dividend yield above five percent, which is AT&T (NYSE:T). At the time of writing this article, the 10-year U.S. Treasury yield is hovering around 1.58%, a variance of 4.19% from AT&T's 5.77% trailing dividend yield. 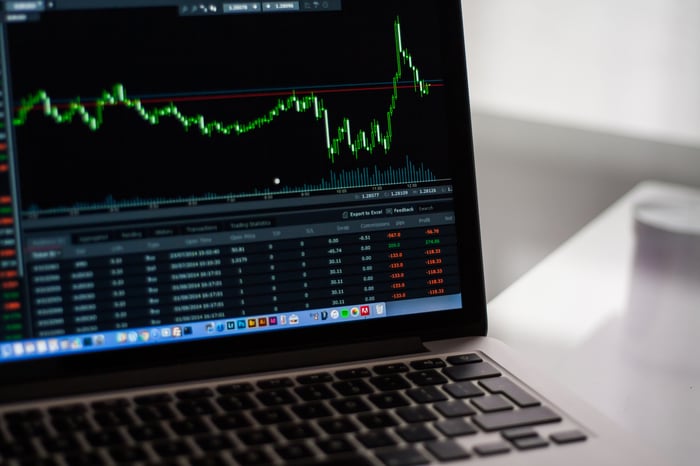 The large yield is leaving investors scratching their heads wondering if AT&T's current dividend is sustainable and whether the company will be able to keep raising its dividend by the historic 2.1% annual growth rate. To determine the strength of AT&T and the sustainability of its dividend, investors need to analyze three fundamentals within the company: consistency and growth of free cash flow, earnings growth, and the amount of debt which AT&T holds.

The largest consideration when assessing the strength of a mature company paying a sizable dividend is free cash flow. AT&T is generating consistent free cash flow with a reported $8.9 billion during the second quarter of 2019. AT&T is seemingly well-positioned to weather a storm with a dividend payout of around $3.7 billion each quarter, assuming the net income growth rate exceeds the 2.1% historical growth rate of the dividend. 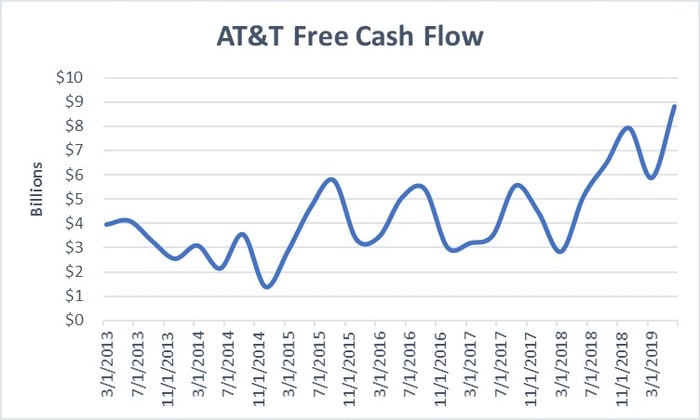 Driving free cash flow is the Communications segment of AT&T, at 79% of revenue during the recent quarter. This segment includes DirecTV, which has experienced a loss of 778,000 subscribers due to the transition to streaming content, which has been a concern for shareholders. AT&T may be able to offset losses with an increase in subscriber payments, or additional growth from a different revenue segment such as WarnerMedia.

Operating income for WarnerMedia was up 10.3% during the second quarter, showing promise from the recent acquisition of Time Warner. This growth strengthens the case that AT&T's free cash flow is in safe territory going forward, assuming the Communications segment remains stable and DirecTV limits further subscriber losses.

As AT&T transitions from a telecom company to a media content conglomerate, earnings diversification widens. AT&T now operates in four revenue segments which include Communications, WarnerMedia, Latin America, and Xandr. All these segments together increased operating income by 2.6% from the second quarter of 2018.

Increased growth in the company may get an assist from the WarnerMedia segment, currently making up 18.6% of operating revenue. In the recent letter to shareholders, the CEO Randall Stephenson stated that AT&T was working on "an exciting new premium subscription video-on-demand service from WarnerMedia that will draw on the rich and deep content libraries of HBO, Warner Bros., and Turner." The expected introduction of this service is stated to be announced at the end of 2019.

Developing a streaming service may be just what AT&T needs to utilize the vast library of content under the company's umbrella and capitalize on the shift to streaming taking place in the market. If that is the case, there may be additional opportunity for this segment to grow and push operating revenue further, driving earnings growth for AT&T and reducing dependency on the Communications segment.

After both DirecTV and Time Warner acquisitions, AT&T took on a significant amount of debt, most of it due within the next 10 years. The largest debt hurdle will be in 2023 when the company will have to pay $12.6 billion. Payments will become less of a burden thereafter. Interest rates on debt are currently high, hovering around 6%; however, the low-interest rate environment may give AT&T the upper hand to refinance debt and lessen the cost of it. 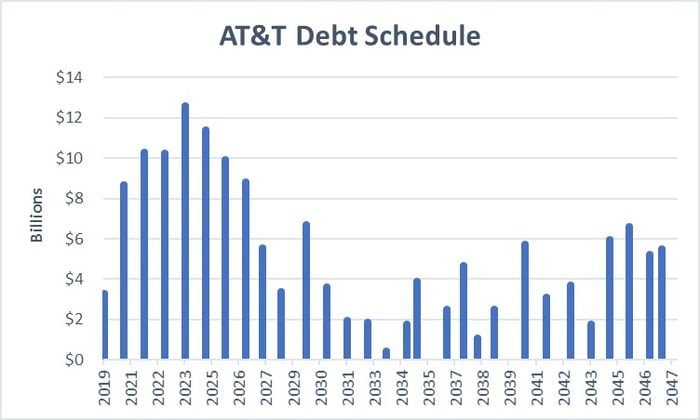 Assuming that AT&T doesn't increase debt to fund current operations, the debt-to-equity ratio of 1.0 puts the company in a semi-strong position with current growth prospects. A direct competitor in the telecom segment is Verizon Communications, with a debt to equity ratio of 2.4 for comparison. The sticker shock of $158 billion in long term debt may seem overwhelming, however, when analyzed against the entire financial position of the company, it seems sustainable.

In the second-quarter report, Randall Stephenson stated that he will take a hard look at share buybacks in the back half of 2019. Share buybacks have been a controversial methodology, specifically in companies that maintain a large debt load. In 2016 and 2017, General Electric was heavily in debt and in a position to pay down debt or buy back stock. Jeff Immelt, the CEO of GE at the time decided to purchase over $21.4 billion in GE shares at an average price of $30.30. Currently, GE is trading around $9 per share. This buyback strategy turned out to be a large mistake in GE's history, leaving shareholders frustrated that paying down debt wasn't a focus of the company.

As AT&T decides whether to pay down debt or buy back shares, investors are left with a signal from management that the dividend may not increase in the near future. As management gets a handle around debt going into 2023, we could see an increased focus on the financial health of the company, limiting further obligations such as dividend increases.

The safety of AT&T's current dividend appears stable based on current fundamentals and potential growth within the company, specifically within the WarnerMedia segment. As AT&T invests further into 5G and capitalizes on the distribution of content the company now has at its disposal, AT&T is in a position to stay in an income investor's portfolio for quite some time.