You don't want to bail on these growth stocks.

Despite the market's recent turmoil over trade tensions with China and concerns about a recession, there's no question that 2019 -- as well as the last several years -- have been kind to stock market investors.

The broad-based S&P 500 is up 14% so far this year, and has nearly tripled over the last decade, handsomely rewarding investors who bought shares during the depths of the financial crisis. So it's not surprising that plenty of stocks have doubled in recent years, but investors may be nervous about holding high-priced growth stocks when headlines are warning about economic doom.

Fear not: Three of our Motley Fool contributors have got you covered. Keep reading to see why Target (TGT -1.81%), Innovative Industrial Properties (IIPR 2.15%), and MongoDB (MDB -1.87%) all have room to run higher. 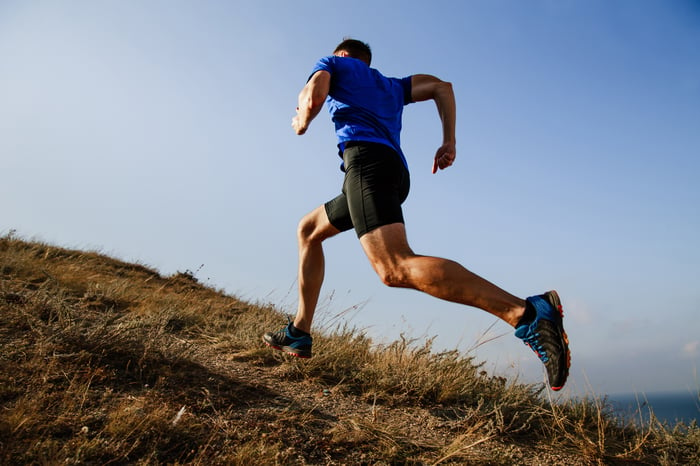 A retailer breaking the mold

Billy Duberstein (Target): While you may think only high-flying tech stocks have doubled recently, did you know that Target's stock has nearly doubled over the last two years?

In 2017, investors were very concerned over the headwinds that e-commerce was posing to traditional retail, and Target wasn't immune -- back then, it was posting same-store sales declines.

Around that time, CEO Brian Cornell launched an ambitious strategy to compete in this new retail world, with investments in e-commerce, smaller-format stores, new brands, and lower prices.

And Target leveraged its biggest asset -- its roughly 1,800 stores positioned close to customers -- distinguishing it from more-remote big-box superstores. That enabled Target to offer features like same-day pickup, and in December 2017, it bought same-day delivery service Shipt for $550 million to further bolster its time-saving capabilities.

So why might there still be room to grow? Well, legacy apparel-focused retailers like Macy's, which currently trades at a single-digit P/E ratio, are having difficulty adapting and face concerns about extinction. But retailers thought to be winners in this new age, such as discounters and big-box superstores Walmart and Costco, are trading at P/E ratios in the 20s or even 30s.

Target had previously been grouped in the former camp, but today it's looking like it might belong in the latter. Yet even after its recent stock surge, its P/E is just around 17, which is why I think this stock may still have room to run.

The green rush cannot be contained

The marijuana REIT model is really no different than in any other industry. IIP, as Innovative Industrial Properties is also known, acquires land and assets used in the growing or processing of medical cannabis, then leases these properties out for long periods of time. The goal is to generate healthy rental income, then possibly sell these assets many years down the line for a capital gain.

With IIP operating strictly in the United States, and the U.S. projected to be the leading market for marijuana sales over the long run, the runway for IIP is massive. With most U.S. cannabis growers having minimal access to nondilutive financing, it may make sense to lease growing and processing facilities from a cannabis REIT like IIP.

At the beginning of the year, it had 11 properties in its portfolio. But as of mid-August, the company has boosted its presence to 27 properties in a dozen U.S. states. IIP, most importantly, has about a quarter of its asset portfolio in California, the crown jewel of all cannabis markets. With a weighted-average lease length of 15.5 years, and a current yield on invested capital of 14.5%, IIP should get a complete payback on its investments in less than five years, then have an additional decade, on average, to reap the rewards of rental income.

And it has the ability to generate modest organic growth. Each year, the company passes along a 3.25% rental increase to its lessees, and charges a 1.5% management fee that's based on the annual rental rate. It's not eye-opening organic growth, but it certainly helps pad the company's net operating income.

If there is one downside here, it's that REITs raise capital to buy new assets by selling shares of their stock. That means dilution is likely to continue for innovative Industrial Properties' shareholders. But as long as it continues to make smart long-term deals with its capital, then there should be plenty of potential for this stock to head higher.

Taking over the database industry

Jeremy Bowman (MongoDB): MongoDB may have a cartoonish name, but there's nothing silly about this growth stock. Shares of the company, which is disrupting the database industry, have jumped nearly 400% over the last three years, and have more than doubled from a year ago.

The company's own monster sales growth is driving the stock's surge. In its most recent quarter, revenue jumped 78% to $89.4 million, and revenue growth is actually accelerating thanks to MongoDB Atlas, the company's proprietary cloud-based platform that saw sales soar by an incredible 340% to claim 35% of the company's revenue in the first quarter. That figure, more than any other, shows how MongoDB is capitalizing on the transition to the cloud and the need for "sophisticated managed database offerings," as CEO Dev Ittycheria put it.

Earlier in the year, MongoDB investors were spooked by concerns that Amazon.com was launching a competing product called DocumentDB, But Mongo's last two earnings reports seemed to have put those worries to rest. In addition, the threat of Amazon as a challenger to incumbents is often exaggerated. The company has tried and failed to disrupt a number of industries including supermarkets, smartphones, diapers, online travel, daily deals, restaurant delivery, and e-commerce software management.

Still, MongoDB's stock is down about 20% since its peak following its June earnings report. And with its second-quarter earnings report right around the corner on Sept. 4, now could be an excellent time to pick up some shares. Worth about $8 billion today, the stock could still easily double, and another round of blowout growth would likely send it higher.

Analysts are expecting revenue in the second quarter to increase 59.3% to $91.6 million, and for its adjusted net loss per share to narrow from $0.41 to $0.28. Both estimates are within the company's own guidance range, and it's made a routine of blowing past its own forecasts. Don't be surprised if it does it again next week.

Market Crash 2.0: 3 Stocks to Save Your Portfolio